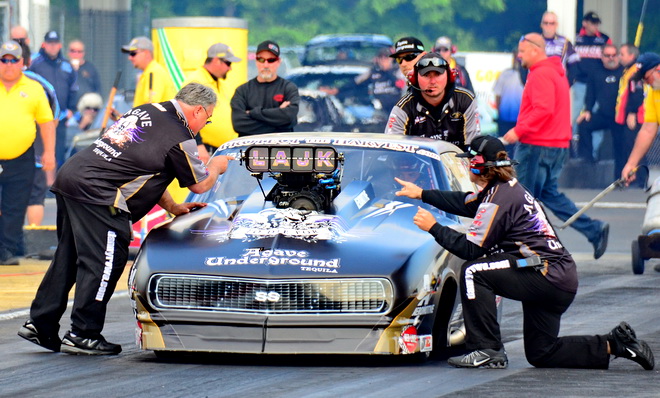 While no stranger to the winner’s circle in sportsman racing’s upper echelons, Steve Matusek – driver of the Agave Underground Tequila NHRA Pro Mod Camaro and co-founder and president of Aeromotive, Inc. – had a landmark weekend at the recently completed NHRA Pro Mod Drag Racing Series event in Bristol, Tennessee.

After qualifying 7th amongst a ferocious 16-car field with a 5.992-second, 241.15mph pass, Matusek dispatched all three of the series’ top points earners – Rickie Smith, Mike Castellana and Mike Janis – en route to a final round matchup with fellow first-time finalist Pete Farber. 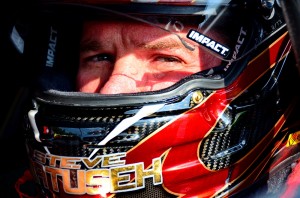 In a classic Chevy versus Mopar, all-blower battle where Matusek was the odds-on favorite (Matusek is 2-1 against Farber in previous events), the tricky track conditions created by high temperatures and blazing sun finally caught up to the Agave Underground Pro Mod team. Farber took a slight advantage off the starting line and Matusek wasn’t able to bridge the gap after being forced to lift off the throttle when his tried-and-true Camaro got out of shape before half-track.

“When we got done with qualifying – looking at the ladder – we were thinking, ‘Geez, if we do our jobs, we could really make up some ground in the points,’” says Matusek, speaking of he and teammate Danny Rowe. “We knew we had good cars – Danny definitely had the best car on the property – and if we could get through the first few rounds and meet in the final Danny could have left Bristol number-one in the points.

“That plan went awry early, unfortunately, but we were able to make the best of it by taking out Rickie [Smith], [Mike] Janis and [Mike] Castellana,” he continues. “In the final round against [Pete] Farber, the car went to the right and I tried to bring the damn thing back, but it didn’t want anything to do with it. I was hitting the throttle, but I guess I felt like I had to know when to say when – and when the thing is heading for the timing blocks – that’s when to say when, let’s put it that way.”

Though he came up one win-light short of a picture-perfect weekend, Matusek’s march to the final round, including the one-by-one trailering of a true murderer’s row of Pro Mod heavyweights, still stands as a career-defining moment for the Midwest-based racer.

“For me, it’s gratifying just to be in the game,” says Matusek, who currently sits fourth in the NHRA Pro Mod Drag Racing Series points hunt, just ahead of teammate Danny Rowe in fifth. “To be a part of that top five right now – at five races into the season with basically a new driver and new team – is very satisfying, to say the least.

“It’s been a transition and it still is,” he continues. “I’m still not happy with what I’m doing in the car, but I’m going to get happy. I’m determined to step up and contribute to the team the way that I should, and I’m going to get there. I haven’t done anything spectacular. I’m not winning the round on reaction time. I’m still working; I’m still a work in progress. But at the same time, as a team we’re not making mistakes. We’re consistent, and if you’ve got to race us, you better be on your game because we’re not going to screw up – that’s something I take a great deal of pride in.”

Heading into the sixth race of the season at the beautiful Summit Racing Equipment Motorsports Park in Norwalk, Ohio, Matusek couldn’t be more optimistic.

“It’s going to be a hot one,” he says, speaking of the series’ final event over the Fourth of July weekend before an extended break leading up to the U.S. Nationals. “As a driver, you’ve always got a lot of confidence with Jimmy Rector calling the shots, but I’m especially confident when it comes to these hot race tracks where it’s clearly a tuner’s race. Believe me – Danny and I both are looking forward to making a move toward those No. 1 and 2 spots in Norwalk.”