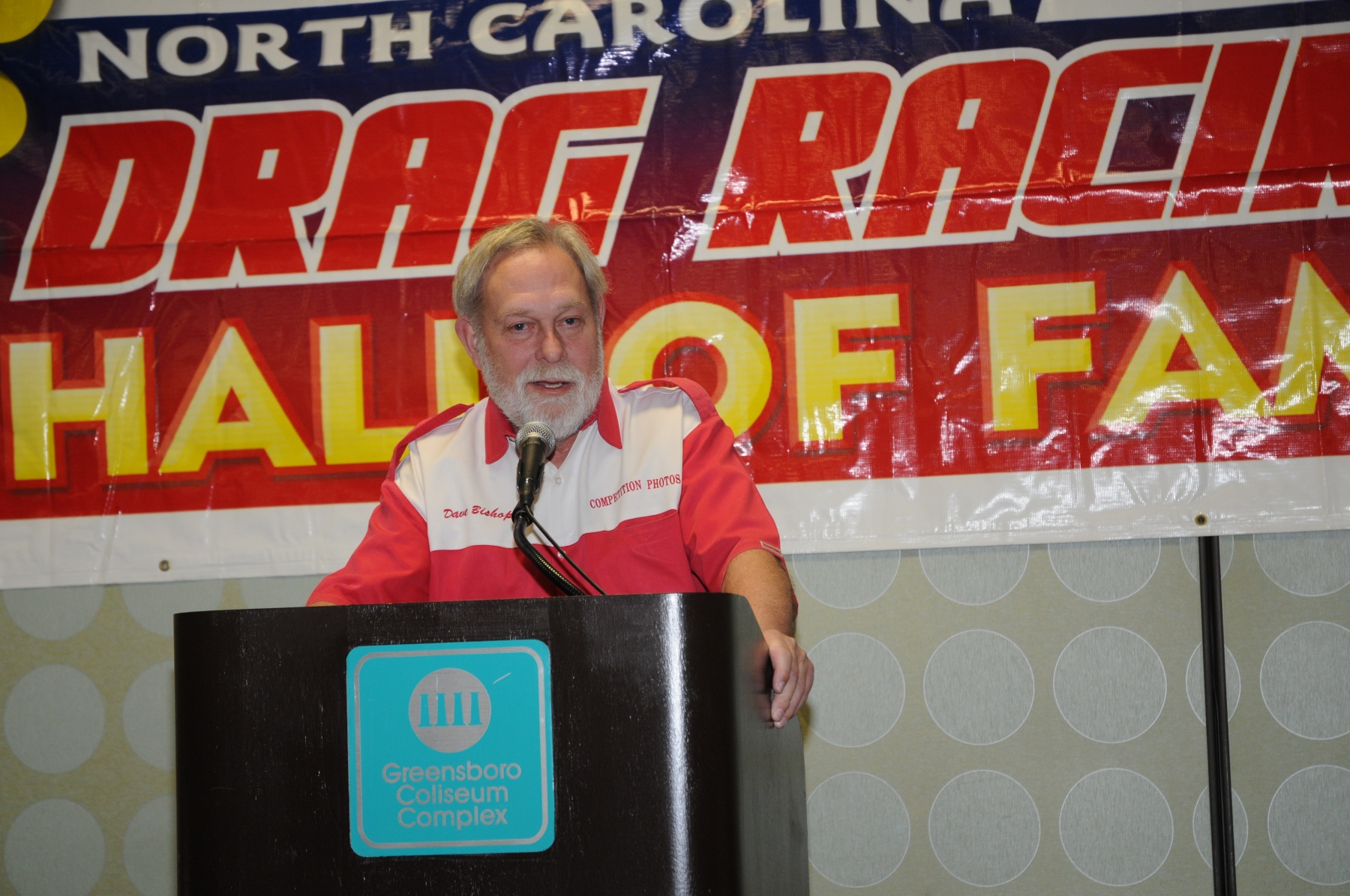 David Bishop, the founder of East Coast Drag News and a former Drag Illustrated contributor, passed away January 12 at the age of 73. In this DI Tribute, Greg Burrow shares the story of Bishop, who he was proud to call a colleague and best friend.

During the fall semester of 1967 at High Point College, I was fortunate to make the acquaintance of a young man that would become that person in life who you can truly say was your “best friend.”  Drag racing was our mutual interest. He, from the eastern shore of Maryland, home of MIR, York, Cecil County and Delmar – all dragstrips that David was able to call home. Along with his cousins, Tim Bishop, Jay and Buck Wheatley, and with other members of the Junior Stock racers of the day, the beginnings of a lifelong love affair with the dragstrip was forming.

As for myself, I was fortunate to grow up at local tracks like Piedmont Dragway, Farmington Dragway, and later the grand facility in Rockingham where David and I had many adventures, both while in college and afterwards as true members of the media.

After graduating from HPC with a degree in business and a minor in journalism, David found himself remaining in the High Point, North Carolina, area and beginning a career with the Pilot Life Insurance Company, where a gentleman named Al Taylor showed David the ropes and helped him be successful in his chosen profession. 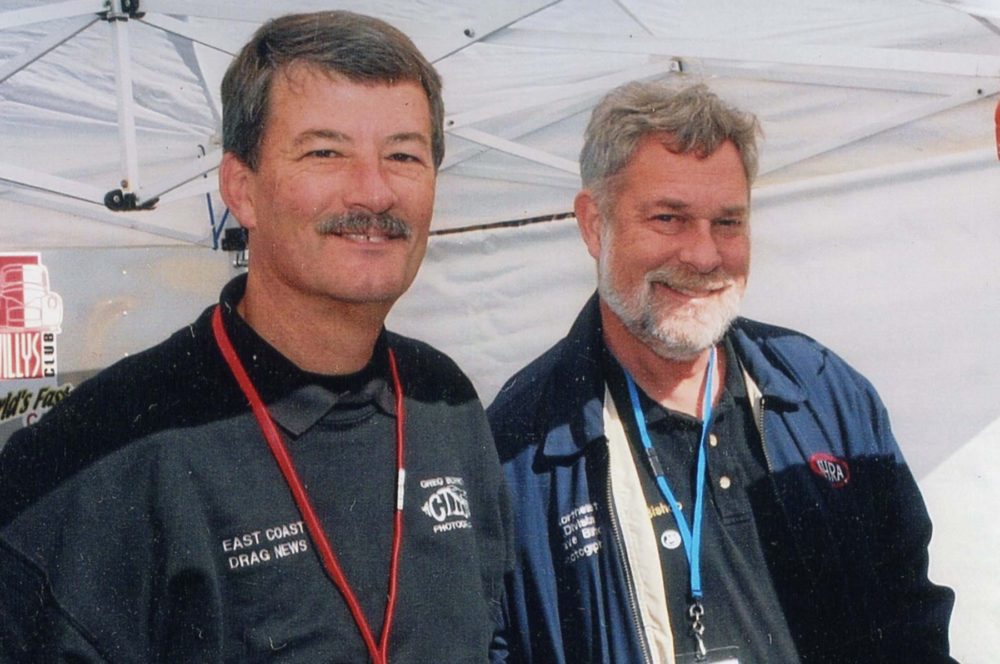 The author and David Bishop (right)

But always the racer, David shared his idea to form Competition Photos, Ltd. to provide professional photo-journalism to tracks in the area, as well as the occasional trip back home or to catch up with friends at the Little Guy Nationals in Suffolk, Virginia. During this time, I was introduced to two local racers, Mike Kennedy and Gary Dehart, that allowed David and myself to tag along as they raced, and won, throughout the Southeast. It was Mike who coined the name “Deluxe Dave” one early morning as we awaited David’s arrival for a trip to Piedmont Dragway. This was to become the title for his Editor’s Column in the upcoming East Coast Drag News.

This led to a very recognizable van that was customized by Jerry Tucker and lettered by ChromaGraphics with the recognizable logo. Also, while in North Carolina, David enjoyed a membership in the local Jaycee group in High Point, and was the driving force behind what would become “the” event in the area, as well as a highly profitable and long-running attraction that would be known as “The Oak Hollow Boat Drags.” The event continued even after David’s move back home due to his father’s illness. That led him to take over the family business, The Hobby Horse, an audio-visual company located in the historic district in his hometown, Easton, Maryland.

With all these things on his plate, David somehow found time to marry the love of his life, Louise, and was rewarded with a great life partner and two wonderful kids, Brian and Angie. Louise and the kids were a great source of support, even after David embarked on his most ambitious adventure into magazine publishing with the start of East Coast Drag News. The magazine became a great source for all forms of sportsman racing and truly provided coverage up and down the entire East Coast.

Somehow, during this time, David found time to mentor and help start Bobby Bennett’s Competition Plus internet publication that has grown into one of the few premier sources for drag racers all over the United States and Australia.

Also during this time, David used the heading “Deluxe Dave” for his editorial column in East Coast Drag News and coined the phrase “World’s Fastest ’55 Chevy” for his friend and hero, Charles Carpenter. 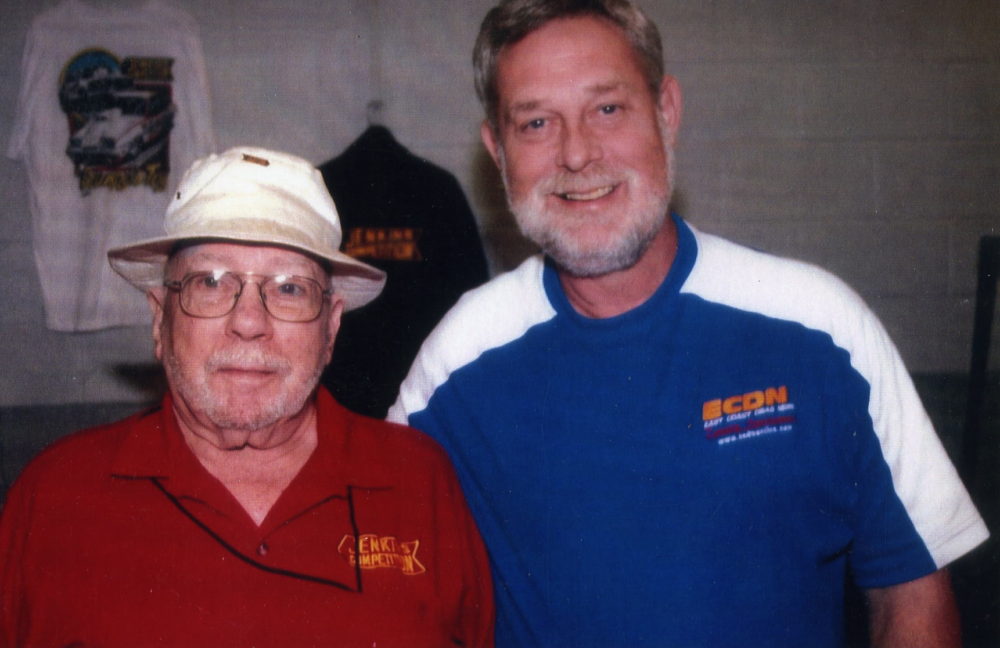 David Bishop with one of his heroes, Bill “Grumpy” Jenkins

So it was no surprise when his longtime friend, Steve Earwood, proposed David for the Pioneer Award from the NC Drag Racing Hall of Fame. The induction took place in 2017 during the Hot Drag & Drag Expo, in which David was a fixture and allowed him to catch up with old friends from the IHRA days, as well as local track operators.

All of these events were great moments of pride for David, but as he and I would often discuss, his grandchildren, Callie and Harrison, would soon be the topic of discussion. In what would be David’s last trip to North Carolina, he and Louise brought Callie down to tour possible colleges in the North Carolina area. Of course, one of them was High Point University.

So it is was with great sorrow that I learned of David’s passing from complications due to the COVID-19 virus that complicated other health issues. The loss of a friend is always difficult, but the loss of a “best friend” is profound. We can only hope to meet again one day, on the other side, where I am sure I will find David in deep conversation with the likes of Bill Jenkins, Ronnie Sox, Darwin Doll, Sonny Leonard, Mike Kennedy and others. Hope to see you then, my friend.