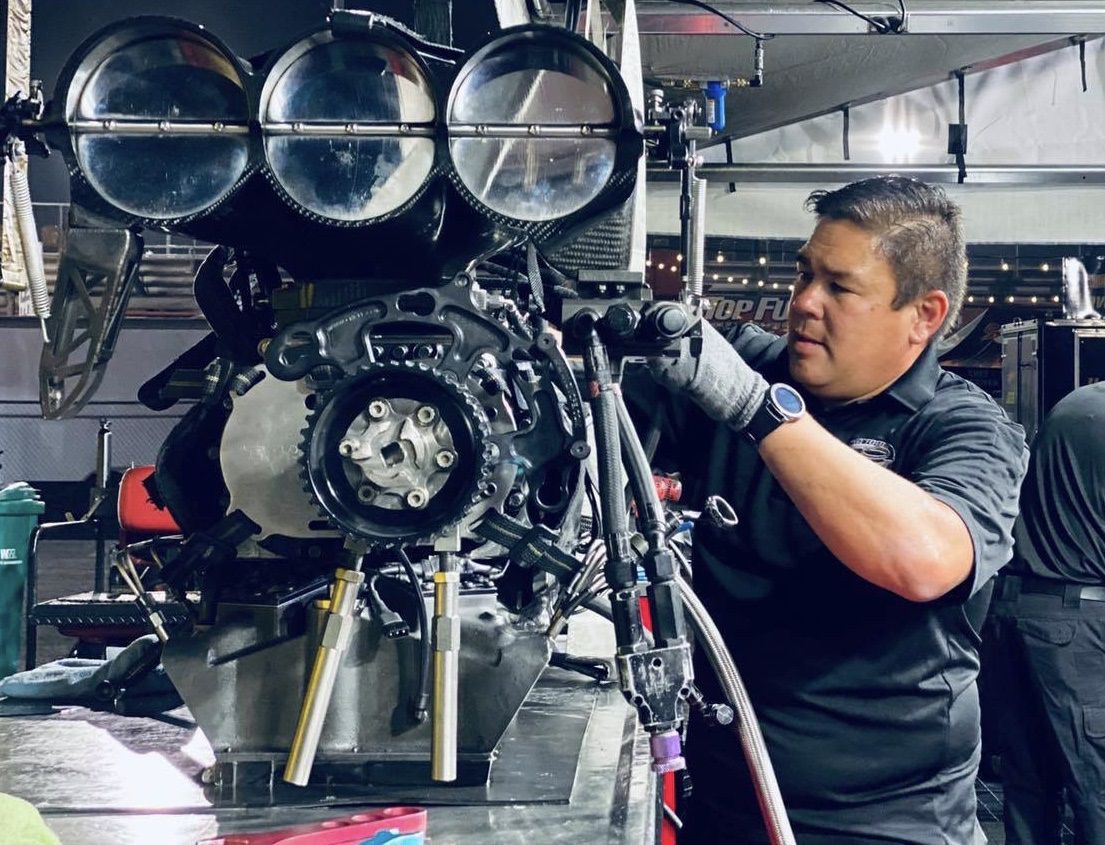 Those who knew Eric Lane often talked about his brilliance as a tuner and a fierce drive to win.

But more than anything, those who knew Eric Lane were touched by his innate ability to lift everyone’s spirits. As talented as he was working on nitro cars, his ability to make someone smile and his penchant for fun was unmatched.

Lane was revered by everyone in the sport, universally respected as one of the good guys in drag racing. It made the news of Oct. 19 that much more tragic as Lane, 47, was killed in a roadside accident in Mineral Wells, Texas.

Lane was the crew chief for Cruz Pedregon’s Snap-On Tools Dodge Charger Funny Car, and the team was between Texas races in Dallas and Houston when the devastating news came. He leaves behind his wife Kelly and their daughter Melaynee, as well as a huge number of friends in the industry who rarely saw Lane without a smile on his face.

His passion to getting a Funny Car to go fast was impressive, but his way with people left an even bigger mark.

“From the first time I met Eric, we instantly clicked,” said Caleb Cox, Cruz Pedregon Racing General Manager. “He was a football player, wrestler and martial artist, and he was the type of guy that you loved to respect and you would do anything for at the drop of a hat. The laugher, jokes and racing stories would have you in tears for hours.”

It’s a sentiment repeated by everyone who knew Lane, who was affectionally known as “Hop” or “Hopsing” to those in the sport.

In 2001, he jumped to John Force Racing, working with legendary crew chief Jimmy Prock and championship-winning driver Robert Hight. He also played an integral role in Brittany Force’s rookie season in Top Fuel. It wasn’t an easy season for Force, who was the first in her storied family to race in the class, but Lane’s presence played a major role in her success.

In a post on social media, Force talked about Lane’s positive influence, saying, “Your smile brought an energy to the racing community that will always be with us. Thank you for everything you taught me during my rookie season. So many of those lessons have built me in to the driver I am today, and that is something I will never forget. You will be forever missed Hopsing.”

While learning under Tobler, he brought new ideas, a bright mind and an unforgettable passion to the team. Capps knew instantly Lane would bring something special to the team.

“I always raced against him until he was a member of our team, and I didn’t despise him, but I hated racing him,” Capps said. “I would always seem him on the starting line with Jimmy Prock and I knew he was a huge part of that success. They were so tough to race throughout those years, so when he became available to come to our team, and then getting to know him, it turned out we had so much in common.”

When Lane joined the team, his expertise was unmistakable. It brought to the best in everyone, including Capps, who loved Lane’s passion for winning.

“Getting to work with him was something else,” Capps said. “The guy had so much passion for getting up in the morning and going to the racetrack. He absolutely loved going to battle on a racetrack and the whole process of trying to find a way to win. I’m so glad I got to work with him. I learned so much from him.”

He played a huge role in rebuilding Bob Tasca’s Funny Car team in recent years, with Tasca repeatedly noting his genius. From there, he latched on with Pedregon at the tail end of last season, making a tremendous impact in a short time.

“Eric was filled with a lot of passion for this sport and the desire to win and succeed. He was respectful but fierce once we got on the track,” Pedregon said. “Eric was energetic and shared the same enthusiasm for the sport as I do. He was known for his skill in working with NHRA teams but even more so for his upbeat personality and bringing smiles to everyone on the team and those who stopped by the pit. The sport has lost one of its very best.”