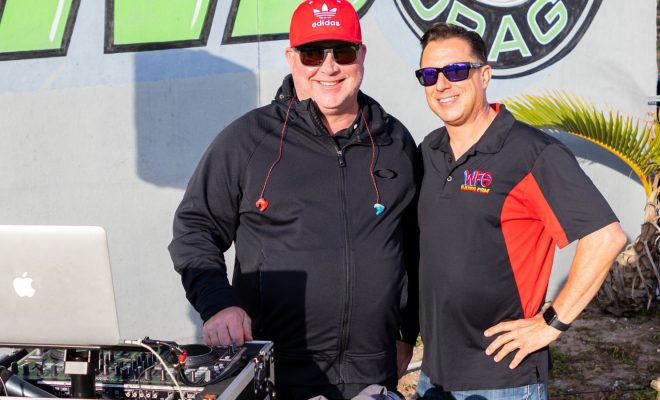 Any drag racing fan, whether seasoned or new to the sport, knows the announcer is a major part of the show that is a drag racing event. They entertain and inform the fans, while also keeping racers in the pits up to date on what’s happening.

Next week, fans and racers at the second annual CTech Manufacturing World Doorslammer Nationals presented by JEGS will benefit from the announcing duo of Joe Castello and Al Tucci, as well as DJ and starting line interviewer Jason Logan.

As an NHRA national event announcer and the host of the popular WFO Radio podcast, Castello (above, right) brings to the table his extensive knowledge of the stars of Pro Stock, Pro Mod and the various sportsman classes that were added to this year’s lineup. The south Florida native was on the mic at the inaugural World Doorslammer Nationals in 2020.

Tucci is a legend in the outlaw eighth-mile drag racing world, known for his energetic, passionate announcing style. He’s announced a wide variety of drag racing events across the country for decades. His rapport with the drivers, crew chiefs, team members and sponsors lends credibility and personal details to his work in the announcer’s booth. This is his first year announcing at the World Doorslammer Nationals.

Logan (above, left) is recognized by race fans for his crowd work as “Mr. Mello Yello” at NHRA events over the last several years, but he’s also a popular DJ in his native Orlando area, working weddings and corporate events. He combined both talents at the inaugural World Doorslammer Nationals, playing music from his DJ booth near the starting line.

Drag Illustrated recently spoke with the trio to get their thoughts on last year’s event and to preview the second annual race.

What was your biggest takeaway from the event last year?

CASTELLO: The stars of Pro Stock and Pro Modified are as colorful and interesting as any in all of motorsports. Focusing on them and highlighting their talents, abilities, and frankly, sacrifices to be a part of high-level motorsports, just creates intense drama. We know it’s there, but to focus on it is really what this is all about. 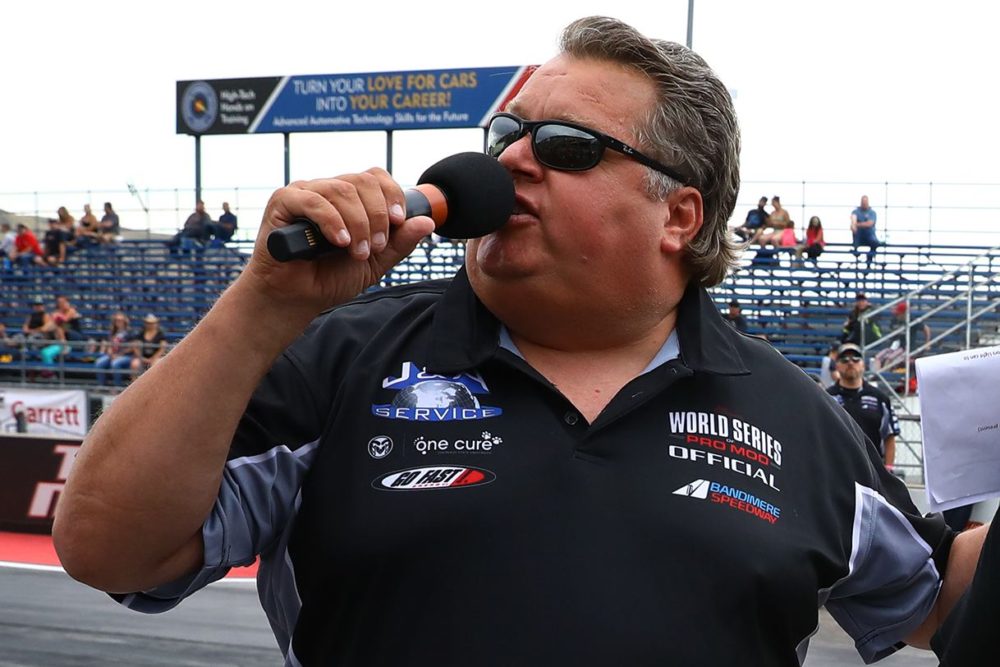 TUCCI: I see a lot of things – I like to call it “the bird in the nest” when I’m looking and watching from up in the tower. I’m not just watching cars and burnouts. I’m watching the people and how they respond. I was watching the people in the stands and the people on the starting line. It was like almost like everybody got a backstage pass at the biggest rock concert in the world. That little track turned into a national event track for that weekend. I’d see and hear the fans mingling. Even the racers were so relaxed compared to when they’re at an NHRA race. It was cool to see the fans get in for the price you guys charge and enjoying that kind of show. It was amazing, the feeling and the energy.

LOGAN: My biggest takeaway was that different kinds of entertainment can work at a drag race. I’m there to entertain people. To see people that normally don’t come out of their shell on the starting line, the music element helped them loosen up when they were heading up to the line. It provided for more of a fun environment. We were like family out there racing. We’re on different teams, but we’re all here for the same reason. Music just brings people together. You see Randi Lyn [Shipp] dancing over here, then the guys on Greg Anderson’s car are in the other lane moving around. It made the competition a little more palatable.

Was there one class that really stood out to you?

CASTELLO: I have always been a diehard Pro Stock fan from the first time I walked through the gates in 1980 and saw Bill “Grumpy” Jenkins and “Dyno” Don Nicholson in the staging lanes of Gainesville Raceway. I love all forms of motorsport and drag racing in particular, but for me, the factory hot rods just connect with my personality.

TUCCI: It was Pro Stock. I see Pro Mods all the time. I see the NHRA guys cross over into the Mid-West series sometimes or at other events and organizations. But seeing Pro Stock and seeing them up close and personal with those guys, it was so cool. To stand on the starting line and watch them race was amazing. That was the class that did it for me, and that’s for personal reasons. I’ve always wanted to announce those guys.

LOGAN: I’m a huge Pro Stock fan, so I love all that stuff. But that Import car that went down the track at like 5,000 mph, I was like, ‘Whoa, that thing is amazing.’

But just the Pro Stock competition and being in a more intimate setting, it was cool to see the fans get the chance to get more up close and personal with the drivers and teams than they would at a national event. 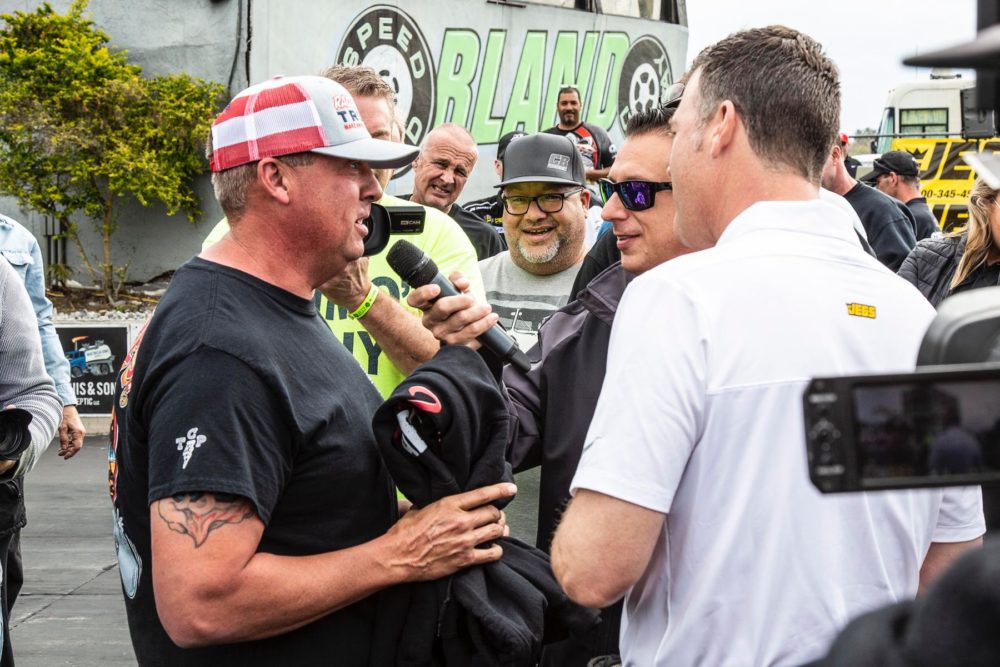 What are you most looking forward to at this year’s event?

CASTELLO: Building upon tradition is very important to me. There are so many things in our life that are here and gone, one and done, a good time but never to be heard from again. I really think it’s important to have continuity, to grow. To be able to be out there and be part of something that’s new, fresh and exciting, but also reinforces everything that I’ve worked hard to be a part of with the National Hot Rod Association, it’s a win-win situation. I’m just excited to light these cars, see some racing and get 2021 underway.

TUCCI: I’m just looking forward to seeing new names win. I was watching the Daytona 500 a couple weeks ago. I didn’t want to see [Denny] Hamlin win again. I just want to see new things happen. All that does is make the sport grow and make it better, when new names come in or an older name comes back and wins. I want to see something like that. I want to see someone mix it up. I love Erica Enders and would love to see her win that deal, but also there has to be some young guns that are coming into the deal that will be tough too.

LOGAN: I’m looking forward to just seeing everybody again. When I talked to Courtney [Enders] and Joe Castello, I was like, “Sure, I miss the racing and all that, but what I really miss are the people.” Not being out there last year was tough. I was driving to Gainesville [last March] and they said, “Turn around, we’re not having the [Gatornationals].” That was a week after the Doorslammers. I didn’t get a chance to see the PR people, the drivers, the crew guys again until I stopped in for half a day at the Gatornationals when the race was moved to September. That’s what I’m most looking forward to, seeing everybody and reconnecting.

Some new classes have been added to the mix – Factory Shootout, Comp Eliminator, Stock/Super Stock and some import shootouts. Is there one of the new classes that you’ll have your eyes on?

CASTELLO: Factory Stock Showdown, for me, is one of the greatest new innovations in our drag racing community, regardless of sanction. To see real cars at 3,500 lbs with superchargers, running to the max, it’s exactly what everyone has always wanted. To see that class adopted in as many places as is possible is encouraging. We need more teams and more drivers so that this relatively new category can continue to flourish.

TUCCI: Stock and Super Stock. Because of the muscle car look. Besides having stickers on them, most of the cars look like something you could drive down the street. That should be a cool deal. Anything new that’s added on top of what happened last year can only make it better.

LOGAN: I’m always interested in Comp Eliminator. I find that class to be entertaining. 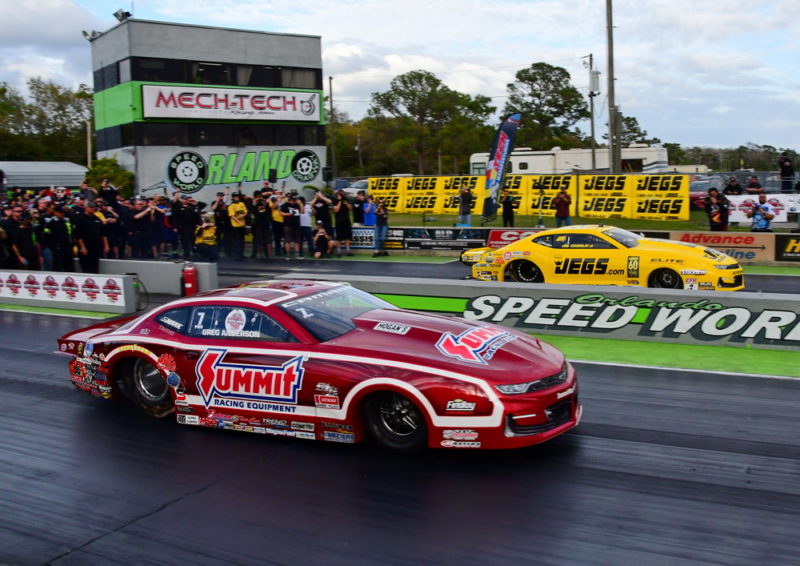 This race combines the polished world of Pro Stock and legal Pro Mod racing with the look and feel of an outlaw race. How do you approach announcing [or in Logan’s case, DJing] an event like this?

CASTELLO: I trust my gut. I’m all about the fun and entertainment of the moment. With my background in Miami, the entertainment industry is very strong. There’s a lot of competition. Whatever was good last year is not good enough this year. So to bring in added elements like Jason Logan as DJ, with popular music on the starting line, inspiring racers and race fans to enjoy every moment, even in between the high-horsepower action, I think that is an energy that feeds upon itself. If I have fun, the people that are hearing me will have fun. The people will walk out of there knowing that they had a great experience.

TUCCI: For me, it’s off the chain. If you’re eating Grey Poupon or French’s mustard, I’m bringing it. I don’t care who you are, what you are, I’m going to get charged up. My energy level changes just because of the drag racing. I have 12 years [of experience] in that tower in Orlando and I used to bring them to their feet over there. I’m getting to come back to a place I haven’t been to in so long. Pro Stock will be there. Pro Mod will be there. Sportsman racing will be there. It’s a dream come true and I’ll do the best I can do.

LOGAN: Last year, Wes said he didn’t want the regular classic rock. He wanted fun music. I said done, we’ll make that happen. It’s going to be a lot of new stuff, a lot of old stuff, some remixes possibly. We’ll throw some country in there for everybody from Oklahoma and Texas. It’s kind of wide open. We can play whatever we want. It was well-received last year. I was playing Pitbull out there and I was like, “I’m not sure if all these people like Pitbull” but it got people moving. I think adding that element, people are just excited that there’s music out there and they’re able to have fun. I think any type of music is fair game for this crowd. Hey, who knows, we might throw in a ’90s boy band set. Music takes you back to where you were when you first heard the song. It brings out nostalgia. That’s why I think having a good mix of music at these events makes them better. 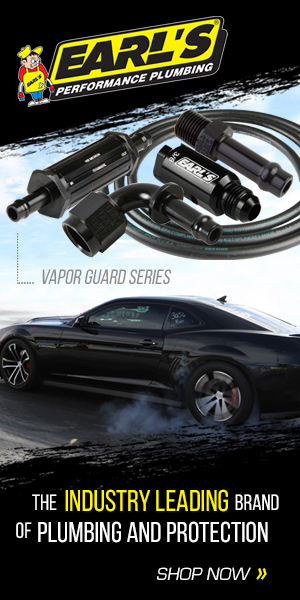