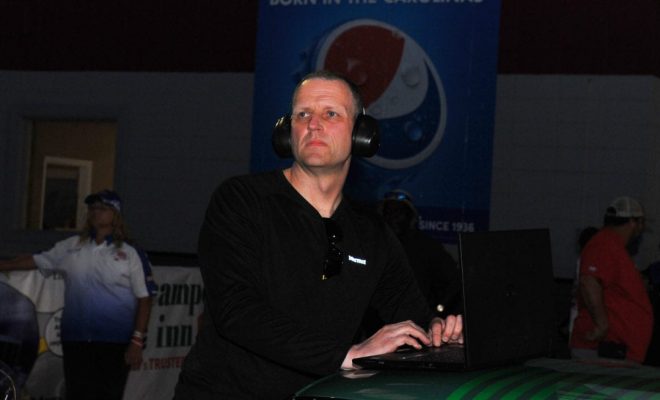 DI ROUNDTABLE: Billes and Barnett on the Balance Between Performance and Safety

The ultimate goal in drag racing is to win and to do that, pushing the envelope as far as performance is not just necessary; it’s usually required. But in making advancements – and sometimes at a rapid rate – those associated with the sport know that safety must not be left behind.

DRAG ILLUSTRATED spoke with drag radial standout Lyle Barnett, who is currently thriving while driving Jason Digby’s Dodge Dart, and Al Billes (pictured above), a former standout Pro Mod driver who is now a crew chief and tuner to top names in the class, about the balance of performance and safety.

In this discussion, each took a different angle when it comes to safety and performance. After his own harrowing crash and fire at No Mercy in 2015, Barnett talked about the importance of trying to be as safe as possible when it comes to the driver’s own protective gear. He stressed how vital it is for drivers to hold themselves accountable, while Billes also focused on the driver. His viewpoint, however, was more on the actual aspect of driving and how critical it is for the driver to be in tune with everything going on in the car and during the run. Both talked about the importance of safety, making sure it stays on a parallel course with performance and the aspects that go into ensuring it happens.

When you hear about performance and safety, what is your ideal balance as you try to push forward in terms of performance but also make sure there is still a strong concentration on safety?

LB: I’m now a firm believer in the belief that there’s no such thing as too much (safety). I started bracket racing when I was 15 years old and I still wore a full one-piece suit, driving shoes and driving gloves, and a full-face helmet. I consider that the minimum now. At the time, my dad put me in what I should have been in and maybe a little more. I have a whole new respect for safety after what happened and what I went through. 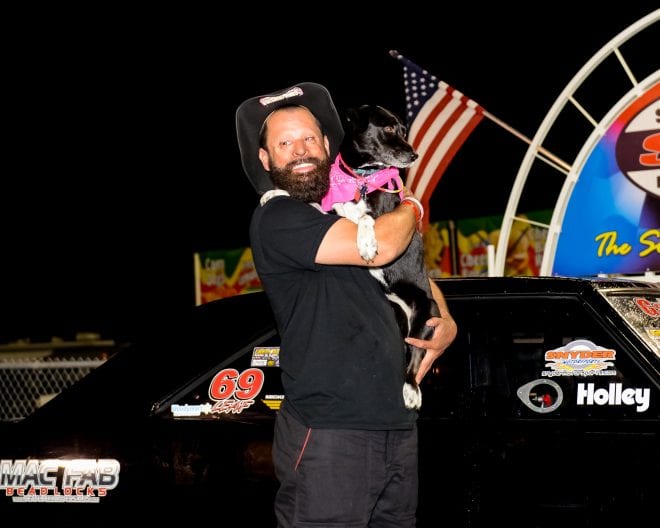 Doing a little bracket racing now when I’m not in Jason Digby’s car, I’ll still wear my (SFI)-20 jacket and pants, and my gloves. I still probably go a little overboard according to some, but as far as the balance, I don’t care what you’re driving; if you’re in something that’s considered a race car and something crazy happens or you’re on fire, in my opinion, no matter what you’re driving there’s no such thing as too much (safety).

As far as the heads-up drivers go, you’re an idiot if you think it’s okay to get in one of those cars with anything better than (SFI) 5 on. You’re a glutton for punishment and there’s just no sense for it. I know what it costs to build one of those cars and if you can afford to compete at that level, you can afford a firesuit that’s a (SFI)-15 or a 20. You think you’ll have enough on until it happens to you and then you won’t think that anymore, I can promise you that.

AB: A lot of cases, I totally separate both of them, in the sense that anything that is safety-related can’t be touched as far performance modifications. Safety is first. A lot of the driver cockpit stuff, I think it needs to be even enhanced more. You look at what they do in NASCAR, I think more driver protection is even better. The stuff is working quite well now. You see some of the violent wrecks and the guys aren’t beat up too bad, but more cannot hurt.

Cars go fast – you see a lot of guys driving them more aggressive because the class is tougher. You can’t just run down the track and put a number on the board, and then you’re qualified for the weekend. Every run you’ve got to be on it, so the guys are trying harder. Performance-wise, I look at the driver’s cockpit and there’s not a whole lot I would modify there for performance.

The performance of the cars in these classes continues to improve at an incredible rate. How do you get the safety measures to keep up?

LB: I think (SFI) 25.5 (firesuit) should be a minimum. I think a Funny Car hoop is a definite. A fire suppression system, that is a no-brainer. The purpose of a firewall is to keep you separated from the engine compartment in case of a fire. We drill holes, you’ve got piping coming through and we all run our wires through there. You need to seal that stuff up. That was a big fault in our part as far as my crash. Steven Fereday at Georgia, he had a pretty nasty fire and fortunately he didn’t get hurt, but he said that while he was in there trying to get stopped it was very visible where his weak points were because that’s where the fire comes.

As far as the way things are progressing now, when I started running X275, it was a high 5.00s-low 5.10s class and now they’re running 4.30s, which is absurd. Eight years ago, we were running 5.00s and then the next year we were 4.90s and 4.80s, and the class left me. It’s just crazy how fast the class has taken off. Radial vs. the World is some of the most outrageous progression I’ve seen. I remember thinking there’s no way they’re going in the 3s and now we’re knocking on 3.60s. Unless you’re on top of that or building a new car every couple years, there’s no way you can keep up with your chassis and car safety as fast as the car progresses. It would be really hard without a big-time budget to keep up progression-wise. The cars can go fast and not be safe, but in order to keep those two together it would be tough (financially). I think my crash definitely opened a lot of eyes. They’re fairly safe, but I think it would be tough to keep up.

AB: Most of the stuff doesn’t really involve safety, save for modifying supercharger components or engine stuff. I guess inherently you’re saying you don’t want to modify a part and it break. But at the end of the day you just don’t want it to break regardless because of the expense aspect of it, so they kind of mix together. As soon as you talk safety and performance together, it’s difficult.

Drag racing has always been home to forward-thinking individuals when it comes to car performance. Do you feel like that aspect is in a good place while still maintaining a focus on safety?

AB: I think that it’s not bad right now. I think one of the biggest things to move safety ahead is driver training. I don’t know how you control that or manage that, though, but that’s huge. At the PDRA race (at Darlington) I watched guys drive across the centerline into the next lane, and it’s like, ‘What on Earth are you guys doing? That wasn’t a sudden move.’ I think of the slow improvements with the guys with traction are making and all the head protection and all the body stuff, I think that stuff needs to evolve a little bit. But I think there’s just a whole aspect of the mentality of the racer. I watched one guy leave the starting line in the left lane and he drives across, slowly, slowly and then he’s three feet from the centerline, where you’re really out of the groove, and the car made a sharp turn into the right lane. He was fortunate that nobody was beside him. 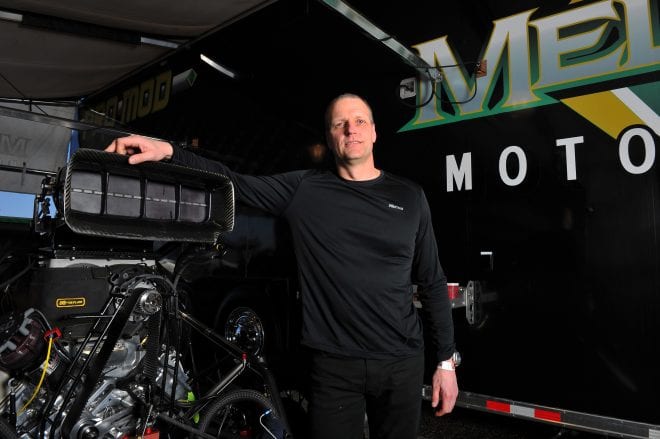 To me that seems to be the biggest and hardest thing to get at. How many races do you watch and wonder why on Earth did that guy not lift? It’s a tough call when you’re in the car because so often it feels fine, feels fine, feels fine and all of a sudden you’re turned into the wall. That, I think, is simply the biggest area; somehow teach the drivers and change the mentality of when to and when not to lift. You’ll see a lot of drivers that just don’t get in trouble and they’re off the throttle quick enough, where the other guy is repeatedly in trouble.

Where does the onus lie in making sure safety keeps up with performance, especially when it’s coming at such a dramatic pace in the drag radial world?

Ultimately, what’s the key to continuing to advance performance without throwing caution to the wind with safety?

LB: The biggest thing is you have to self-police. I get the pleasure of driving Jason Digby’s car and we’ve done really well. I wear big nitro boots, a headsock, big (SFI) 20 gloves, (SFI) 20 suit. But at some point, these guys aren’t out there to hold your hand. At some point, you’ve got to be a big boy and take it upon yourself and realize you’ve got to wear what you need to be racing. A lot of these guys have wives and kids, and at some point you have to realize you have to make sure to go home to them. At some point, you just have to quit skimping by and stop bouncing around in the gray area and do it yourself. 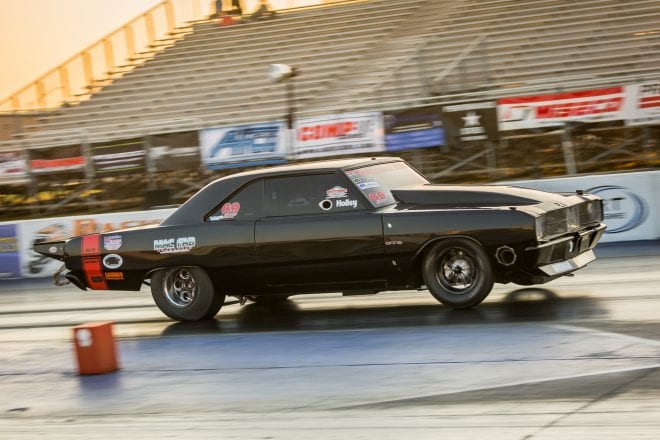 AB: Just in tuning the cars, one of the biggest things I work on in terms of being safe, is spending a lot of time with the driver. Some listen, some don’t. Some learn, some don’t, but at the end of the day you’re not out there to do anything for me. That thing shakes or does anything, or gets out of the groove, you need to get off the throttle and bring the car back. Don’t go out there being a hero because once or twice that will be fine, but the odds are it will be a poor return on that investment. We talk about that quite a bit. I try to make sure that the guys I help are clear that you need to lift. Some don’t. A lot of them, you get through to them eventually and they change slowly. But that’s really important to me. I’m not driving because I’ve gotten in a couple wrecks, but they do happen and I always try to be careful in the car. Parts failures are parts failures, but at the end of the day I don’t want anyone that I’m tuning to get hurt.

Josh Hachat
← Previous Story WHITE HOT: From Outlaw 10.5 to Pro Mod, Steve Summers Steps it Up
Next Story → CLOSE UP: Morgan Miles is Climbing the Ranks