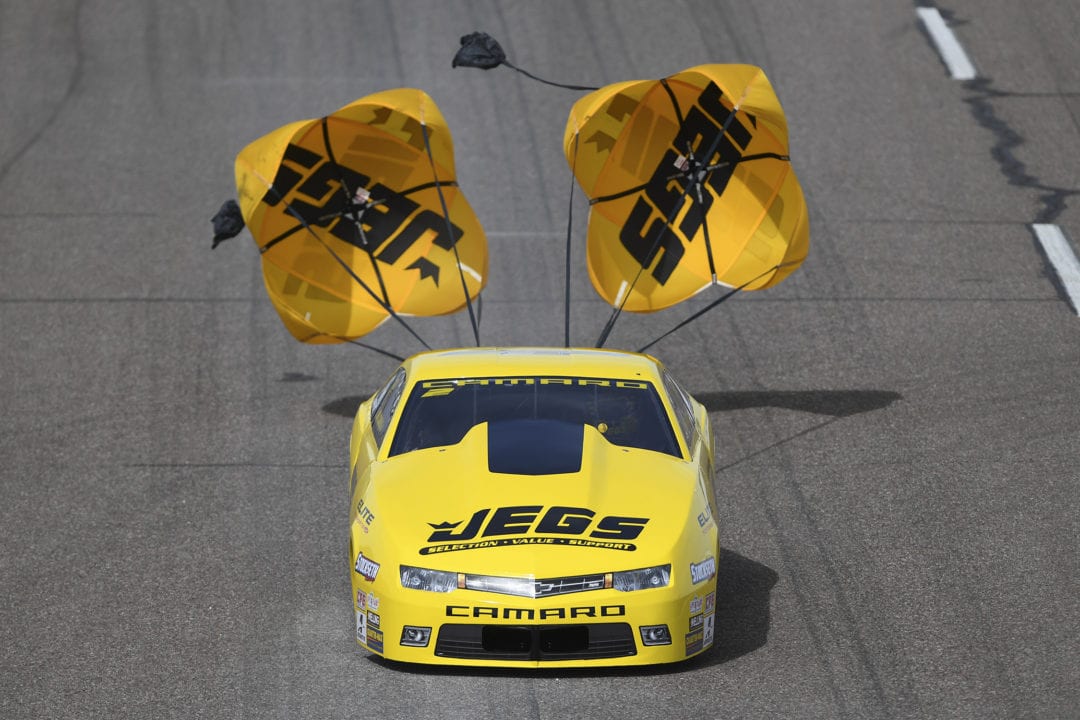 It was quite the weekend for Jeg Coughlin Jr. The veteran Pro Stock standout competed in his 1,000th round of racing and faced longtime rival Greg Anderson for the 100th time in eliminations, but the most important number was one, as in Coughlin earning his first win of 2019.

It happened in Coughlin’s 1,000th Pro Stock round, as he picked up his 62nd career victory by beating red-lighting Matt Hartford in the final round with a 6.557 at 210.67 mph.

It gave the always-eloquent Coughlin a chance to reflect on a magnificent career that has included five championships. A sixth is a long way off with only two races down in 2019, but Coughlin, who finished second a year ago, continues to prove he hasn’t slipped one bit.

“This win today truly feels really second-to-none,” Coughlin said. “To reach a mark like this – 1,000 rounds of racing in this class – and to hit it just right with a win, wow, that’s just incredible.

“It’s a lot of racing. I’ve been racing Pro Stock for more than 20 years and to reach this mile marker is amazing. I’ve got to thank my family and all the crew members and teams I’ve had behind me through the years. I’ve had some amazing talent helping me get here, from mechanics and engineers working on the car, to the various crew chiefs and engine builders, the list goes on and on.”

The list these days includes a powerful Elite Motorsports team that includes Erica Enders, who fell to Coughlin the semifinals, Rodger Brogdon, Alex Laughlin and Hartford, who leases engines from the company.

The pairing has brought out the best in Coughlin, who opened eliminations on Sunday by beating Greg Anderson in their 100th meeting on raceday. The rest of the day included Elite-on-Elite crime as Coughlin beat Laughlin, Enders and Hartford to finish the day, but the prospects look good for another big year for Coughlin.

He has continually held himself to high standards and that has helped raise the bar of everyone around him. That includes Pro Stock, which had another strong field in Phoenix, as a whole, as well as teammates and the teams he’s been on over the years. But by pushing himself year after year, it’s done through the lens of enjoyment and appreciation, two factors that remain apparent 1,000 rounds later.

“This is really a testament to this Elite team and all the other teams we’ve had over the years,” Coughlin said. “I remind myself every time I get in the car to just get in there and do what I love to do and that’s race this car. That’s a cliché saying from the Days of Thunder movie, as someone pointed out to me years ago, but it’s still a damn good point. I’m honored to be here, doing what I love.”

HAGAN PUTS TOGETHER DOMINANT WEEKEND: It was fitting that Matt Hagan won in Funny Car at Phoenix. After all, he was the only car that put together a good run in odd – and that’s probably putting it nicely – conditions on Friday and never let up.

Hagan was consistent and quick, wrapping up eliminations by beating defending world champion J.R. Todd in the final round with a 3.890 at 326.06. He noted that 2019 is a new year and he’s coming for a third world championship and this weekend was Hagan and crew chief Dickie Venables at their best.

Venables had the car dialed in, as Hagan went 3.919, 3.894, 3.921 and 3.890 in eliminations, tremendous numbers for a tricky that proved tricky for a number of top competitors. That wasn’t the case for Hagan and he moved to second in points behind only Robert Hight in a loaded Funny Car class.

“For us, this win is huge with the new Hellcat body,” Hagan said. “Hats off to Dickie Venables (crew chief). He won the race. He had a race car underneath me that was just going down the track every lap. We were able to put on a great show for our fans.”

NO SHOCK HERE – A TORRENCE WINS IN TOP FUEL: Yes, a Torrence won and yes, there’s a Torrence atop the points standings. But it’s the elder Torrence wreaking havoc in Top Fuel, as Billy Torrence obliterated everything in his path this weekend in Phoenix, grabbing his second career win.

Like his first victory, which came last summer in Brainerd, Torrence qualified No. 1 and crushed his way through four rounds on Sunday, capped off by his 3.965 at 326.40 against Leah Pritchett in the final round. Torrence went as quick as 3.687 at 329.58 in eliminations, while he qualified No. 1 with a sterling 3.667.

He was strong in Pomona, while the win in Phoenix gave Torrence the points lead for the first time in his career. It’s an impressive feat for the part-time racer, who may rethink that status if this keeps up. It’s also another feather in the cap – or cowboy hat – of the Torrence Racing team, which now has eight wins in the last 10 races. Six of those have come from defending world champion Steve, but father is showing he has plenty of tricks left as well.

“It’s just a blessing to be out here,” B. Torrence stated. “I’m trying not to choke up. The car ran great and they all worked so hard to keep a good car under me. Even Steve’s (Torrence) team came over to help them out and it was just outstanding.”

JOHNSON GOES DOUBLE-BOOM: This was not the way Tommy Johnson Jr. wanted to celebrate 30 years of nitro racing. Johnson made his nitro debut in Top Fuel at Phoenix 30 years ago last weekend, returning in 2019 as a Funny Car title contender. This weekend, though, only showed the fiery personality of racing in the nitro ranks, as Johnson went boom during both the first and second round. He got a win in the first round as Jim Campbell crushed the timing block, but despite a furious attempt to get Johnson back for the second round, the car had another nasty explosion. .

IMPRESSIVE ROOKIES
Austin Prock made his debut in Pomona, knocking off teammate and 2017 world champ Brittany Force. Last weekend, we saw another impressive debut as Jordan Vandergriff qualified fourth and raced his way to the semifinals, posting a strong 3.692 at 333.41 in a first-round win against Force. This is shaping up to be an outstanding rookie of the year race, and it’s a group that goes even deeper than these two young standouts. But watching Vandergriff perform in Phoenix was a definite highlight of the weekend.

Nice job, rookie!@JTVandergriff made his first official pass in a Top Fuel dragster Saturday at the @MagicDryUS #ArizonaNats!

He heads into race day qualified fourth and will take on Brittany Force in Round 1. #NHRAonFOX starts tomorrow at 6p ET on @FS1. pic.twitter.com/2Mt9zruWAe

THAT GATOR HAS TEETH: Another race, another career-best for Terry McMillen, who ripped off a strong 3.695 at 330 mph during qualifying in Phoenix, nearly posting his first career No. 1 qualifier.

DRAG ILLUSTRATED LIVE
Make sure you check out the latest episode of DI Live with Wes Buck! He talks to Lights Out RvW winner Alex Laughlin and hits all the hot topics in drag racing.

SHAKEN: Well, that can is exploding everywhere when it’s opened. But, as the kids would say, #worthit.

Billy got it done!

WE MISS HER, TOO
It seems as though John isn’t loving life without Courtney in the Funny Car ranks with him. At least that’s what we’re reading into this otherwise hilarious tweet.

I think my dad might miss me a little bit. ☺️ After yesterday’s race he was hanging out in the race trailer watching my @AdvanceAuto commercial on TV 💛 #MissYouTooDad Video Cred: @BrittanyForce #AdvanceXForce @JohnForce_FC pic.twitter.com/VoBWWhixdu

DI GETS SOME LOVE
Watch how Drag Illustrated started with this awesome video on DI Founder Wes Buck from KTVO!

TOP FUEL DRIFTING
Austin Prock went on a wild ride, but the Top Fuel rookie handled it like a veteran!

A RAINY START
We got some cool shots from it – including this killer one from Mark Rebilas – but nobody was a fan of the rain that came on Friday.

You typically don’t find me standing in a puddle of water in 47 degree temps but when there is a beautiful rain puddle in the middle of the road on the way to the staging lanes I just couldn’t help myself but to stand there for like ten minutes shooting every car that towed past. In this shot, the car of NHRA funny car driver Blake Alexander reflects as its towed past during qualifying for the Arizona Nationals at Wild Horse Pass Motorsports Park. My wet socks the rest of the day wasn’t quite as fun… 🤦🏻♂️

FINAL WORD
Talk about an awesome start to 2019. We had Pomona, Lights Out and now Phoenix in February, all of which delivered in a major way. From afar, it appeared that Lights Out 10 seemed like one of the best renditions of the annual radial racing Super Bowl. We get a quick breath, but March is going to be epic with the Sweet 16 race and the 50th anniversary of the Gatornationals, plus much more. Welcome to 2019 everyone!