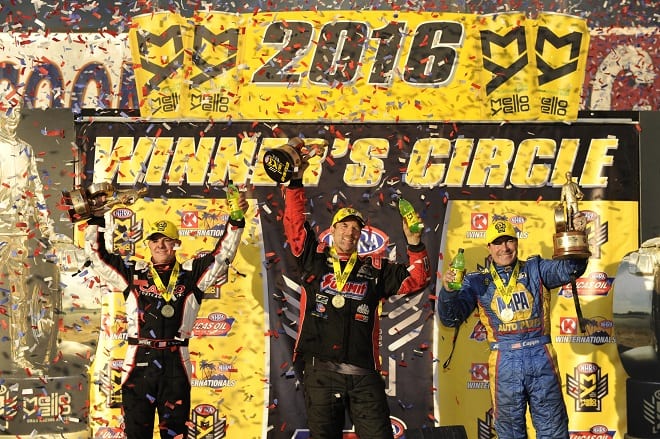 Another 87-day NHRA offseason has come and gone, and the first Wallys of the year have already been presented to the winners of the 56th annual Circle K NHRA Winternationals, the first of 24 races of the 2016 NHRA Mello Yello Drag Racing Series season. The new season comes with a variety of fresh looks – a glitzy new television package, a sweeping set of rule changes for the Pro Stock class and a few new driver/sponsor/team combinations. There was plenty of familiarity too, though, as some of the sport’s greats and defending world champions once again proved their mettle.

The smoke has cleared, trophies have been handed out, and the teams are already looking ahead to the next race in Phoenix at the end of the month. It’s time to recap some of the best and worst moments from the Winternationals.

With all of the rule changes introduced to the factory hot rod class over the last six months, no one really knew what to expect when the Pro Stockers kicked off their first official event with flat hoods, electronic fuel injection and shorter wheelie bars. Some of the best of the best, champions like Allen Johnson and Erica Enders-Stevens, seemed to hit a couple roadblocks with the new set-up. The KB Racing entries of Greg Anderson, Jason Line and Bo Butner made the transition look easy, as the teammates qualified one, two and three, respectively. All three drivers raced into the semifinals too, and Anderson won the all-Summit final round on a holeshot.

Scariest Moment of the Event: Gary Densham’s Trip to the Beach

Retired school teacher Gary Densham made the highlight reel with his career-best 4.05 elapsed time in the fourth and final Funny Car qualifying session, but not for the reason Densham or any of his supporters would have wanted. The 69-year old Funny Car veteran’s parachutes failed to deploy as he streaked down the short Pomona shutdown area. He sailed across the pea gravel trap and ended up in the catch net, damaging his car to the extent that Densham hinted that it might be the end of his driving career. Fortunately, he walked away from the high-speed impact without injury.

Even though a low 3.9-seocond blast is practically the norm in Funny Car at this point, it’s still absolutely incredible what kind of numbers the fuel coupes are producing. Last year’s championship runner-up, Jack Beckman, led the qualifying field with his 3.888 and was followed by nine different drivers in the 3.9-second range. It took a 3.9 et to win at least half of the pairings in all four rounds of elimination. Ron Capps and Robert Hight provided a tight race with their 3.938-to-3.949 semifinal pairing. In the final round, Capps and defending world champion Del Worsham emphasized the quick, yet extremely close, competition in Funny Car, as Capps stole the Winternationals Wally in a 3.981-to-3.962 race that was decided by just 0.0008, or about 5 inches.

Defending Top Alcohol Funny Car world champion Jonnie Lindberg did an excellent job of proving why he carries the #1 on his new Camaro body. The Swedish young gun battled with number two points finisher John Lombardo Jr. throughout qualifying, eventually ending up with low et of qualifying at 5.421 seconds. It was the John and Jonnie show again in the final round, where Lindberg used a 5.423 at almost 272 mph to defend his 2015 Winternationals title, defeating Lombardo and his 5.456 at 272.83 mph lap. Lindberg, who is in charge of both tuning his racecar and getting it to the track, fell out of the 5.4-second zone once when he shook in the semifinals, but a timely red light by opponent Mike Doushgounian saved the 26-year old’s day.

Most Impressive Performance in the MPH Department: Don St. Arnaud

Canadian Top Alcohol Dragster pilot Don St. Arnaud has made a name for himself as the fastest A/Fuel dragster in history over the last few years. Though he doesn’t run as many races as the class regulars, St. Arnaud leaves a lasting impression whenever he does hit the track, and this weekend was no exception. He claimed low elapsed time and top speed of the event in his qualifying effort (5.181/285.05), which also allowed him to reset his own national speed record. St. Arnaud continued his assault on the record books in eliminations, speeding into the mid-280s on three of four runs. He leaves Pomona with eight of the 10 fastest runs in class history.

Dan Fletcher would go down in history as one of the most successful drag racers of all time if he parked his operation today, but the professional Sportsman racer is far from finished. At 94 national event wins, Fletcher is on the verge of the milestone 100 wins and he came awfully close to adding two to his total this weekend. He lasted through seven rounds to take home the Stock title and came close to scoring his second double-up when he lost in the Comp Eliminator final round. Considering his season-opening performance and his packed schedule, it’s safe to say we’ll see Fletcher celebrating win number 100 very soon.

As one of the best blown alcohol dragster drivers in the country, it’s hard to call Shawn Cowie the underdog, but Don St. Arnaud had him covered by more than a tenth of a second in qualifying and each prior round of elimination before the two faced off in the final. Crew chief Bill Moore tuned it up for the final and St. Arnaud made his slowest run of the day, allowing Cowie to run away with the 2016 Winternationals Wally.