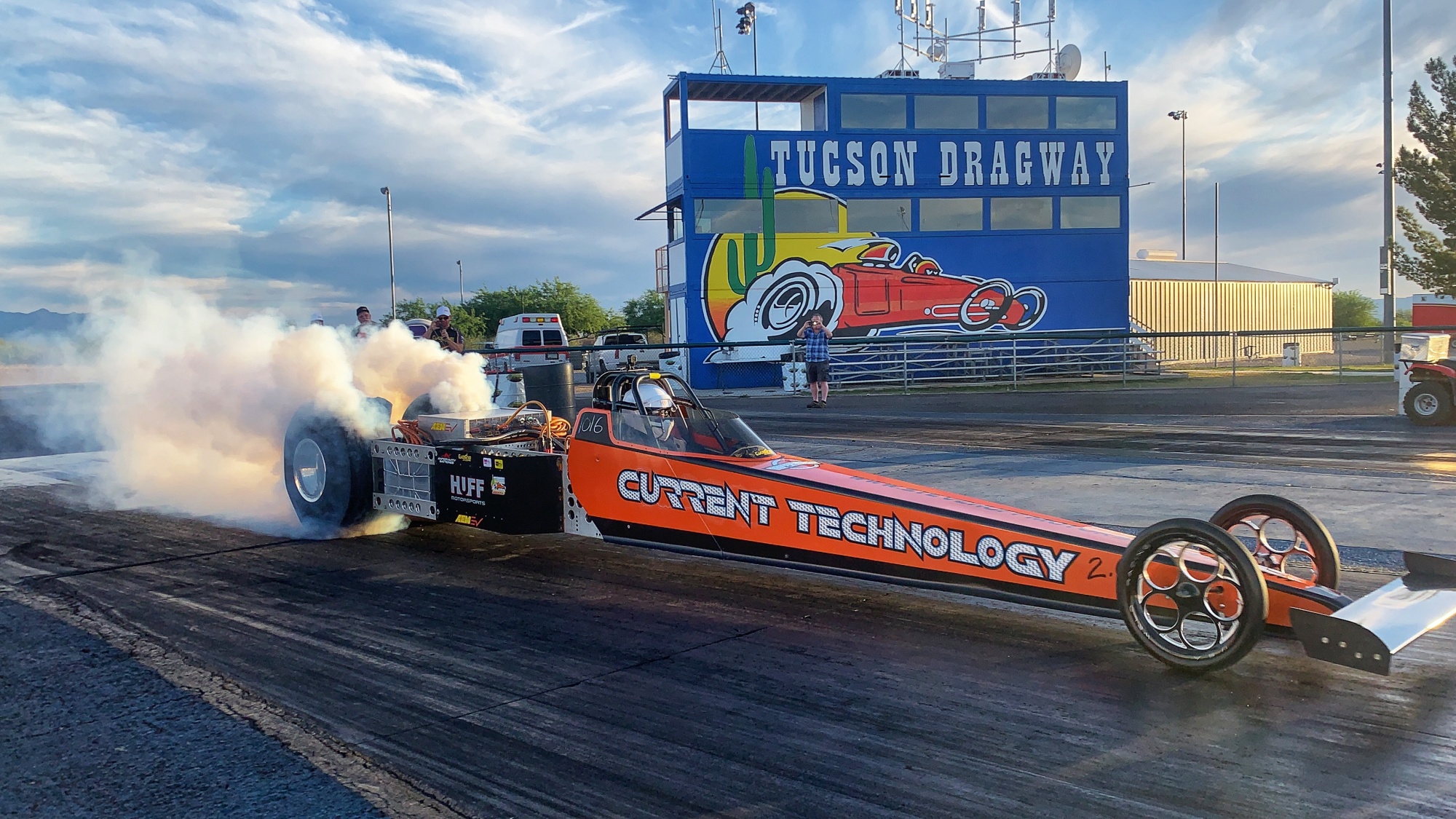 If there’s a conventional route to running an electric dragster, Steve Huff surely didn’t take it.

With a punk rock attitude, incredible intelligence and a penchant for taking on virtually any challenge, Huff has thrived in his myriad of racing endeavors.

The latest, though, may be his greatest. On a Wednesday night in May – as the drag racing world was mostly silent due to the COVID-19 pandemic – Huff went to Tucson Dragway with his electric dragster, hopeful he could make history.

As the clock approached midnight on May 13, Huff unleashed a historic pass of 7.520-seconds at 201.07 mph in his electric dragster, becoming the first racer to go 200 mph in an electric car. The Seattle native did it before the legendary Don Garlits, backed it up two nights later and has since reveled in an accomplishment that still barely seems possible.

“This is at the top of everything I’ve done,” says Huff, who owns a motorcycle repair shop in the Seattle area. “In today’s world, and with the competitor like Garlits, he was the 900-pound gorilla in this fight. But if I haven’t done it, I’m down to try it.”

Huff’s long, winding road in racing includes testing for an IndyCar team, setting records in the All Harley Drag Racing Association, enjoying massive success racing hydroplanes in the Pacific Northwest and setting land-speed records at Bonneville, always furthering the sport with an inventive mind and a deep dedication to the math and science of it all.

He talked with Drag Illustrated about the journey, the emotional scene that followed and what’s next.

It’s quite a road you’ve been on. How does one go from owning a motorcycle repair shop to making history in an electric dragster?

I’ve never looked for easy challenges. Let’s pick the hardest one in the book. Let’s find something challenging. It’s the process and if you do the process right, the results will be tremendous. Between the math, the science, the physics, the art of it is beautiful, and then you go do it.

The electric thing just kind of inspired me to try to do something new. Not because I get bored easily. Everything has been a challenge. You want to ride a Top Fuel bike and go six seconds at over 200 miles an hour? Trust me, it’s going to be a challenge and, once you do it, you’re like, “Well. Now what?” And that’s it.

The scene after you set the record was so surreal and seeing your emotions just added to how special it all was. What stands out about that night in Tucson?

The timing was right. I waited until May 11 to see what the governor in California would say. And then they said, “No, we’re not lifting anything.” So I called up [Tucson Dragway track operator] Jim Hughes and said, “Jim, I need your track.” He said, “No sweat. Come on out.” It was always a great surface.

I had to get it done. I just had to get the 200 out of the way. We’ll go faster, but I had to do it. Nobody was waiting for me and I sure as hell wasn’t going to wait to give anybody else any chances. And then we saw an opportunity as well, with the lack of motorsports news. We thought, “If we do it now, it’s the only thing that’s newsworthy.”

We went there, on our first day out, and only made it to half-track. I made a 330-foot pass, and then I made an eighth-mile pass and I failed the fourth time. We made another hit, I pedaled it, but it just wasn’t there and I ran 185 (mph) or something.

I looked at the data and we’re going 188 at the 1000-foot. I told the team, I said, “But here’s our data. I think we can get Garlits. He’s at 189. I think we can get 192 to 195 out of it. I need to get back to the drawing board.” And the team agreed. I tucked the ‘chutes back up, we charged the batteries, and we went back out at midnight on that last one. I made the hit and I just stayed in it. I heard screaming in my radio and I heard “two-something” and I radioed back and said, “What?” And again, two-something and that was it. I knew it.

I thought it was the most incredible thing. And when that comes at closing time, instantly you just start looking back at the journey. It was surreal.

With the way your mind works, it’s already processing the next thing. So what’s next up on the list?

We’re going out to being the first in the 6.00s and I have the utmost confidence that it’ll happen. Without question, since the drive home I’ve been thinking about how to build a clutch for this car. Everything I’ve built is open-source. Nothing is a secret on this car. If someone asks me about this car, I’ll give them an honest answer and, in fact, I’ll teach them how to beat me. We’re very competitive and it’s a hell of a lot of fun. I’ve been back here trying to figure out the clutch so we can go ahead and go faster.

Well, you’ve certainly received a lot of notoriety with this and the reaction to this has been tremendous. What’s one thing you hope to gain from this historic mark?

I’ve been developing a television show for the last seven years. Again, I’m going to go back to education. It’s critical for me. My television show is called Speed Geeks, The Science of Speed. This is MythBusters goes to the racetrack. This is a show that will explain math, science and physics, and we do that with different vehicles. And currently, as of today, we’re in talks with Adam Carolla and Nate Adams of Chassy [Media], because they have expressed that they want to be the production entity for the show.