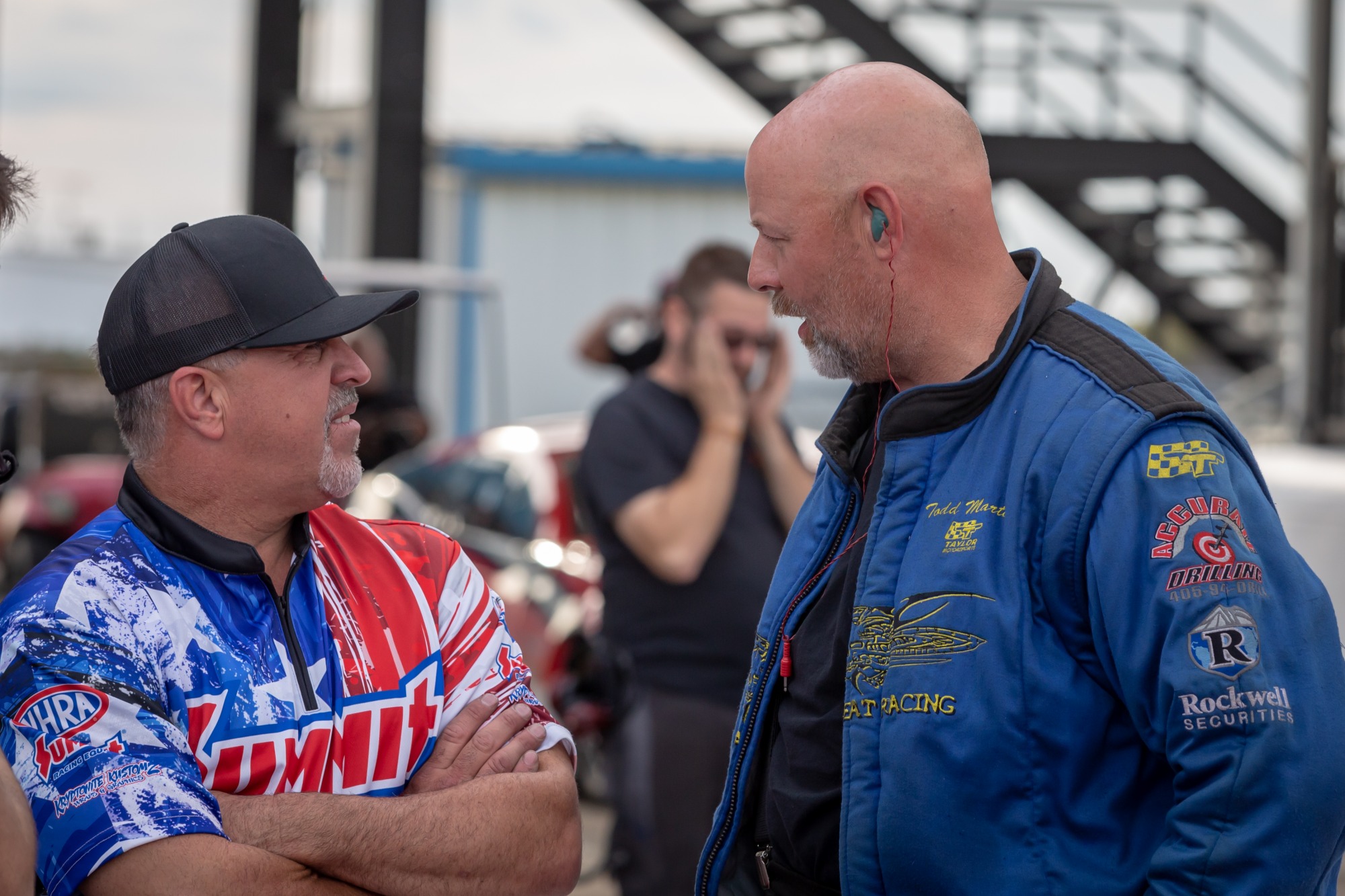 When Osage Casino Tulsa Raceway Park announced it would not only host its popular Throwdown in T-Town race, but also allow spectators, it made national news. Tulsa news reporters were on hand as thousands of fans rolled through the gates for the first major spectator sporting event since the COVID-19 pandemic forced the country to effectively close up for two months.

Tulsa Raceway Park co-owners Keith Haney and Todd Martin (pictured above, right, with Haney) were two of the driving forces behind the track reopening and holding what is typically their largest spectator event of the season. The two area businessmen worked together with local government officials to make sure the event could happen at all. Then, they worked with the track team and local law enforcement to make sure it happened in the most responsible way possible.

The race was a double win for Haney, whose Mid-West Pro Mod Series headlined the event. The series became the first touring organization to start racing again, a move that was met with support and praise from new teams and fans.

“Not only for Tulsa, but for the Mid-West Pro Mod Series as well, it was big,” Haney says. “To have a race and be able to start a points series, that was huge. For the marketing partners, those people that stuck with the Mid-West Pro Mod Series and Tulsa, you couldn’t believe how important it was, for Osage Casino being our naming rights sponsor of Tulsa, to Summit being the naming rights sponsor of the Mid-West series, and to each individual company that supports us.”

How did you and your team develop a plan to return to racing when things started to calm down?

Basically, Oklahoma wasn’t hit very hard with the pandemic, although there have been people who’ve had it and passed from it. Our governor, a very good governor, decided let’s get [the state] open, stage 1. We just happened to be in that phase 1 of reopening America.

At that time, we didn’t know if spectators would be allowed, so we just took the assumption that we would have the race without fans. Right before that, the mayor didn’t like some of the ideas but then said he would back the governor. With the dealerships that I own part of in this area, I ended up contacting our counsel there and they knew the people at the mayor’s office and the county. They made a phone call and clarified it for us, got it in writing almost that said that we could have spectators at Tulsa.

Then Todd went to work. He deals in the environment stuff now. He went to work on a reopening plan – a full breakdown, and pretty much every racetrack is using it now. Chris Blair at World Wide Technology Raceway in St. Louis was a big part of that as well. We put a plan together, posted it publicly, then ultimately we were lucky enough to have fans. We could have 50 percent occupancy and we chose to have 25 percent for the Throwdown at T-Town, which was the first major event that happened anywhere in the country.

We had three local news channels and CBS national there. They all talked about us, and all of it was good. We ultimately had a little over 12,000 fans. Our pay-per-view was good. Our racer turnout was spectacular and our race was great. We were just fortunate enough to be that track that just happened to be in the right area to open up.

You talk about the attention this race received. Did you feel a responsibility to run everything to the T as a positive example for how races could be run during the crisis?

Todd and I knew we were going to be scrutinized and watched, from NHRA, PDRA and other organizations. Mainly NHRA because we’re an NHRA track. We knew that although we wouldn’t be perfect, we knew we were setting the foundation for other tracks to open and felt like we did exactly that. The things that were put in place and what we enforced, anybody that watched it, saw that it was done exactly the way it was supposed to be done.

There seems to be a lot of attention, new cars and new fans surrounding the Mid-West Pro Mod Series, especially after being the first series to start racing again. How do you capitalize on that and continue to grow?