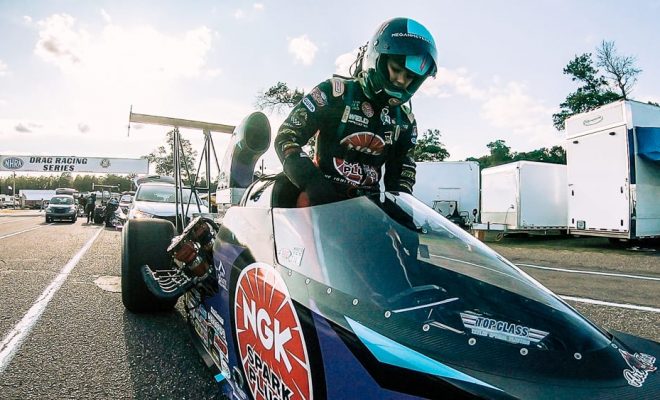 What’s worse than red-lighting in the final round against the guy you are battling with in national points?? I’ll wait till someone can come up with an idea.

It always HURTS to go red when racing, but you know you have to let it go or else it will haunt you forever. I was very upset, like to the point of where I wanted to give up and call it quits for the rest of the year once I saw that red bulb light up in Brainerd. But I quickly got over myself and as soon as I hopped out of the cockpit I was completely fine. I am happy for Shawn Cowie and his team for getting the win at the NHRA Lucas Oil Nationals, they earned it. My guys gave me a great set-up with the car going into the final round after we just ran low ET of the event, but I sucked and simply failed at my one job of cutting a good light. It’s not like I was extremely red – a -.015 reaction time is still good – but it was just too soon.

OH WELL, SHIT HAPPENS. ON TO THE NEXT ONE.

And that next one is the BIG one – the U.S. Nationals to be exact. Which Shawn is entered in too, along with 21 other dragsters including my sister Rachel, who has never raced at The Big Go before. I have to be on my A-Game this weekend, or else I can kiss the National Championship goodbye. It looks like we will have cool weather temperatures, so it should be a perfect setup for us to finally get that Indy Wally! We’ve been racing at the U.S. Nationals for years, like decades, and have never won the event. I came close in my first year making it to the final round but fell short to Josh Hart. Hopefully it will be Rachel and I together again in the finals!

Watch my latest Vlog below to see all the awesome GoPro footage on the car at Brainerd!

Megan and Julie compete together in the NHRA @lucasoilproducts #brainerdnats – watch for behind the scenes + on-car gopro footage!