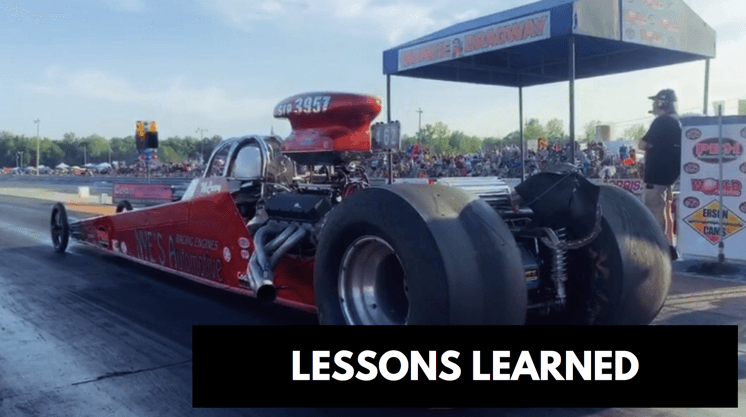 Picture this: you are in the lanes with your helmet and everything on. You put your dragster in second gear. You know you got this race without a doubt because you have been .00 all day and the car has been dead on every pass. You are ready. You just know you’re about to hit that .00 again and reward yourself with another Capri Sun after this race. Then you realize the car isn’t moving and your car is broke. You’re sad. You push your car back to the trailer still all amped up for that round. I mean you know the only way your adrenaline is going down is if you run a mile real quick. Then your dad loses that round in his dragster. Then you hear the track call a shootout race. You enter in the race without thinking if maybe you are not about to fit in your dad’s car that you have never raced before that goes 4.60s.

Yes, I am talking about me.

So yes, I was very upset that I could not finish that race in my car. I was still in racing mode to just load up and go home. That shootout race they called was 16 cars, $50 to enter, $400 to win. After I impulsively entered in it, I started to get the car ready for me to hop in the first round. I get in to adjust the belts and make sure everything feels right, then my foot just falls to the floor. I can’t even reach the pedals. So we kind of hurried up and put my poured seat in the car and thought we just solved the problem. Well, I was still too short. So then we put a pillow behind the poured seat, and finally I can touch the pedals. It was very uncomfortable, but it was doable. It felt like when you are trying to adjust your seat in your daily driver, and the seat comes up too far forward and you are just awkwardly leaning over too far. Yeah, it felt like that.

On a side note, as I was adjusting everything in the car at our pit, a woman and her family walk up to my car completely astonished. “Oh my god, YOU actually drive this car? You? A girl?” I mean, is it really that crazy that women race? I’m flattered that I just blew her mind, but it is just kind of crazy to me that people think that is so wild that girls can drive fast cars too. She kind of made a scene with her amazement, but it was the Night of Fire – who isn’t excited?

Back to my impulsive decision. It was time to roll up to the first round. I am in the lanes, so uncomfortable in the car, rethinking my life. The cool thing about it is that right when I turned that car on to roll up to the water box, I totally forgot I was in a different car. I have learned to adjust my focus really well, and I can get into later how I taught myself that. As I am pre-staging, I am hearing dad’s voice in the back of my head to lean as far back in the seat as I can before the car launches, because given all that padding behind me, there is a lot of travel from my head to the roll cage. You can even see in the video I hurried up and did that after I let go of the button.

So I did a thing yesterday.. my car broke before 3rd round yesterday (and I was in the mood to really crack em so I was very upsetti spaghetti.) Then there was a call for a shootout race, and without hesitation I go enter in it and told Dad I’m racing his car (a car I’ve never raced). So we guesstimated what that would run, we were pretty accurate and I did better in dad’s car than in my own?? That beast was a bit faster than mine and it was SO much fun (and I couldn’t really reach the pedals so idk how I managed to do that.) Unfortunately the right lane was oiled down after the night of fire and couldn’t finish the race, but idc i had a smile tatted on my face for how much fun that was. @unoh_edu @moserengineering @wisecopistoninc @nyesautomotive @buybacksrus

So I took off, and immediately I am completely stretched out so far that I had a charley horse all down my right leg going down the track. It launched so much harder in the seat than in my car. I was .010 whomping to take .004. Second round, I was .004 taking .010. I ended up going 4.64 at 149.80 mph. I would say that was pretty decent considering it was my first time driving that car. I was really thinking I was about to win this race, then a show car oiled down the right lane, splitting up the race. Which is fine, I tripled my entry money and had an amazing experience. Weird to say that I am kind of glad that my car broke third round? I probably would not have drove dad’s car if it weren’t for that.

So what is the lesson learned? Have some ice packs ready after you pull all the muscles in your body trying to reach the pedals. But seriously, though, I learned a lot about myself that day. I learned I really am not afraid of much, and that I can take on some pretty interesting challenges. I am still very proud of myself to this day that I did that. To some people that may seem like nothing, because people jump around between cars all the time. But this is my tiny accomplishment that I am pretty proud of.