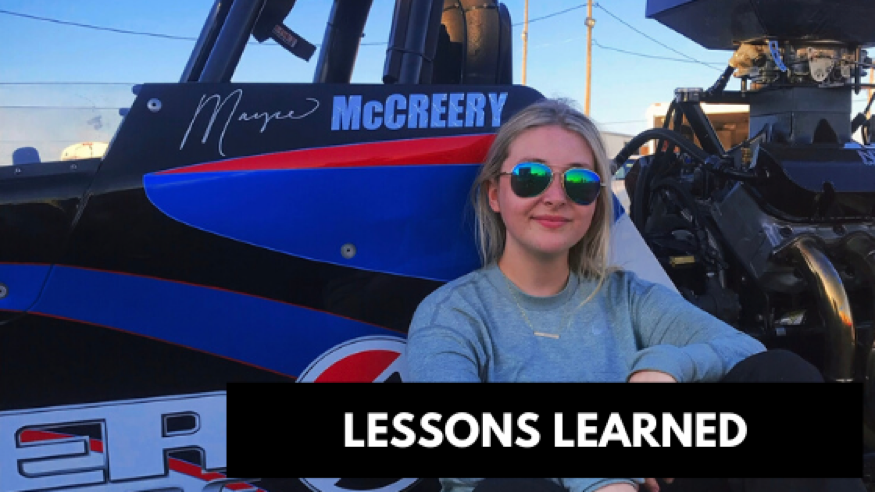 Honest racer to racer talk here. How many of you have been in a “second-round curse?” No matter how well you do, you just get stuck in this rut of not getting past the second round? I had this happen in Jr. Dragsters a couple times, and right now I am experiencing it in the big car. The few times I have gotten in this rut, I can’t get past the second round for about 8-10 races in a row. Hopefully other racers can relate because if not, this would be an embarrassing confession.

Getting stuck in this pattern of not getting anywhere on a raceday can be very frustrating and tolling on your confidence behind the car. I know I have talked about how I can pull up beside anyone in the lanes and always know I have the ability to win. But when you are putting your helmet on after losing 10 second rounds in a row, you tend to have that sitting on the back of your mind. I also tend to overthink and be hard on myself, so maybe that is just a Mayce thing.

Over the weekend I finally broke my curse, but for the three races I entered, I lost the third round in each race. It is frustrating because I am so freaking eager to get late in the rounds again and hold up some hardware in the winner’s circle. I hate to admit that I almost forget what the thrill feels like going up for the final round. I have to constantly remind myself that when the luck turns around, it’ll really turn around. Dad has been preaching that to me since day 1. He has told me that he’s had ruts like mine, then when it comes around, you’ll be on top of the world for a while.

I believe him because of a turnaround I had in the Juniors four years ago. During the losing streak I was going through, I almost took a weekend off because I was getting so frustrated. I thought that taking a break might help me come back the weekend after with a clear mind. By the way, it really takes a lot for me to think that. I could lose my leg and the next day I would be begging dad to put a hand brake in the car. Seriously, I am not kidding.

I decided to race that weekend and ended up winning. Then the next weekend I won again. For the rest of the year I was getting late in the rounds and was basically unstoppable. Basically, what I am saying is that better race days are to come. Ride out the bad race days, and take what you can from them. It is easy to just say that, but trust me, your time is coming. I still have to tell myself that right now because my luck hasn’t gone the other way yet.