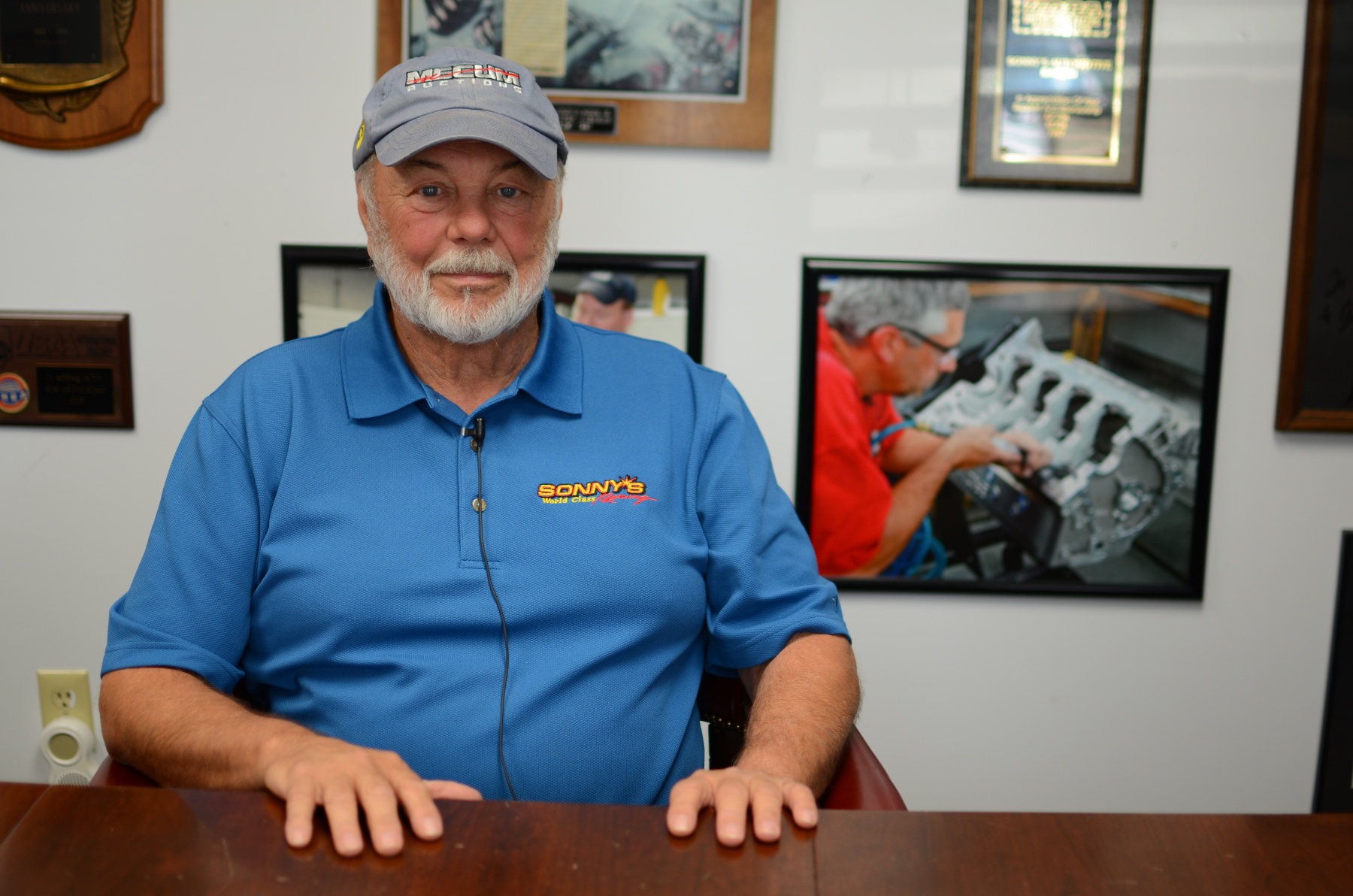 Legendary engine builder Sonny Leonard passed away Sunday, January 10, 2021, at age 77. News of Leonard’s passing spread quickly on social media Sunday morning before being confirmed on the Sonny’s World Class Racing Engines Facebook page. Leonard had been in the hospital battling a case of pneumonia over the last couple weeks.

Leonard was a beloved character in the doorslammer racing circles, known not only for the quality craftsmanship he displayed in his engine work, but also for the way he took care of his customers. Sonny’s Racing Engines provided power for customers in a wide range of classes, from Pro Nitrous and Pro Modified to Mountain Motor Pro Stock and Top Sportsman. Leonard’s engines were also wildly popular in the world of truck pulling.

Leonard was an innovator, always looking to make his engines bigger and better. Perhaps his most infamous project in that thread was the 1,005-cubic-inch engine he developed in 2011. In this interview by Ian Tocher from the April 2011 issue of Drag Illustrated, Leonard discusses the engine building process, the potential and limits of the monster motor, and what’s made his business successful for decades.

Sonny Leonard made his name in drag racing by building big engines, but it was important, he says, for his latest creation, a 1,005-cubic-inch monster motor, to take the concept to the proverbial next level.

“It’s just like running 199 mile an hour; it’s not 200, and this is kind of the same; 999 just wouldn’t catch everyone’s eye like a thousand cubic inches does. It breaks that barrier,” says the 67-year-old Leonard, who since 1969 has been turning out high-horsepower big blocks from his Lynchburg, Virginia, base.

His customer list is a star-studded roster of mountain-motored Pro Stock and nitrous-boosted Pro Mod racers, including the likes of Rickie Smith, John Montecalvo, Cary Goforth and Johnny Pilcher, among others, and his current product line-up includes engines ranging in size from the baby of the family at “just” 555 cubic inches up to a naturally aspirated Top Sportsman 932 cubic incher—not counting his latest offering, of course.

Drag Illustrated spoke recently with the Dr. Frankenstein of big-block horsepower about the monster he’s about to release on the drag racing landscape.

Drag Illustrated: What led up to the development your new monster motor?

Sonny Leonard: Well, we designed a five-inch, symmetrical-port, hemispherical cylinder head back in 2004 for IHRA Pro Stock. From that point on we built the five-inch heads and we had approximately 825 cubic inches because Pro Stock and IHRA allowed 825, but the limitation was five-inch bore spacing.

Then later they wanted a larger cubic-inch engine for Pro Modified, so we designed another new cylinder head to accommodate a 5.300 bore space so we could run a larger bore and make a head that could use larger valves at the same time. When you make an engine that large you’ve got to have a cylinder head that can feed it, so we had to do a lot of work to ensure it received the airflow that it needed.

Everything is based off the design of a big-block 427/454 Chevrolet; only everything is larger in proportion. Right now I don’t want to comment on the bore and stroke, but it’ll work out to about 1,005 cubic inches when it’s done. So we are building that engine right now and probably it will be on the dyno by August.

The process of making it bigger means you’ve got to make the block accommodate more stroke and you’ve got to make it accommodate more bore. In this size engine we made the block an inch and four-hundredths longer than the big-block Chevrolet, which is what we designed for the 5.300 bore spacing motor three years ago and it’s what we’ve been running in ADRL and NHRA in Pro Modified.

So we used that block to build this engine, but to do something like this everything has to be custom made. You have to have a custom-made block, custom-made crank, camshaft, cylinder heads; but one good thing about it, we own our own tooling for the heads.

DI: How will the new engine perform in comparison to your other offerings?

Leonard: When you make an engine this large, in most cases it’s not as efficient as an 800- or a 700- or a 600-cubic-inch engine because the bore is so much smaller than the stroke; that’s just the nature of the beast. When you’re looking for a thousand cubic inches the ideal would be a bore maybe 3/8ths or 1/2-inch larger than we used and less stroke to make it more efficient, but it’s not feasible right now to do that. Of course nothing is impossible, you know you can do almost anything you want if you’ve got time and money, and that’s just what it takes.

DI: So, what led you to build the engine at this time?

His name is Craig Olson and he’s out in Washington (state), where he runs Top Sportsman and Top Dragster and we’ve built him four engines before. Anyway, he said, ‘Sonny, I’d like to have the largest engine you could build,’ and I told him it wouldn’t be the most efficient, but the largest I could build—that’s feasible—would be 1,005 cubic inches, which is the largest V-8 engine ever built for drag racing.

It’s also very, very expensive to build something like this, but we kind of like to be innovative and we’re known for large-cubic-inch engines. But since we own the cylinder heads and tooling, that helps.

DI: It probably wasn’t that long ago you couldn’t even envision 1,000 cubic inches, but when did you start to think it possible?

DI: Is the limiting factor for engine size getting to be the finite space available under the hood and between the fenders?

Leonard: Exactly. It’s a billet block and you can make anything you want out of billet, but we use the same overall length that we have in our Pro Modified engine, so that monster is already in there mighty tight. And also the ADRL has imposed a bore-space limitation (5.3 inches), so I’m thinking they’re not going to allow a block any longer.

I would like to have had a larger bore and a smaller stroke to make a more efficient engine and reach a thousand cubic inches, but it’s really not feasible with that block.

DI: So, what’s the advantage for your customer to use this engine?

Leonard: Well, one thing is bragging rights—to have the first one—but the second thing is it definitely makes more torque, so if you can hook it up it’ll definitely go fast. The RPM will be 8,000 max and there’ll be more torque than the car really wants to see, anyway.

DI: Is longevity or reliability going to be an issue with the larger engine?

Leonard: Well, instead of getting 60 runs he might just get 35 or 40 before he has to put new rods in it, but he knows that going into it. And hopefully we can put a cam in it that’s not too hard on valve springs, maybe just change the valve springs at every other race or something like that.

It wouldn’t be a good application for boats. You couldn’t run that much stroke and the block would have to be taller for an endurance application like that.

DI: Do you anticipate selling more of the 1,000 c.i. engines or is this more like a one-off experiment just to prove you can do it?

Leonard: It’s hard to say because of the economy, but I would think there is probably somebody who would want to buy one to put in a dragster to be the first to run five seconds with no nitrous or no forced induction.

And I do have a customer in Nevada, his name is Dave Traitel, and this is really neat, we built him a 940-cubic-inch engine for a street car and now he’s talking to me about a thousand cubic inches in a street car. Of course for the street application we’ll detune it a bit. There will be less compression, less camshaft, less power, and it’s not something you’re going to drive across the country with, but you could take it for a local cruise, go to your neighborhood drive-in, that kind of thing. This engine could be made to accommodate that and I think he might actually be my next customer.

DI: You say the engine is naturally aspirated, but could you apply nitrous to it, too? 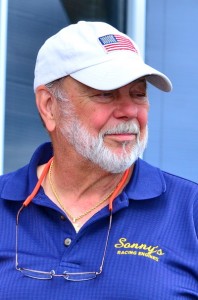 DI: So, the question everyone wants to know; how much will it cost to pick up one of Sonny’s 1,000-cubic-inch engines?

Leonard: About $125 thousand. If you look at Pro Modified, most people are getting about $90- or $95-thousand for a nitrous Pro Modified engine and a mountain-motor Pro Stock engine like the ADRL races, depending on the builder, it runs $105- to $120-thousand, so if you look at it like that, it’s expensive, but not out of line with other big, naturally aspirated engines.

DI: Are you currently involved in any other major projects?

Leonard: We’re working with a company out in the Midwest right now on maybe building a boat application based on 5.300 bore spacing and having about 825 cubic inches to run naturally aspirated on unleaded fuel and also supercharged on unleaded fuel, which would make about 2,000 horsepower. I think it would make for a really good combination for the pleasure boat industry because if you can make something really fast that’ll also live, they’ll buy.

DI: What does it take to stay in business and remain near the top of your craft after 42 years?

Leonard: I enjoy the challenge. I guess that’s why I’m still working. I’m getting some age on me, but I still enjoy what I do and I like being innovative and coming up with products that somebody else doesn’t have, and hopefully something that my competitors will buy from me also.

We sell our cylinder heads to our competitors; it doesn’t matter to me because I know if I can build this head I can always go to the next step later. I actually enjoy selling my cylinder heads and manifolds to my competitors; you’d be surprised to know how many of our parts are on some of their dynos. A lot of guys buy our parts semi-finished and then do their thing to them and that’s alright, too.

And you know, you have to have good employees, so I give part of the credit to them, too. The only thing they don’t do is work the hours that I do and I don’t expect them to, but I appreciate them very much.