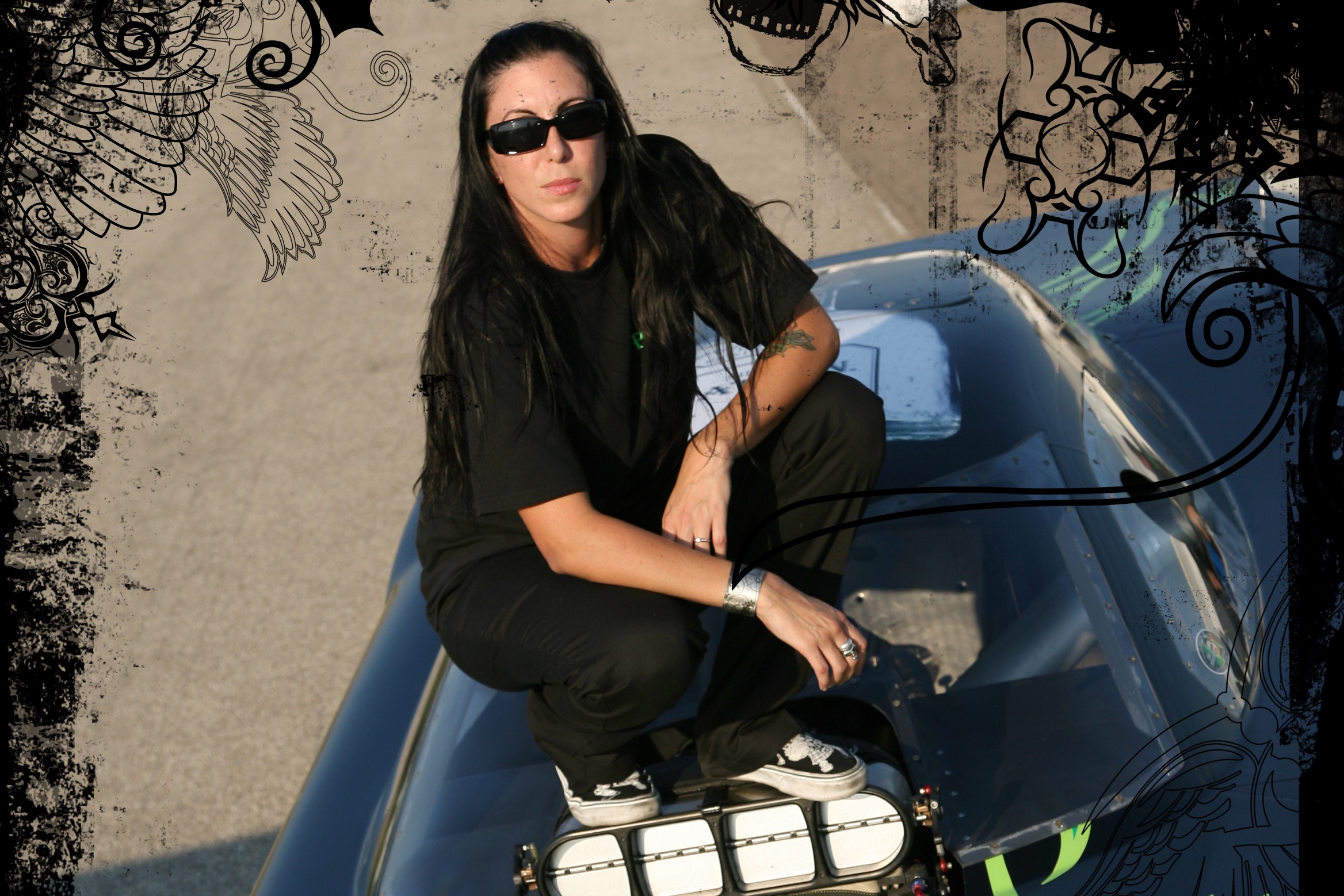 There are many names that come to mind when you think of the myriad of diversity that is the sport of drag racing. As surprising as it may sometimes seem, you can find people from just about every walk of life, race and religion in the pits at the strip. In recent history most of the ruckus has surrounded the racial diversity in professional drag racing and the influx of women into a sport seemingly controlled by men; there’s a different take here, though, as Alexis DeJoria arrives in Top Alcohol Funny Car.

What’s the big deal, you ask? Her last name, mainly, as she is daughter to billionaire business tycoon John Paul DeJoria – known best for the Paul Mitchell line of hair care products. One would have a hard time imagining the daughter of a person of such stature between the frame rails of a blown alky flopper, but it’s undeniable – the billionairess has gone drag racing.

Considering the above, it’s easy to stereotype Alexis, a Los Angeles, California-native, as a highfaluting, nose in the air kind of person. Everybody knows the type, but anyone who put that on Ms. DeJoria would be an absolute mile from the truth. She’s earning her stripes the same way any other fledging racer has had to do; it’s hard work and dedication that only those who’ve been there can relate to.

Rather than going out and just buying the best ride in her category of choice, Alexis got her start in NHRA Super Gas and Super Comp with a rear-engine dragster and after winning a divisional race in 2006 at the Fontana, California drag strip, she made the decision to go after her true passion – Funny Car racing.

“I knew what I wanted to do,” explained Alexis, “but, I wanted to go about it the right way. It’s easy to get out here and be in way over your head; that’s something that I wanted to avoid. That’s why my first stop in this whole project was at Frank Hawley’s Drag Racing School. I did well down there and felt comfortable advancing to the Top Alcohol class. I went to a couple finals and won one in Super Comp just before the school so I went in with my confidence at an all time high – which probably helped a lot. I knew going in that this was going to be intense, but I’m in it for the long haul.” Listening to her humble and down to Earth personality, a person almost wonders if this is young lady is from the same DeJoria family that we associate with Hollywood VIP parties and the rest of the Los Angeles elite lifestyle.

Surprisingly, it is and even though Alexis was offered some opportunities that few get, she has done things her way since birth.

“I was the girl that played with matchbox cars instead of Barbie dolls,” she admitted. “I was introduced to cars, hot rods and ‘going fast’ at an early age as my dad was into the Cannonball Run type of stuff with Ferarris and Lamborghinis. I gravitated towards the guys who were working on their cars in high school; that’s where I really got into drag racing. I suppose everyone has the same story and I definitely don’t want to glorify it, but street racing was some of my earliest memories of racing and it just grew from there.”

It all came together for the young lady one fateful summer day at the Fairplex in Pomona when she was first exposed to nitro racing. Without any hesitation, Alexis knew that she had found what she wanted to do – drive a Nitro Funny Car. Wanting to do something and actually doing it are two completely different things, though, and when John Paul DeJoria brought Alexis into his office to ask her what she wanted to do for a living – he was surprised to hear “be a drag racer”.

“I knew from the first moment that I smelled the nitro and saw the cars go down the track; that’s it, I found it. I knew exactly what I wanted to do with my life and I had to put things in motion to make it happen. My dad wanted to talk to me about how I’d be involved with his companies and get my input on what I wanted to do and I think I definitely shocked him with drag racing; although it probably didn’t come as much of a surprise as I was always the wild child.” 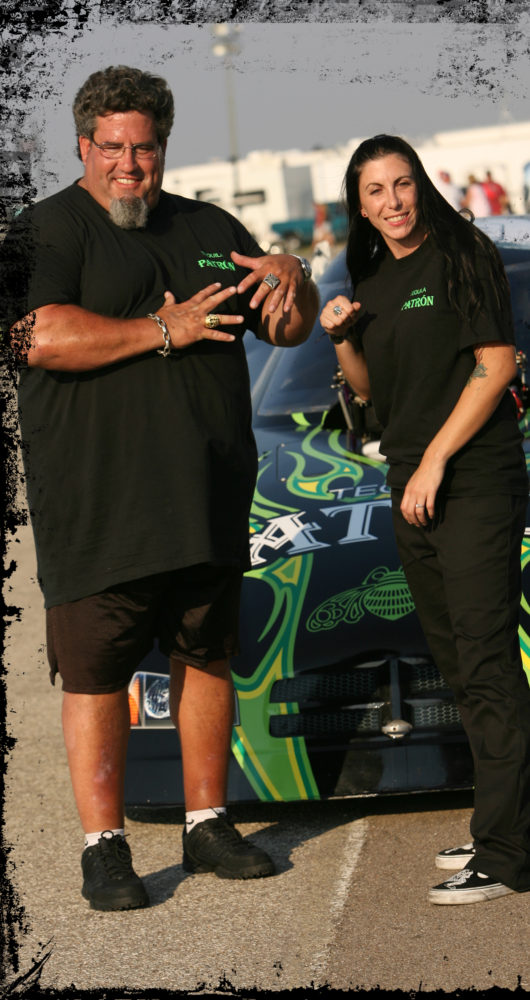 So rather than take a position with Paul Mitchell, Patron Tequila or any of the other DeJoria-owned and operated companies, Alexis started putting together a race team. With the blessing and full support of Patron Tequila, a company Alexis is part owner of, she went to work forming a team with the help of close friend “Big Bruce” Comtois.

Early in 2007 an announcement was made that Alexis would be teaming up with the Jack O’Bannon Racing team and be a teammate to Sean O’Bannon, who was racing Top Alcohol Dragster at the time. It was only a few races before the O’Bannon’s made the move to Funny Car and they now field two Patron-backed cars.

“I’ve always been a thrill seeker and my dad accepted it a long time ago. He just wanted me to stay alive and be safe and when I first told him that I wanted to drive Funny Car, I don’t think he really knew what exactly entailed. I brought him out to Pomona for the NHRA event and was showing him some of the cars in the staging lanes and the first thing he said to me was, ‘That’s where you sit? With the engine in your lap? I really think what you want is a dragster, they are so pretty.’ Luckily, I ran into Ashley Force shortly thereafter and I had her explain the pros and cons of both and I tried to tell him that random things happen – regardless of what kind of car you’re in. I think we’ve seen a lot of it lately and it’s just part of it; racing is unpredictable and so is life.”

Even though Alexis definitely fits the part of drag racing chick more than a lot of the girls in the sport today, complete with tattoos and jet black hair, she’s had her fair share of learning to do when it comes to manhandling nearly 4,000 horsepower down the quarter-mile.

“School is in session. I’ve spent most of this season getting acclimated to the car and tightening up my driving,” explained DeJoria. “It hasn’t been easy and there have been a lot of bumps and bruises along the way, but I’m glad to get all that out of my system early in my career.  From tire shake to going into the sand to tagging the wall; I’ve definitely gotten beat up a little this year. Being around the O’Bannons and working with Randy Anderson [Crew Chief for DeJoria] has made all the difference.” Going into the NHRA Winternationals in Pomona, California, Alexis’ home track, the plan was pretty straight forward – if the car gets out of shape or starts to shake, LIFT. Now that she’s gotten most of her rookie jitters out of the way, Alexis is learning how to cope with and overcome the many potential problems facing a Funny Car pilot.

“I seemed to be learning the different driving techniques one at a time and as soon as I get good with handling one situation, I’m learning how to adapt to another. We fought tire shake almost all this year and my first instinct is to peddle it and try to drive through it; Randy is now teaching me to short shift the car to get through it. He’s always telling me, ‘Stay in it and just plug it’ and I’m getting better about it.” 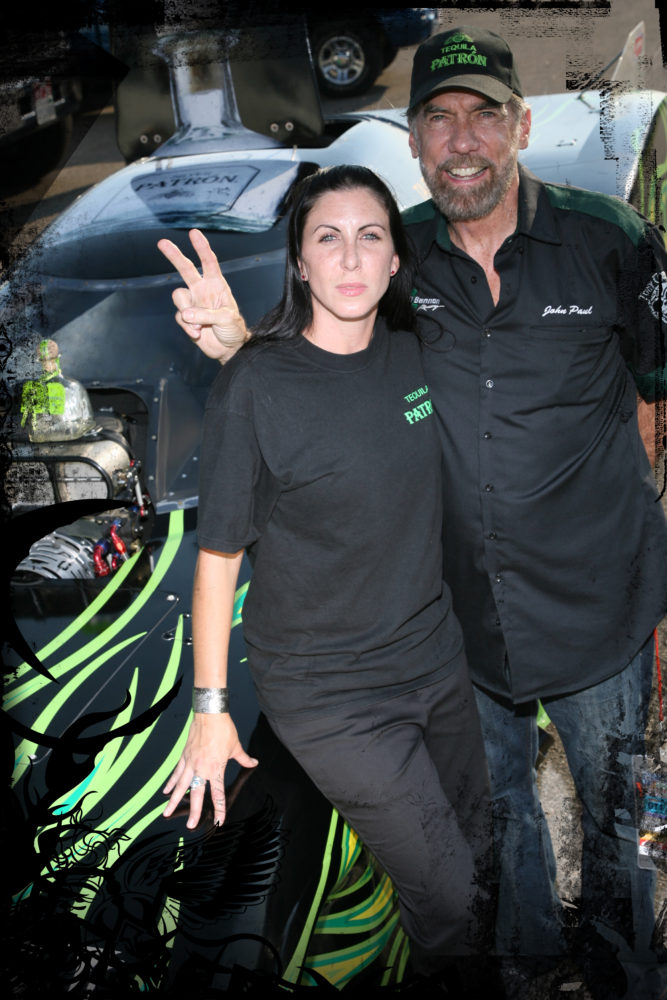 Going through the motions and visualizing the perfect run is how the rookie driver spends most of her time preparing, though. As she learned at Frank Hawley’s Drag Racing School, it’s all about envisioning what has to be done and being a robot inside the car; simply reacting to what happens and getting the job done.

One thing Alexis isn’t afraid of is to ask questions. She’s always asking questions of her fellow racers and crew; trying to learn every trick of the trade there is to know. Obviously, there are no better people to learn from than those you race with and against.

“Racing is so different than anything we do in our normal lives. I knew that I was going to have to be very open to learning and work just as hard gaining knowledge as I do on my driving. There’s nothing that we do on a daily basis that really relates to driving one of these cars; it’s like learning to walk again. It’s natural now, but it wasn’t that easy at first. I have a whole new appreciation for directing traffic.”

Who would have thought that a young lady who could essentially do whatever in the world she wanted to do would wind up as a drag racer? Albeit hard to imagine, she’s arrived on the scene and will be a contender in 2008. No matter what kind of wealth can be attached to her last name; Alexis has to be one of the most level headed people in the pits at a drag race.

“I’m so, so blessed,” Alexis said. “I’m so grateful to be able to do this. It really is a dream come true for me to be able to call myself a full time drag racer. I’m no different than these people. My dad had a rough life early on and he brought us up to be appreciative, to work hard and to do the right thing. He’d be damned if his kids grew up to be spoiled ass brats.”

She practices what she preaches, too. There have been a few occasions this year at various NHRA national events and divisional meets where a little special treatment was offered down from officials and she denied it.

“It’s not been too bad, but there have been a few instances where we’ve been offered a primo parking spot or to park our motor home with the trailer and such; it’s really unnecessary and I don’t believe in it. I don’t want to be noticed out here because of my name. I want to be noticed for my driving and that’s it.”

Despite being part owner of Patron, the higher-ups at the company have really seen a great response from their involvement with NHRA POWERade Championship Drag Racing and are eager to follow Alexis into the professional ranks. Depending on her level of comfort, Alexis will be considering a move to Nitro Funny Car as soon as 2009. Patron, of course, will follow her to what is quickly becoming the most competitive class in drag racing and continue to build their brand identity in motorsports.

2007 has shown Alexis DeJoria almost every feasible obstacle a drag racer can face; she’s waded through these ordeals like water – showing the perseverance and determination of a veteran drag racer.