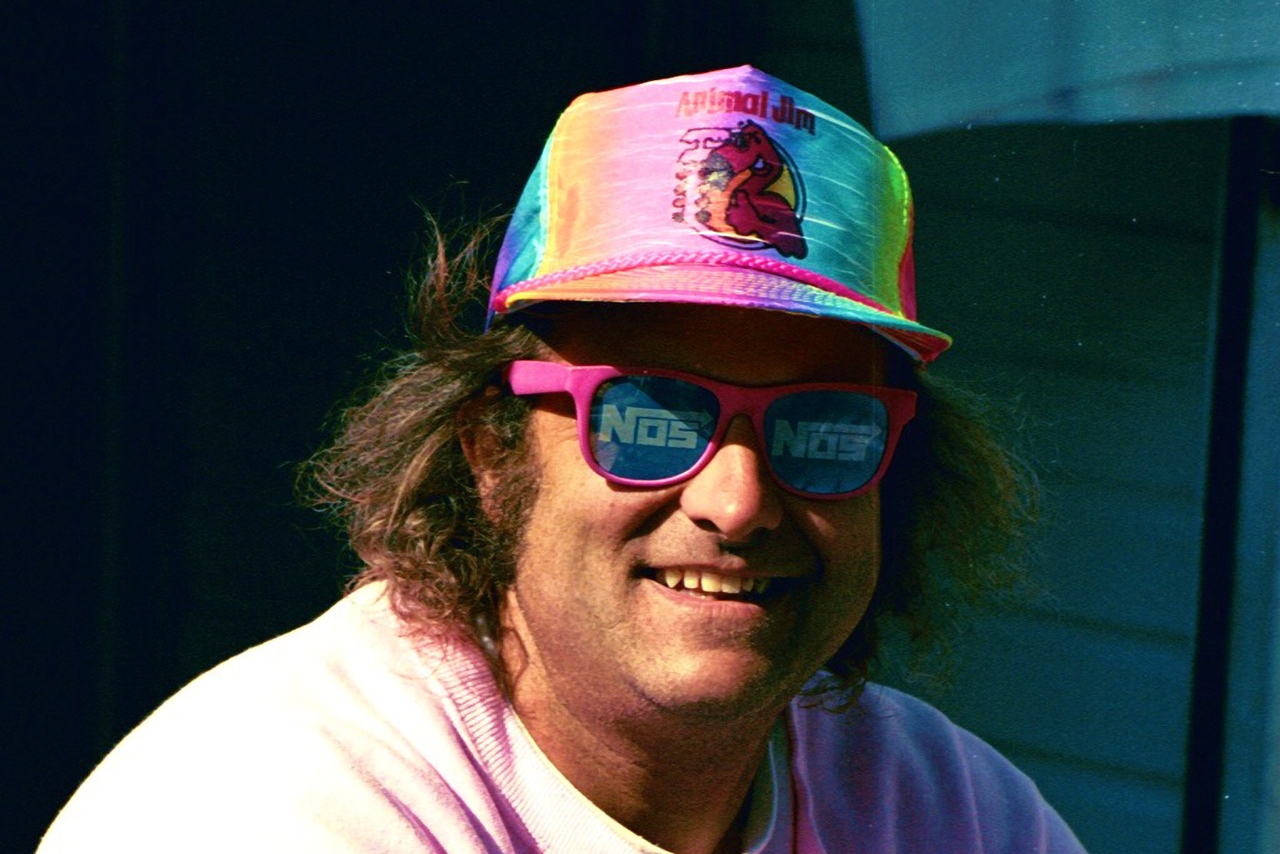 So, anyway, Bill Kuhlmann and I were quite the match race duo at the time, and we had a UDA race coming up in Kentucky – Bowling Green, I believe – and we were looking for bookings nearby the days leading up to the event. Well, Dwayne Nichols got us a booking at Clay City, Kentucky, the Saturday night before the UDA race. 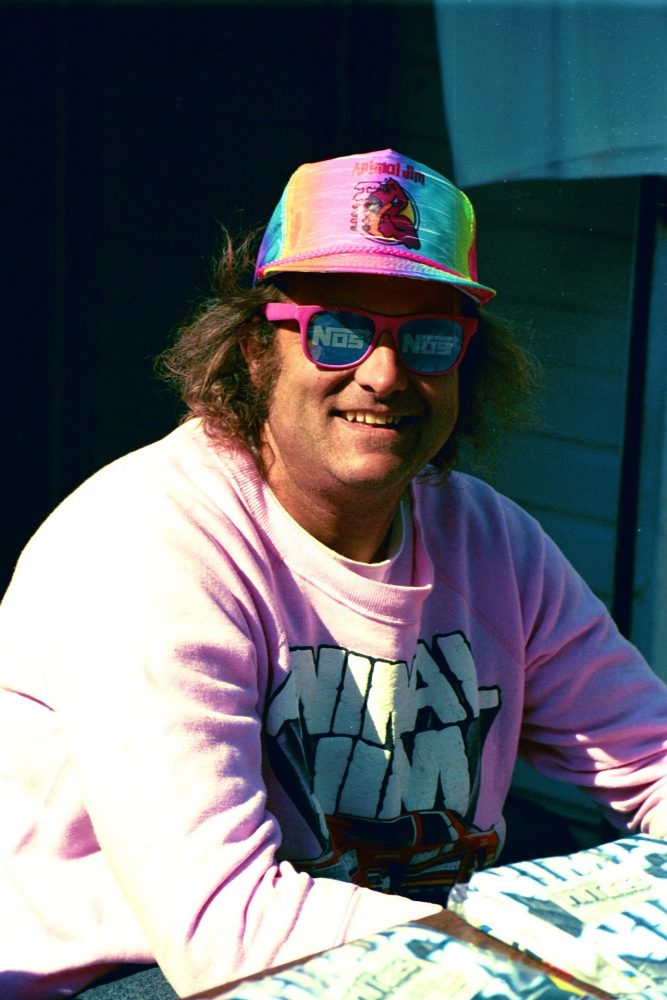 Bill and I got there early in the day. It’s typical little drag strip – a narrow little quarter-mile track with some old grandstands right up next to the track. It’s pretty neat territory with some small mountains around it or whatever. They also had a circle track there. Anyway, we were there early, and the track owner was taking Bill and I down to the big end to show us the track. At the end of the quarter-mile he turned to us and said, ‘The shut down is a little short here. If you can’t get stopped, we’ll open the gates to the parking lot for the stock car track.’

He points over at this big chain link fence, about maybe 14-feet wide. If you were going 200 miles an hour, 14-feet would be kind of like driving through a doorway – a high-risk maneuver. Not to mention, we’re supposed to run at night. So, anyway, we look that over and figure, hey, that’s cool with us.

Anyway, Bill and I had each won a round a piece – it was three runs – and the fans were just great. They were having a regular bracket race and Bill and I were the big feature for the night. So, the people were fantastic there, all kinds of fans and autographs and this and that. Come time for the third run and, of course, it’s dark by now – it’s getting to be well after 10pm and all of a sudden this fog comes rolling in, really heavy, so the bracket racers quit.

This fog is just hanging over the place, down in this little valley, and the track owner comes over and says, ‘I’ll tell you what, sometimes this fog lifts. Sometimes it lifts a little later around 11:30 at night. Why don’t you guys get in your cars, sit in the water box, and if the fog lifts we’ll fire you guys up and send ya’.’

Done deal, we say. You see, back in those days, you were contracted for X amount of dollars for three runs. If you only made two runs, it was 85-percent. If you only made one run, it was 65-percent. Bill and I wanted paid, and paid our full money, so we wanted to make all our runs.

The track owner told us to get in the cars and in the water, and when the fog starts to lift he’d give us the signal. Well, we waited in the cars about 10 minutes and by God, all of a sudden the fog lifted and you could look down the track – it was like being in a corridor, like a long hallway. Like a lot of those old tracks, the stands are right up close to the track, and people are just all over the place. Then you’ve got this ceiling of fog. There are little wisps of it down below, but you can still see down there pretty fair.

So, the guys gives us the signal. We do our burnouts, and we don’t want to cheat the fans, so we both do these big, long burnouts. We back up, get all situated, and just as we’re getting ready to turn the bottom bulbs on, BAM, that fog came down – just like a curtain. We had all our bulbs lit, and the sons of a bitches went yellow and away we went. We couldn’t see hardly anything at all, and it’s a pedal-fest ‘cause it’s wet and dewy. Bill hears me shut off the second time, and I’d actually got off the track a little bit because believe it or not that old track had rumble strips down the outside of the lane. And see, I’m on the rumble strip; I’m kind of off the track a little bit. I pull back on and I can kind of make out the finish line, so I thought, ‘Hell, we haven’t even gotten to the end yet!’ So, I hit it again and hit the nitrous, and Bill realizes what’s going on and put his back on the mat, but it’s too late. I got the win light. Of course, normally, you’d be disqualified for running off the track, but in a match race, hey, anything goes. 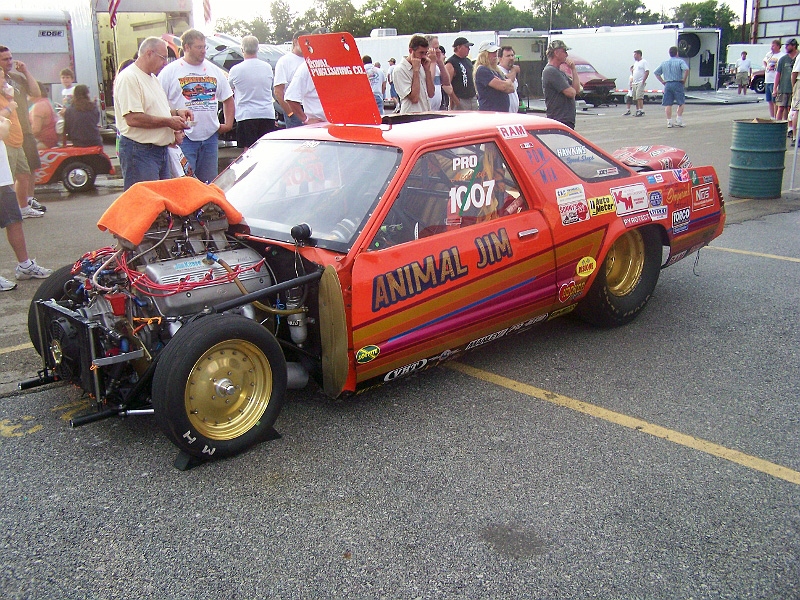 When we got down to the end, of course, we pull our ‘chutes and can’t see a thing. It’s darker than hell down there, and then you’ve got this fog on top of it. Man, I’m trying to get that thing straight and I’m thinking we’re probably not going fast enough that we’re going to even get to that big fence. I get stopped, get out of the car, and I don’t hear much. All of a sudden, I hear Bill somewhere over in the dark say, ‘Animal? Are you there?’ And I said, ‘Yeah, are you alright?’ He yelled back, ‘Yeah, are you?’

So, we’re walking back, picking up our ‘chutes, which were just soaking wet, and I finally started to hear the knobby tires on my three-wheeler coming down the return road with my guys to get me. Then, I saw this real dim light – the headlight on it – and they damn near ran into us because it was so dark and foggy down there.

I was up in Brainerd in 1992 on the Fourth of July and some guy walked up to me that happened to be there. He said, ‘I was there; I was there in Clay City and saw you and Bill Kuhlman run in the fog – it was unbelievable.’

It was a real wild deal. The stuff you do, ya know? You wonder sometimes; wonder a little bit about what you were thinking. What I call is it is panache. In French, panache means reckless courage. So, when you’re young sometimes you have a little too much panache. Maybe that’s why I crashed four times.