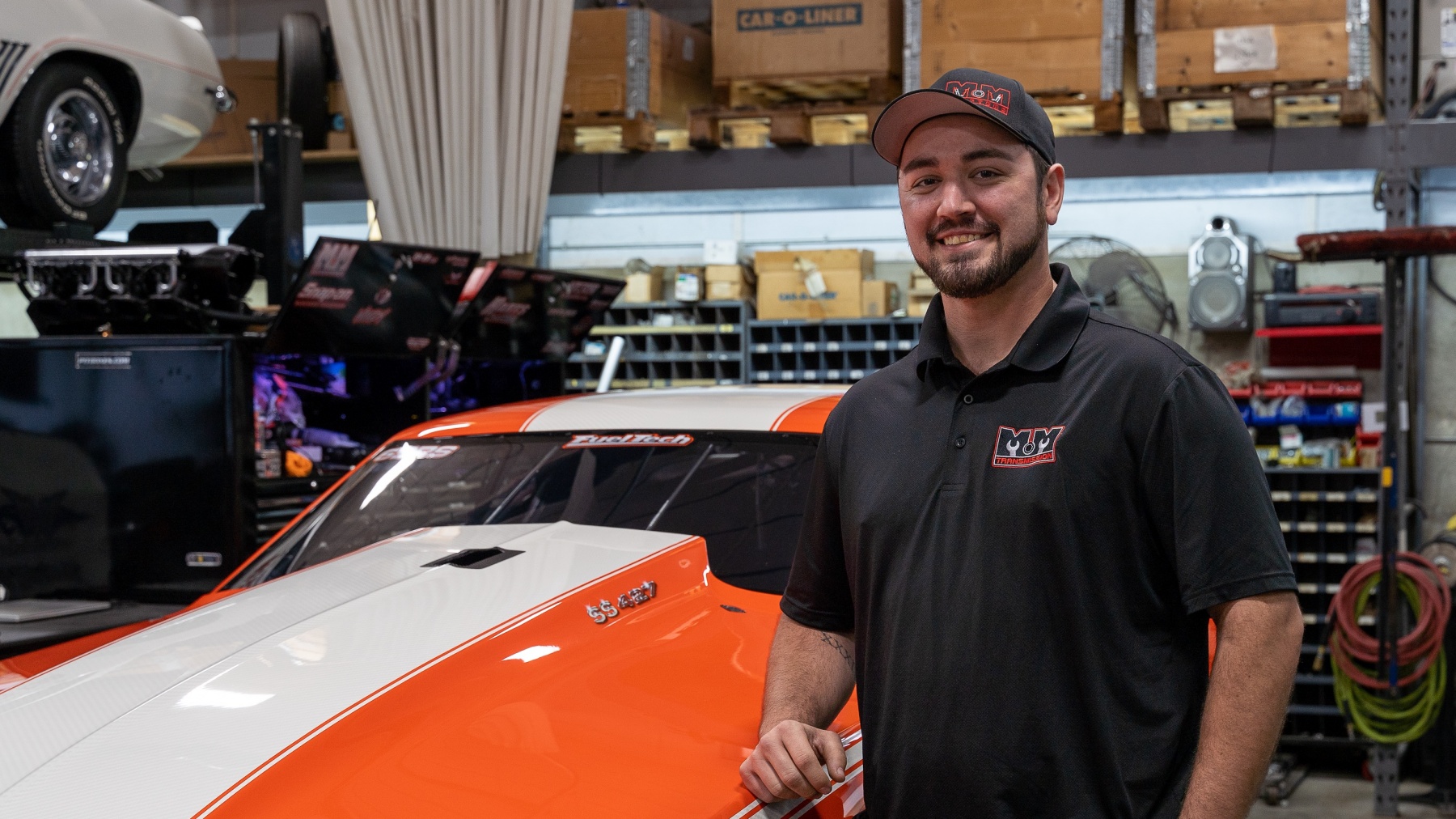 Damon Cole was just six weeks old when he first attended a race at Sikeston Raceway with his parents, Dave and Jill, and his cousin, veteran small-tire racer Mark “Woody” Woodruff. Woody ended up winning the race, and Cole didn’t know it yet, but he’d go on to be a part of many more winner’s circle photos with Woodruff and other racers who run transmissions from Mark Micke’s M&M Transmission, where Cole has worked since 2018.

It wasn’t Woodruff who got Cole a job with Micke, but a technical college instructor, Chris Cox, who worked with Micke when the shop still focused on everyday transmissions. When Micke asked Cox if there were students in his high-performance program who might be a good fit for the transmission shop, Cox said “No, not really, but there’s this kid named Damon. He was just at a drag race that you were just at too.” The race was Donald Long’s Lights Out at South Georgia Motorsports Park. Micke reached out to Woodruff as a reference and soon offered Cole a job.

“I started out taking apart stock case 400s, just learning what was inside of them, how they went together, how they would come apart,” Cole, 26, says. “Did that for about two or three months while sandblasting and sweeping the floors. It was just learning the repetitiveness of taking it apart, seeing if I could see what was wrong. After I learned all the machining of the parts, I started putting them back together. Now I freshen Turbo 400s and Powerglides here and there. I also do the rear ends at the shop while machining all the parts. After hours, I’ll work on the race car and drive the truck to and from the races.”

Cole also travels to around 15-20 events per year, whether he’s racing with Micke or just providing customer support at PDRA, MWDRS, NHRA Pro Mod, and major radial races. When he’s at those races, he works with some of the brightest tuners in the industry, bouncing ideas off them while providing manufacturer support.

“All the Pro Line guys work with our stuff and a lot of those guys, when they have a problem, they come over and ask me for my opinion,” Cole says. “I’ve learned a lot from Jamie Miller, Steve Petty, Josh Ledford, and Lee White. All those guys have really kind of brought me under their wing when I had questions. They provide feedback based on other problems they’ve seen. Being able to work with multiple teams has allowed me to help people across the board if I do have a problem.”

Cole also has two solid mentors in Woodruff and Micke, who have different approaches to racing. He grew up going racing with Woody, then he built on that experience by working with Micke in the transmission shop and on the racing side, first with Jason Carter’s iconic twin-turbo Malibu and now with Micke’s new ’69 Camaro Pro Mod.

“It’s definitely made me appreciate working under somebody that’s as smart and has been doing this racing thing as long as [Micke] has and turned it into a business,” Cole says. “I get the best of both worlds, because you have Mark Woodruff who’s here having fun hanging out and racing as a hobby. As I’m working with Micke, I am getting the business side.”

While Cole is interested in getting his own race car someday, possibly a 6.0 index car, he’s focusing on the behind-the-scenes mechanical aspect of racing for the near future.

“I think I’m going to try to be in this transmission business as long as I can,” Cole says. “I’ve found a niche and I really enjoy it. I like seeing our product do well or knowing that I’ve had my hands in making somebody faster. I like to have my hands into everything, learning it all. To me, drag racing is more of a lifestyle than a job.”