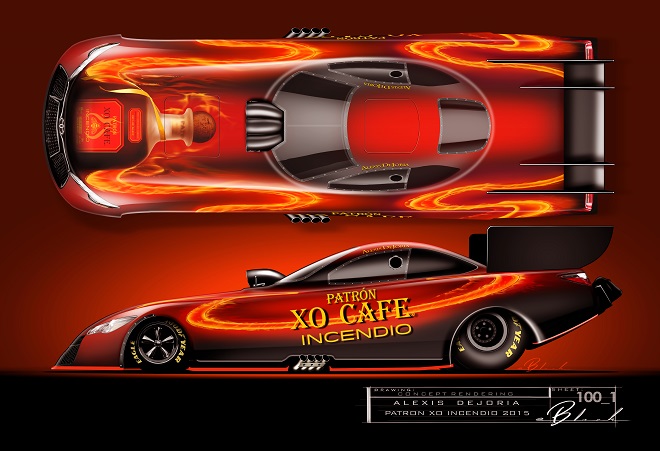 With the 2015 season opener, the NHRA Winternationals in Pomona, Calif., just days away, DeJoria and team are eagerly awaiting that first moment when they roll their 10,000-horespower Toyota Camry to the starting line, showcasing a fiery new look.

DeJoria’s Toyota Camry Funny Car spent the majority of the 2014 season painted in purple and gold, representing Patrón XO Cafe. At the final race of the season, fans were treated to a bold, new look: a red flame-emblazoned hot rod, commemorating the launch of the newest brand in the XO Cafe line, Incendio, an innovative fiery-hot chile chocolate liqueur. The Incendio livery was intended for one weekend only, and plans to return to the XO Cafe purple and gold scheme for 2015 were already in place. While watching DeJoria zip down the track that weekend however, ultimately claiming the top qualifying spot, no one could deny that her car looked hot! And thus, plans were changed.

“Last year when we celebrated the launch of Patrón XO Cafe Incendio, our intention was to change the look of Alexis’ Patrón XO Cafe Toyota Camry Funny Car for just the NHRA World Finals in Pomona. However, when we saw how terrific those graphics looked- particularly racing down the track at 300-mph with the flames shooting out of the car- and when we heard the overwhelming reaction from fans, it didn’t take us long to make the decision to make it a permanent change for the 2015 season” said Lee Applbaum, Chief Marketing Officer at Patrón Spirits. “There’s really no better way to showcase fiery-hot Patrón XO Cafe Incendio than on a 10,000-horsepower race car driven by Alexis.”

Armed with a hot new image and hungry to add more Wallys to their collection, the Patrón XO Cafe Incendio Toyota Camry Funny Car team has their sights set on the ultimate goal heading into the Winternationals: the 2015 Funny Car series title.

“Coming out of last year, which was really our breakout year, we accomplished so much more than we had initially expected,” said DeJoria, an Austin resident, and only driver to be victorious in the Super Comp, Top Alcohol Funny Car, and Funny Car classes. “Being that close to Championship contention, it made us hungry for it.”

“We’re going to keep charging ahead. 2015 is going to be a very strong year for the Patrón XO Cafe Incendio team, and we’re proud Patrón has presented us with the opportunity to represent the newest brand in their XO Cafe line. Anything is possible- we’ve won races, ran in the three’s, set records, qualified in the top spot; we’ve conquered everything except the big picture. This year, we’re going for it full force. We’re all eager to get back out there and kick-off the season on a strong note.”