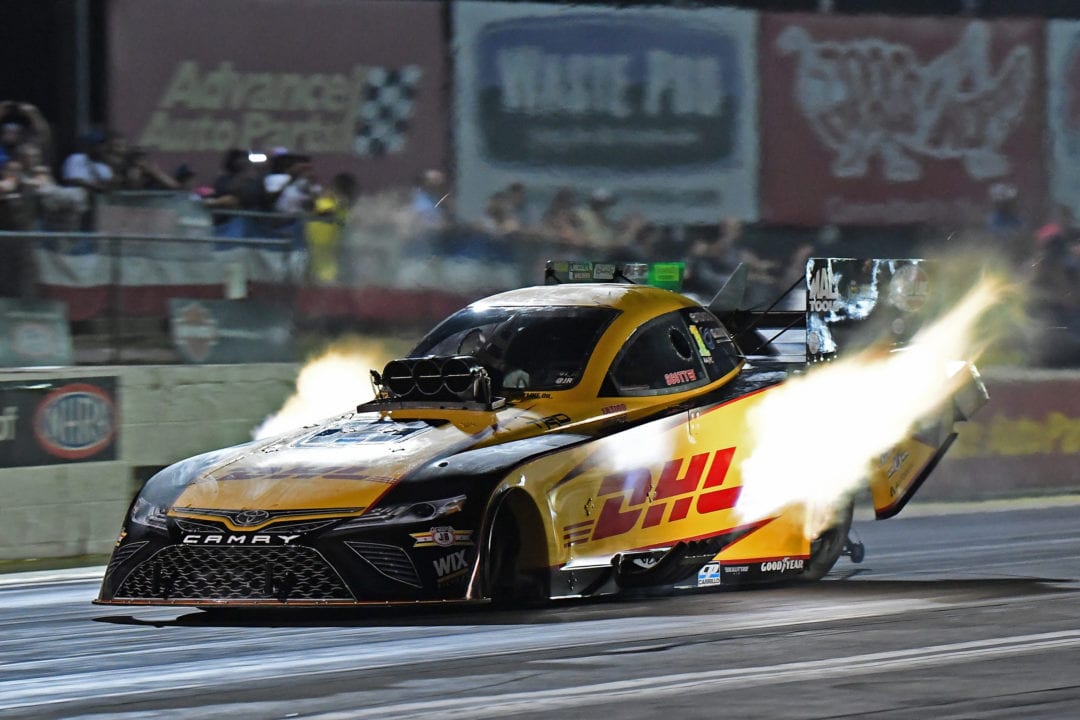 As the defending Funny Car world champion, J.R. Todd has experienced a bigger spotlight than any other time in his standout drag racing career. But through eight races in the 2019 NHRA Mello Yello Drag Racing Series season, Todd seems to be relishing the opportunity.
Todd is currently second in points heading to this weekend’s 22nd annual Route 66 NHRA Nationals at state-of-the-art Route 66 Raceway, putting him ahead of last year’s early-season pace. He has a victory in his 11,000-horsepower DHL Toyota Camry, the team has displayed impressive consistency no matter the weather conditions and Todd seems to be thriving with the added attention that has come his way. If anything, it’s pushed him to perform even better.
“There’s definitely been some perks that come along with winning the title,” Todd said. “The fans recognize you more, so there’s been more pictures and autographs and things like that, and that’s always cool. We definitely want to keep that No. 1 on the side of the car and try to grow the sport even more, just get involved in different forms of motorsports and raise the awareness of drag racing. But being able to do some of those things motivates you even more to try and repeat.”

Clay Millican (Top Fuel), Robert Hight (Funny Car), Jeg Coughlin Jr. (Pro Stock) and Matt Smith (Pro Stock Motorcycle) were last year’s winners of the event that will be televised on FOX Sports 1, including final eliminations coverage starting at 5:30 p.m. (ET) on Sunday, June 2. It is the ninth of 24 events during the 2019 NHRA season and also features the thrilling “Friday Night On Fire,” which puts Top Fuel and Funny Car drivers under the lights during the second qualifying session.
It starts at 9 p.m. and could showcase a prime example of how Todd and his team, led by crew chiefs Jon Oberhofer and Todd Smith, have run well in all conditions. They have proven to be quick, qualifying second in Atlanta, while also performing consistently on raceday, advancing to three finals and winning in Las Vegas. It adds up to an ideal combination, both during the start of this four-race stretch and if Todd wants to race for a second consecutive Funny Car world title.
“We’re in a better spot this year than at this time last year,” Todd said. “We’re second in points and we’ve run really well in hot conditions. That’s promising approaching these next four races and the summer, and that has everybody’s confidence up. We want to continue to build on our consistency, run hard when the conditions allow and get down the track when it’s warmer. You definitely have to be good in both conditions, and Jon O and Todd have done a great job with that.”
The key will be maintaining that consistency throughout the summer. Todd believes this four-race swing will give his team an idea of where it sits in the loaded Funny Car landscape. He trails only current points leader Robert Hight, but Ron Capps, who has back-to-back wins, Tommy Johnson Jr., John Force and Matt Hagan are all within 50 points off Todd. That means there’s no chance for a let-up, but Todd is confident in the Kalitta Motorsports team, especially watching the success of teammate Shawn Langdon, who recently picked up his first career Funny Car win.
“It’s been a positive for both of us,” Todd said. “There’s definitely differences between the two cars, but the crew chiefs and the teams feed off each other. That was a big monkey off their back getting that win, and now we can both focus on getting more wins. Richmond showed that both cars are going in the right direction and that’s a positive, having two really good cars moving forward.”