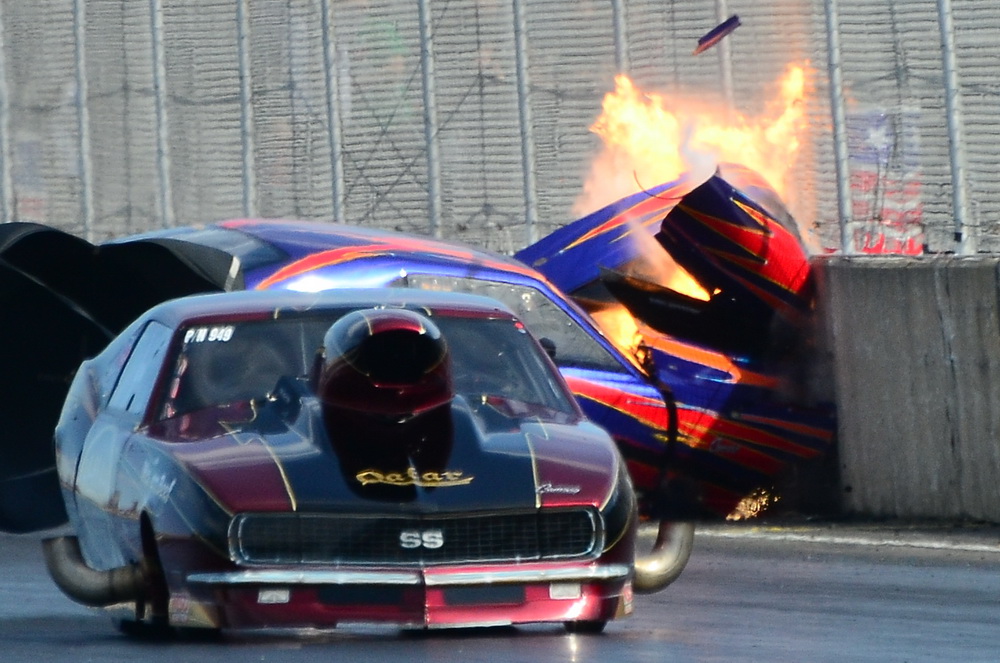 Jim Downing, the president of HANS Performance Products, cited John Decerbo’s fiery collision into the wall at the Rockingham Dragway as proof that drag racers need to wear head restraints.

Decerbo, who was wearing a HANS Device, hit hard with the right front corner of his Camaro during Pro Nitrous competition at Dragpalooza last weekend. A successful Pro Mod racer before stepping up to a record-setting stint in Pro Nitrous, Decerbo emerged uninjured and was back working at his construction company in Canfield, Ohio on Monday morning.

Decerbo became the first Pro Nitrous driver to race in the 3-second range using an automatic transmission and has won the DoorWars at Norwalk in Pro Mod.

In December, Downing made a presentation to the IMIS Safety and Technical Conference citing the need for the use of Head Restraints by sportsman competitors, those drivers who race on weekends and then return to work on Monday. When it comes to drag racing, said Downing, too many competitors believe they’re unlikely to hit the wall head-on despite statistics that say otherwise.

“At our IMIS presentation we documented 10 deaths in drag racing that likely would have been prevented by the use of a Head Restraint,” said Downing. Downing’s presentation was based on the Charlotte Observer report “Death at the Track,” which documented an increase in race car driver deaths from crashes in the 10 years after Dale Earnhardt’s fatal accident at Daytona in 2001.

The increases were greatest in the sportsman ranks. Downing’s presentation included a sled test at CAPE in Indianapolis. Instrumented tests without any Head Restraint confirmed that head and neck injuries can occur with a Delta V as low as 42 mph. The Delta V is the measurement of a sudden deceleration in speed.

“What we really like to talk about are the success stories like John’s crash at Rockingham,” said Downing. “I’m a small business owner, too, and I still race in the SCCA on weekends. I know how important it is to be back in my office on Monday morning. The HANS Device not only saves lives and families, it prevents serious and debilitating injuries.”

Based on the Charlotte Observer report “Death at the Track,” the HPP study and the summary of preventable deaths and a chart are available at http://hansdevice.com/s.nl/sc.12/category.60/.f