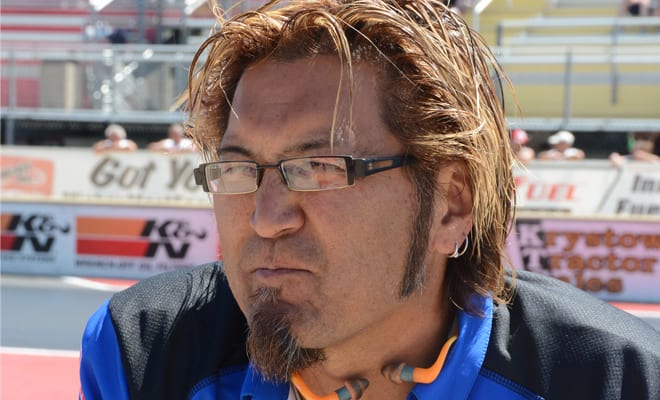 After driving his family-owned A/Fuel dragster to four national event wins between 1997 and 2013, Dave Hirata has settled into his new role as crew chief and car owner for sportsman sensation Mia Tedesco, who took over the controls of Hirata’s dragster at the beginning of last season. Hirata and Tedesco inked a partial race schedule for 2014, which expanded to a daunting 18-race campaign this season. While it’s taken some adjustment, the car owner role is somewhat natural to Dave, whose father, Kenny, co-owned the Bobby Vodnik-driven Top Eliminator car that won the 1963 U.S. Nationals.

“My whole obligation to Tedesco Racing is to give everything that I have, as far as dedicating to them the best car, the best parts, spare parts, and not be in a situation where ‘we should have’ or ‘why don’t we have this?’ We all have jobs, but I have a second job this year, and that’s this race car,” Hirata said. “It’s just a lot of work to do and we’re having a blast doing it.”

The duo of Tedesco, 21, and Hirata, 52, have excelled in just their second season racing together. “Miss Mia” earned her first national-event victory late in March at the NHRA Four-Wide Nationals in Charlotte. The C.A.R.S. Protection Plus dragster also picked up Lucas Oil Series regional event wins at Indy and Joliet, giving her the points lead in the North Central region. With Hirata and longtime Hirata Motorsports crew members turning the wrenches, Tedesco is poised to finish solidly in the top of the NHRA Top Alcohol Dragster national points chase.

Hirata recently took time out of his schedule at the family’s body shop to discuss his new role and the possibility of his return to the driver’s seat in the future.

How have you handled the transition from the driver position to the crew chief and driver mentor role?

It’s been fairly simple just because Mia has caught on real quick, and I knew she would because she’s been down the track a ton of times. I just knew she would get it. Besides one minor boo-boo at the very first race it’s been smooth sailing all the way.

As far as the transition, I’ve really enjoyed it, seeing this from the other side. It’s super-rewarding watching the car go down the track. I told my guys I’ve always wanted to be at the starting line when the scoreboards come on and you run a number. It’s very, very exciting from the starting line.

You have the car running better than it has in quite some time. Do you think a big part of that is your ability to spend so much time focusing on the tuning aspect?

I think so. It makes a lot of sense. I don’t have to worry about driving it or anything other than what the car is going to do. I don’t think about where she is or what she’s doing. She’s got a job. It just makes sense that there’s a ton more focus. I like to think that’s not the case because there will be a time when I do drive again. I’m just hoping I’ll be able to carry the same tune-up and abilities with me when I drive.

It’s been well-publicized that Mia has intentions to step up to Top Fuel within the next few years. Do you see yourself continuing to rent out the car to paying drivers, or do you plan on driving again?

I would entertain everything. We had talks with a young lady last year. It didn’t pan out, but we had the talk. Another young lady contacted me about getting her license this year, but nothing has come up. I would definitely entertain the thought of putting someone else in the seat when Mia moves up, or me driving, or I’d love to give a whack at Top Fuel, as far as being a part of her transition in some way. That’s just something that we’ll see what happens.

You ran a couple races in the Orange Crate front-engine Nostalgia Top Fuel dragster last year. What’s going on with that this season?

The nostalgia car unfortunately took a back seat to all of the racing we’re doing this year. Mr. Tedesco and I sat down at the beginning of the year and they wanted to run for national points this year, which I never really gave a full go ever since I started racing. We had 18 races scheduled out for the year, and unfortunately that took up the opportunities to drive the nostalgia car, although I got to drive it twice so far.

I’ve told people in a joking way that the nostalgia car makes my car seem boring. It’s just one of the most scary, fun, exciting things I’ve ever done. It fills the void of not driving my car and I totally miss it. There have been talks about driving it out in California at the end of the year, but we’ll just have to play that one by ear, too.