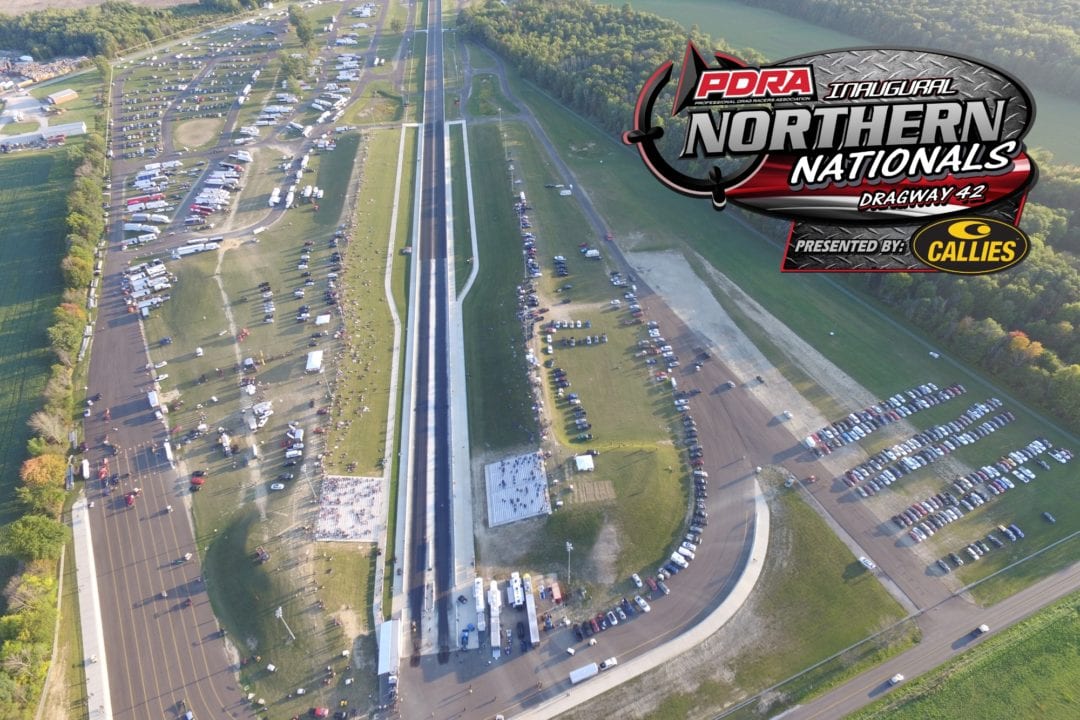 As the Professional Drag Racers Association (PDRA) enters the second half of its 2019 Road to the Finals schedule, championship points leaders in the three headlining professional classes carry a narrow lead into the PDRA Northern Nationals presented by Callies Performance, July 18-20 at Dragway 42 in West Salem, Ohio.

“I love updating points because I get to look at how many great racers we have that are coming to race with us every race,” said Tyler Crossnoe, race director, PDRA. “The pro classes are incredibly tight, then you look at the sportsman side and they’re as tight, if not tighter. Going into the second half of the season, this is a very important race.”

All three drivers will try to pad their leads with strong performances at Dragway 42, a new track for the all-eighth-mile drag racing series.

“[Track owner] Ron Matcham and his team have put a ton of work into rebuilding Dragway 42,” Crossnoe said. “Everyone here at the PDRA is excited to hold a race there. We had a large car count at our Ohio race last year, but we had a really bad forecast and had to cancel the event. We know that Ohio market is strong and there are a lot of cars in the area that might not be able to make the pull to some of our southern races. We’ve had a lot of messages from new entries and fans excited about us coming to Ohio.”

D’Aprile, the Pro Boost defending world champion, leads the charge in tuner Al Billes’ roots-blown ’69 Camaro after a win at the North-South Shootout at Maryland and runner-up finishes at the East Coast Nationals at GALOT and the Mid-Atlantic Showdown at Virginia. Kevin Rivenbark in the ProCharger-boosted GALOT Motorsports ’69 Camaro follows by less than two rounds with his win at GALOT. Maryland winner Kris Thorne follows Rivenbark by less than two rounds in his turbocharged ’17 Corvette. 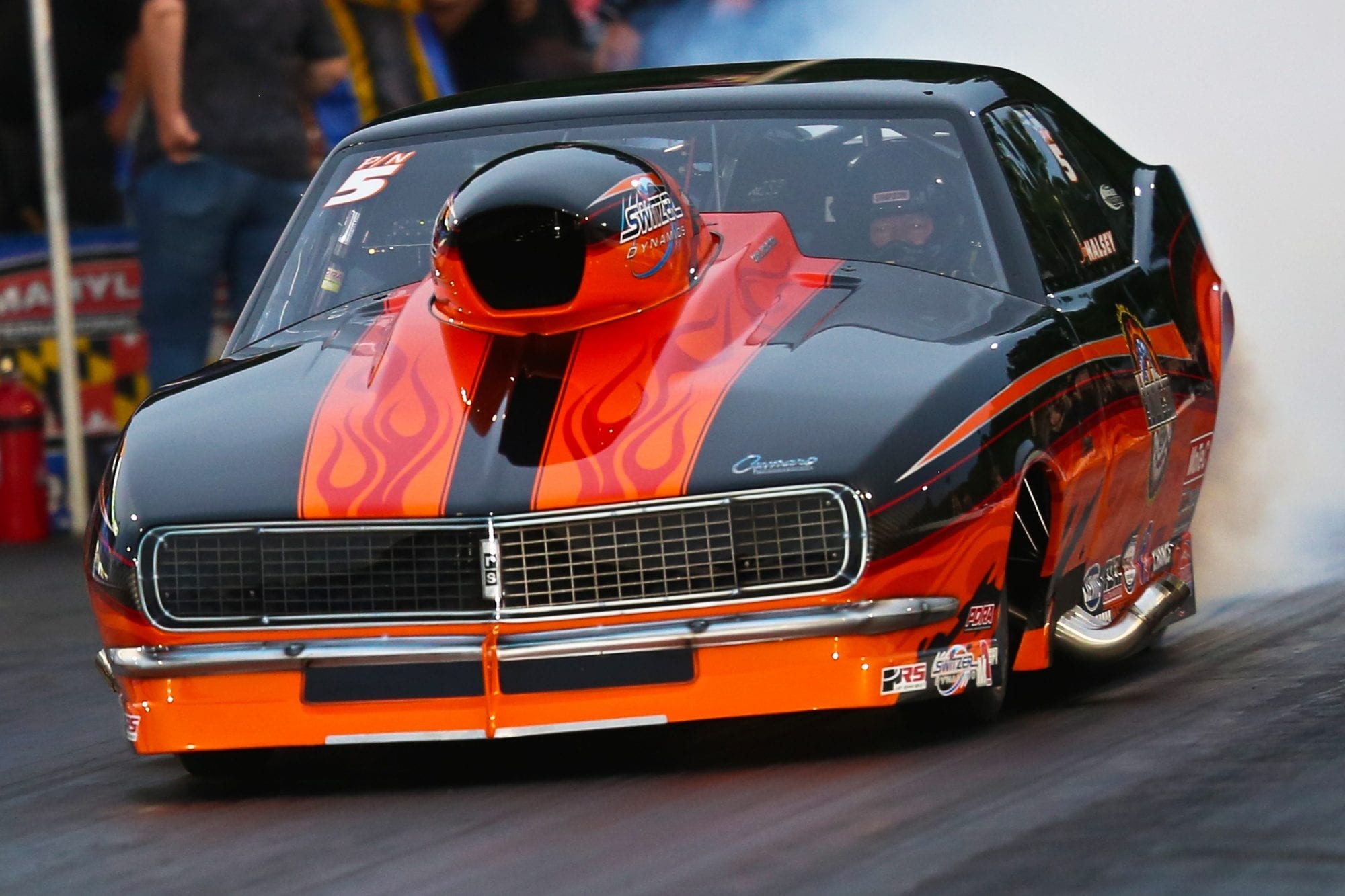 Halsey won the first two Pro Nitrous races of the season, GALOT and Virginia, in his Brandon Switzer-tuned, Fulton-powered ’68 Camaro, but he leads the points by just under one round of racing. The same consistency Jason Harris used to win the 2014 and 2018 world championships has helped him and the Musi-powered “Party Time” ’69 Camaro hold the No. 2 spot in points after a runner-up finish at GALOT and a win at the Summer Nationals at South Georgia. Two-time world champion Tommy Franklin in his Musi-powered “Jungle Rat” ’69 Camaro trails Harris by less than two rounds, while Jay Cox, Chris Rini and Lizzy Musi are within striking distance of the top three.

The closest points battle is thriving in Extreme Pro Stock, where the top four are separated by less than half a round. Virginia winner Jeff Dobbins leads the pack in his Bear’s Performance ’14 Dodge Avenger, followed by defending world champion and South Georgia winner Steven Boone in the Boone Motorsports ’07 Chevy Cobalt. Todd Hoerner is third with his win at Maryland and runner-up at GALOT in the Sonny’s Racing Engines ’14 Camaro. Runner-up finishes at Maryland and South Georgia put John Montecalvo and his Tommy Lee-tuned ’18 Camaro in the fourth spot. GALOT winner John Pluchino bowed out of the championship battle when he handed over the seat of his Strutmasters.com ’13 Mustang to his son, Johnny.

While racers in Schwing America Pro Outlaw 632 presented by Precision Chassis and East Side Auto Transport have the weekend off from a championship points standpoint, select drivers in the class will race at the Northern Nationals in the Pro Outlaw 632 Shootout presented by $hameless Racing. The one-off shootout will offer the largest payout in Pro Outlaw 632 history, paying $7,500 to the winner.

“We definitely want to thank Wes Distefano and $hameless Racing for coming on board as one of our newest sponsors,” Crossnoe said. “We’re proud to have the ‘$hameless Shootout’ at a PDRA race. It’s not a points race, but it will be a big-time bragging rights race. Maybe we’ll pick up a few northern racers who will want to come run the last few races with us and plan toward 2020.”

The PDRA Northern Nationals presented by Callies Performance will kick off with testing from noon to 9 p.m. Thursday. Friday qualifying will begin with the driver’s meeting at 9:30 a.m., followed by the first sportsman qualifying session at 10 a.m. Friday Night Fire with back-to-back pro qualifying sessions begins at 6 p.m. Sportsman final qualifying starts Saturday at 10 a.m., with professional eliminations slated to start at 4 p.m. A full event schedule is available at www.pdra660.com.

Tickets to the PDRA Northern Nationals presented by Callies Performance are available for $15 for Thursday testing, $20 for Friday qualifying and $25 for Saturday eliminations. An event pass, good for all three days, is available for $50. Children 12 and under get in free. Tickets are available at the gate or online at www.pdra660.com.