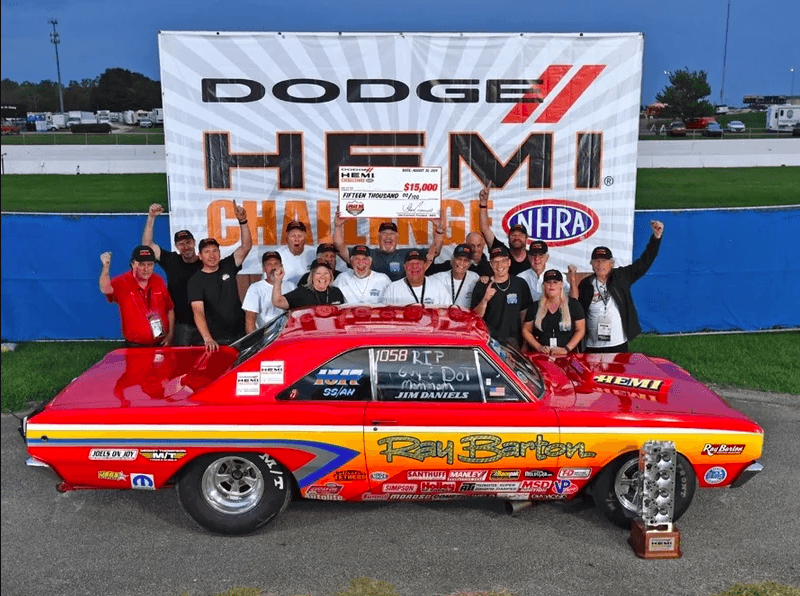 Daniels, the event’s No. 1 qualifier, defeated Ohio’s Rich Locker in his 1968 Plymouth Barracuda with a run 8.576 seconds at 156.01 mph in the final round of the 19th running of the special event, annually part of the U.S. Nationals, earning the $15,000 prize with the win. The victory was the sixth time a driver piloted the 1968 Dodge Dart to victory in the event. Daniel’s father, Jimmy Daniels, Sr., won the event in 2010 and David Barton won driving the same machine in 2000.

Daniels also increased his winning streak in the specialty race to 19 consecutive rounds.

“We had some tough battles to get this fourth win, including that semifinal,” admitted Daniels. “This HEMI Challenge is everything. We work all year for this. It means a lot for us. Special thanks to Dodge for continuing to support these cars and to the NHRA for allowing them to have the HEMI Challenge here in Indy.

“Ray and Dave Barton provide us with awesome horsepower.  If it wasn’t for them, we would not be able to do this. I’m surrounded by my family here this weekend – my father, my mother, my girlfriend and my grandfather. This race is probably the coolest win of the four for me. Earlier this year, I lost my grandmother unexpectedly. We know she was watching over us tonight.”

Daniels’ quest for win number four began with a bye run as a result of his qualifying effort Thursday. His pass of 8.494 seconds was the best of the opening round and launched him into round two where he delivered another smooth lap of 8.512 to defeat Doug Fazzolare. His 17th consecutive round win at Indy came over 2017 HEMI Challenge runner-up Wendell Howes advancing Daniels to the semifinals where he faced a very game Jim Pancake in an all-Dodge Dart matchup. Pancake posted an impressive .017-second reaction time, but Daniels was able to power by and turn on the win light with a margin of victory being a mere 0.0027 seconds and approximately 7 inches.

Locker qualified his Barracuda eighth and advanced to round two making a solo run of 8.660 seconds at 153.32 mph before defeating Louisiana’s Stephen Loeffler. He took advantage of a starting-line error by last year’s runner-up Gary Wolkwitz, who was disqualified for leaving the starting line early to advance to round three. Locker used a strong light to beat 2001 winner Bucky Hess on a holeshot with a margin of victory of .0242 seconds to advance.

In the final, Daniels grabbed the starting line advantage, but spun his tires just after the launch allowing Locker to grab the lead. Daniels’ gathered his machine under him and drove around Locker to secure the historic victory.

The NHRA Dodge HEMI Challenge showcases Super Stock/A-HEMI (SS/AH) NHRA Sportsman class competitors battling on the quarter-mile in 1968 Mopar package cars, powered by the legendary 426 HEMI engine. The Dodge Dart and Plymouth Barracuda Super Stockers are one of the earliest and most iconic iterations of the purpose-built vehicles created at the factory. The cars feature distinct race packages and are for use solely on the drag strip. The Dodge Dart and Plymouth Barracudas are precursors to the modern-day package car — the Mopar Dodge Challenger Drag Pak.