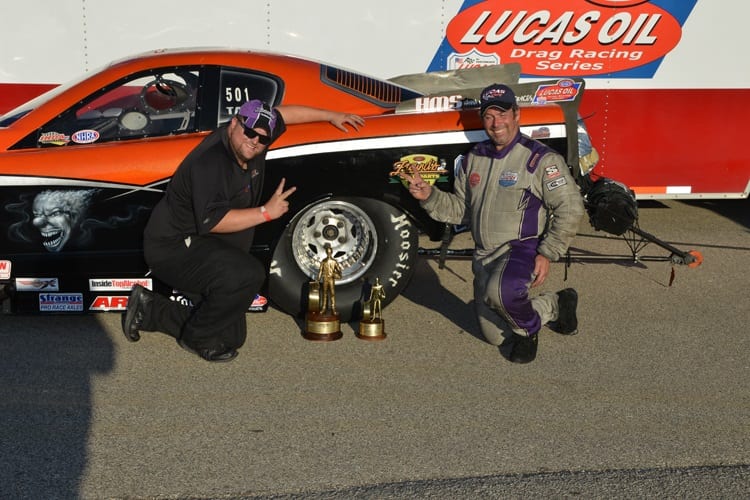 Three-time Divisional Champion Crew Chief Will Hanna will debut his own team in NHRA Top Alcohol Funny Car in 2016. The second-generation driver will return behind the wheel after eight years of tuning and consulting for Top Alcohol and Pro Mod teams all over the world. The endeavor will be Hanna’s first as a team owner in the alcohol ranks.

Hanna, 36, from Deer Park, Texas, hopes to experience some of the success he has given his tuning customers.

“When I drove for Harry Clack, we were just on the corner of getting our torque converter combination figured out in ’07,” stated Hanna. “Harry had some business opportunities come up he needed to focus his resources on, so he made the tough decision to sell the team. We had just got the car into the 5.60’s, which was pretty respectable back then.

“I have no room to complain because it was a tremendous opportunity to drive, but I have always wondered what could have been had we kept going,” continued Hanna. “I have been blessed to have the opportunity to start putting my own team together over the past year. I want to get a chance to drive for the 36 year old Will Hanna tuning instead of the 26 year old Will Hanna. I have learned a few things since then.”

Hanna is assembling his 2014 Mustang with an emphasis on quality over quantity.

“When this car hits the track, it will have the latest-greatest parts available,” explained Hanna. “At first we may not have a trailer full of spares or hit a bunch of races, but when we go on the racetrack, we will have as good of equipment as the best of them. We want to be able to compete when we roll in the gate.”

When not turning wrenches for customers at the track, Hanna has operated the popular website InsideTopAlcohol.com, which he created in 2001. The Army veteran has brought numerous sponsorship deals to his customers in the past, and hopes use the role as team owner to cultivate new relationships.

“Now being a team owner, I hope to deliver a solid package for companies to partner with us,” cited Hanna. “Sponsorship is a misnomer in my opinion. It’s really a partnership. You can’t slap a name on the car and tell a company you’re getting them exposure. You have to deliver ROI these days. I have negotiated a fair amount of deals for other teams in the past, but now I will have the flexibility to customize a package if need-be.”

Despite forming his own team, Hanna still plans to work for other teams as a Crew Chief and consultant. He currently works as Crew Chief for Scott McVey’s TAFC and works as a consultant for several other teams.

“I still plan on working with other teams as a consultant,” cited Hanna. “I hope to do a little in-house R&D with the car. Hopefully we can have it out testing early next year.”