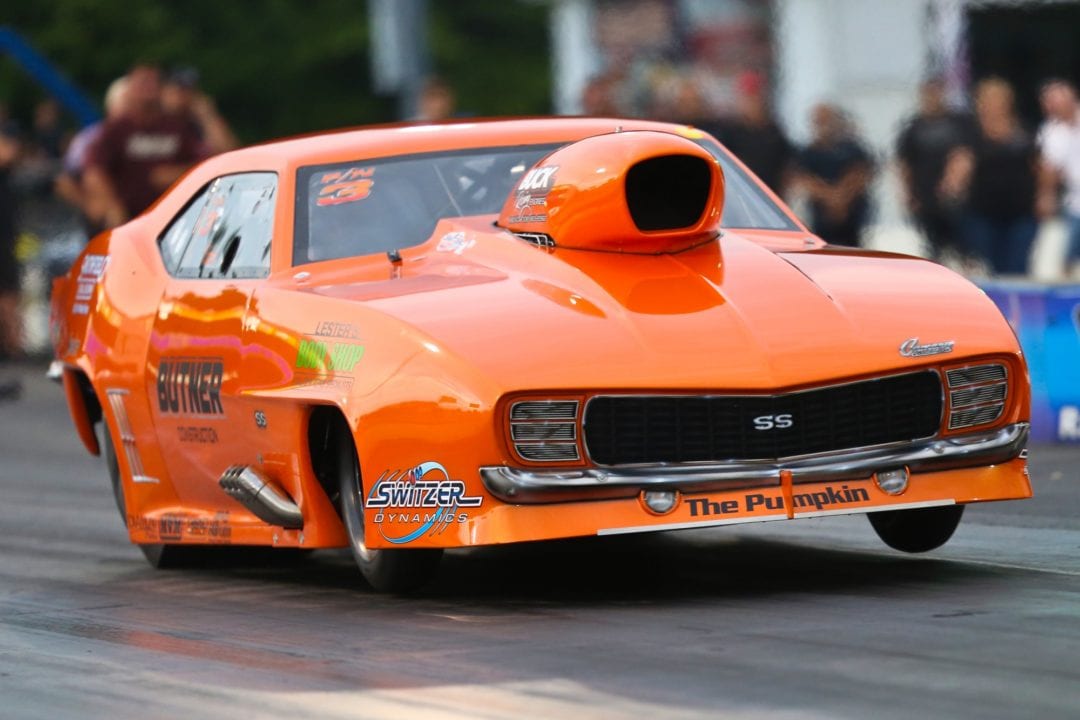 An eventful weekend of racing at the Professional Drag Racers Association (PDRA) North-South Shootout presented by Line-X at Maryland International Raceway concluded early Sunday morning when Jay Cox defeated Lizzy Musi in a rerun of the Switzer Dynamics Pro Nitrous final round. The original final round had to be rerun after debris blew through the sensors, tripping the eighth-mile clocks in Cox’s lane.

The Coolshirt Pro Jr. Dragster presented by Knoxtown Products win went to Brayden Davis, who ran 7.88 to defeat Connor McGee’s 7.864, both on a 7.90 dial-in. Earlier in the day, McGee won the final round from the rain-delayed Mid-Atlantic Showdown. Local racer Nathan Tanner, who won the Gilbert Motorsports Top Jr. Dragster final round from the PDRA Mid-Atlantic Showdown Saturday morning, also went on to win the Maryland race, running 7.984 on a 7.90 dial-in next to a red-lighting Zach Shirkey.

The final round in Pro Nitrous was one of two final rounds that had to be rerun due to debris blowing through the eighth-mile sensors. The win light came on in Jay Cox’s lane during the first running, though his scoreboard posted an invalid time next to Lizzy Musi’s 3.655 at 206.95. Around an hour later, Cox turned on the win light again, this time with a 3.677 at 206.48 in his Buck-powered Butner Construction ’69 Camaro. Musi was aggressive off the starting line, but slowed to a 5.878 at 79.52.

“It’s really rewarding any time you can win,” Cox said. “This is a max-effort racing class. It isn’t something you can take lightly. Pat (Musi) stood on his and I stood on mine. That’s all that motor had. My guys work hard, they deserve every chance to win. I hate that the deal ended up like that, but at the end of the day it is what it is.”

After qualifying No. 1 for the second consecutive race, Florida’s Kris Thorne earned his first Pro Boost event win in his twin-turbocharged ’17 Corvette, defeating defending world champion Tommy D’Aprile in the final round. Thorne used a .007 reaction time and a 3.703 at 216.38 in the Mikey Rees-tuned ‘Vette to take down D’Aprile’s low-of-the-event 3.683 at 202.30 in his Al Billes-owned-and-tuned ’69 Camaro.

“It felt really good – I’ve been wanting to get one of these wins for two years,” Thorne said. “We’re finally starting to get the bugs worked out of this thing and finally put all our ducks in a row and got our first win in PDRA. I’m basically just in the car holding on. I’ve got to give it all to the crew and all the Proline guys out here helping us. I just hope we can keep it up.”

D’Aprile, who defeated Jerico Balduf in the rain-delayed Mid-Atlantic Showdown final round earlier in the day, was the quickest driver in the opening round with his 3.72 at 200.32 over Balduf in a rematch of the Virginia final. The roots-blown Camaro improved to a 3.71 at 200.83 to beat Anthony DiSomma, then stepped up yet again to 3.692 at 201.16 over Terry Leggett to advance to his third consecutive final round.

Todd Hoerner’s triumphant return season to Extreme Pro Stock continued in a big way when he lit up the final-round win light, adding an accomplishment to go along with his runner-up finish at the East Coast Nationals and No. 1 qualifying effort at the Mid-Atlantic Showdown. Hoerner steered the Brian “Lump” Self-tuned TT Motorsports ’14 Camaro to a 4.073 at 178.73 next to John Montecalvo’s 4.107 at 176.84 in the final round.

“Man, it feels awesome to get this win,” Hoerner said. “I’m so tickled and I’m so happy for (car owners) Tommy Zarella and his wife Paula and his daughter Tiana. Without them, I couldn’t be out here. I’m doing everything I can to take him back that trophy. I’m just tickled pink and we’re very thankful. Any of these guys out here can win. It was brutally hot and humid and it sucked the life out of you this weekend. Fortunately, the car worked good and we were able to get the win.”

Hoerner qualified No. 2 in his Sonny’s-powered entry and ran a 4.105 at 178.14 to beat JR Carr in the first round. He slowed to a 9-second pass in the semifinals, but opponent Chris Powers went red by .008 seconds.

After getting into the eight-car field in the third and final qualifying session in his Tommy Lee-tuned ’18 Camaro, Montecalvo used a 4.137 at 176.21 to dispatch No. 1 qualifier Jeff Dobbins and his 4.164 at 175.50 in the first round. A consistent 4.121 at 176.30 followed to take out defending world champion Steven Boone in the semifinals.

Beam interference during the Pro Outlaw 632 final round led to the second rerun of the evening, with defending world champion Johnny Pluchino turning on the win light in both attempts. His scoreboard registered an invalid time in the first final, while Wes Distefano recorded a 4.206 at 173.65. When the two drivers returned to the starting line for the rerun, Pluchino set low ET of the event, a 4.195 at 168.51, as Distefano struggled to a 9.885 at 42.69.

“This class is getting really tough out here,” Pluchino said. “Wes is bringing the heat. Tony (Gillig) put me out in the (Mid-Atlantic Showdown) final. It makes winning that much better when the competition is that tough. There’s just no feeling like holding this trophy.”

Pluchino, who also made his Extreme Pro Stock debut this weekend, admittedly struggled with his Dominic Addeo-owned Strutmasters.com ’06 Ford Escort on bye runs in the first and second rounds. He rebounded with a 4.231 at 167.95 in the semifinals to eliminate 2017 world champion Dillon Voss and his 4.302 at 165.97. 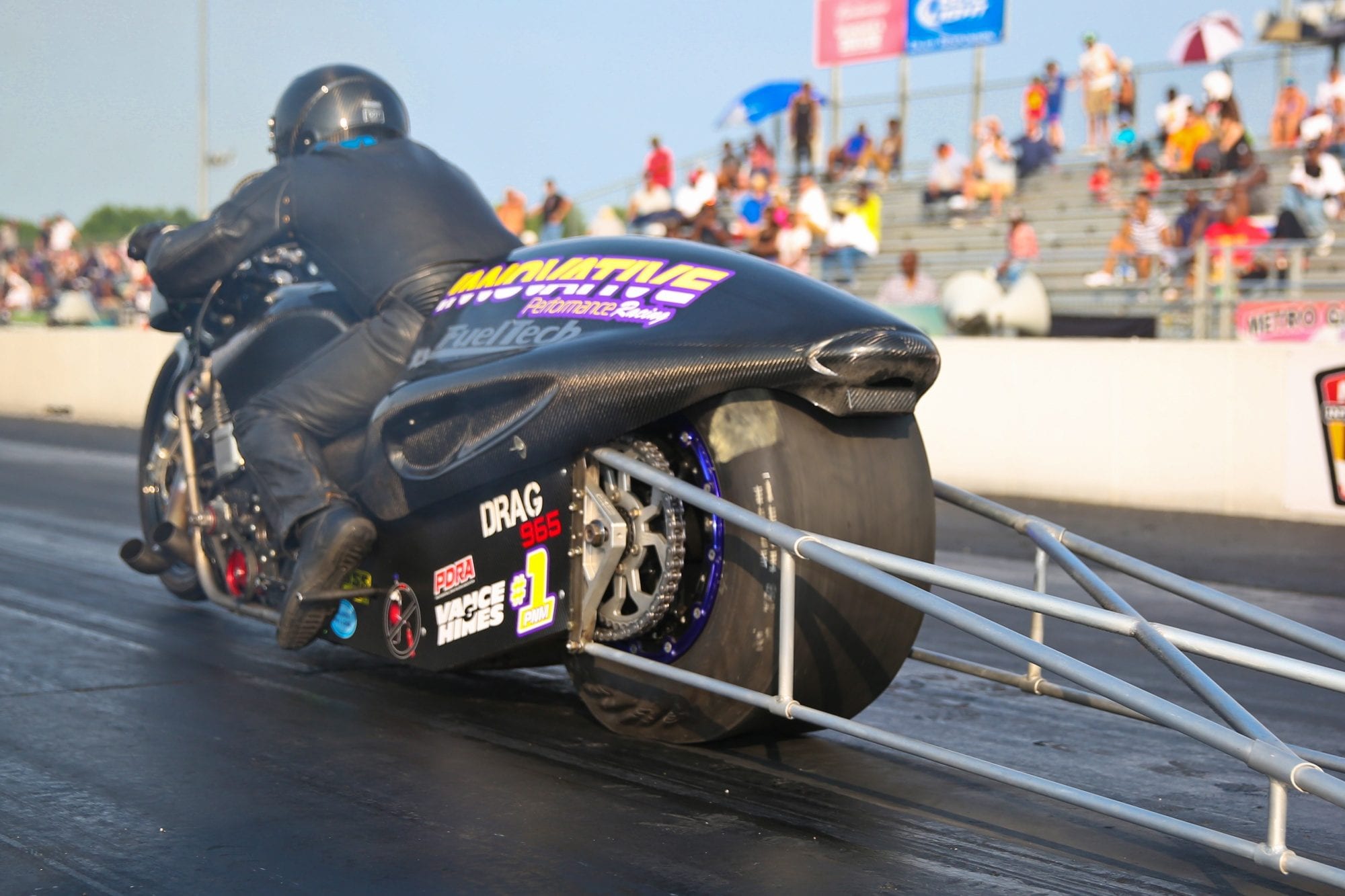 Defending world champion Ronnie “Pro Mod” Smith picked up his first win of the season, but his event victory was practically overshadowed by his record performance in the final round. Smith shattered the Pro Nitrous Motorcycle ET national record – his own 3.973 set at the 2018 North-South Shootout – with a 3.958 at 176.28, defeating Brunson Grothus and his 9-second pass in the final round.

“You don’t understand how big of a deal this is,” Smith said. “I owe a lot to my tuner (Shane Smith) and FuelTech. The round before the final, we ran a 3.97. We knew the weather would come to us, so we didn’t change much on the bike – we just sent it. When it went a 3.95, I couldn’t believe it myself. I looked up and almost fell of the bike.” 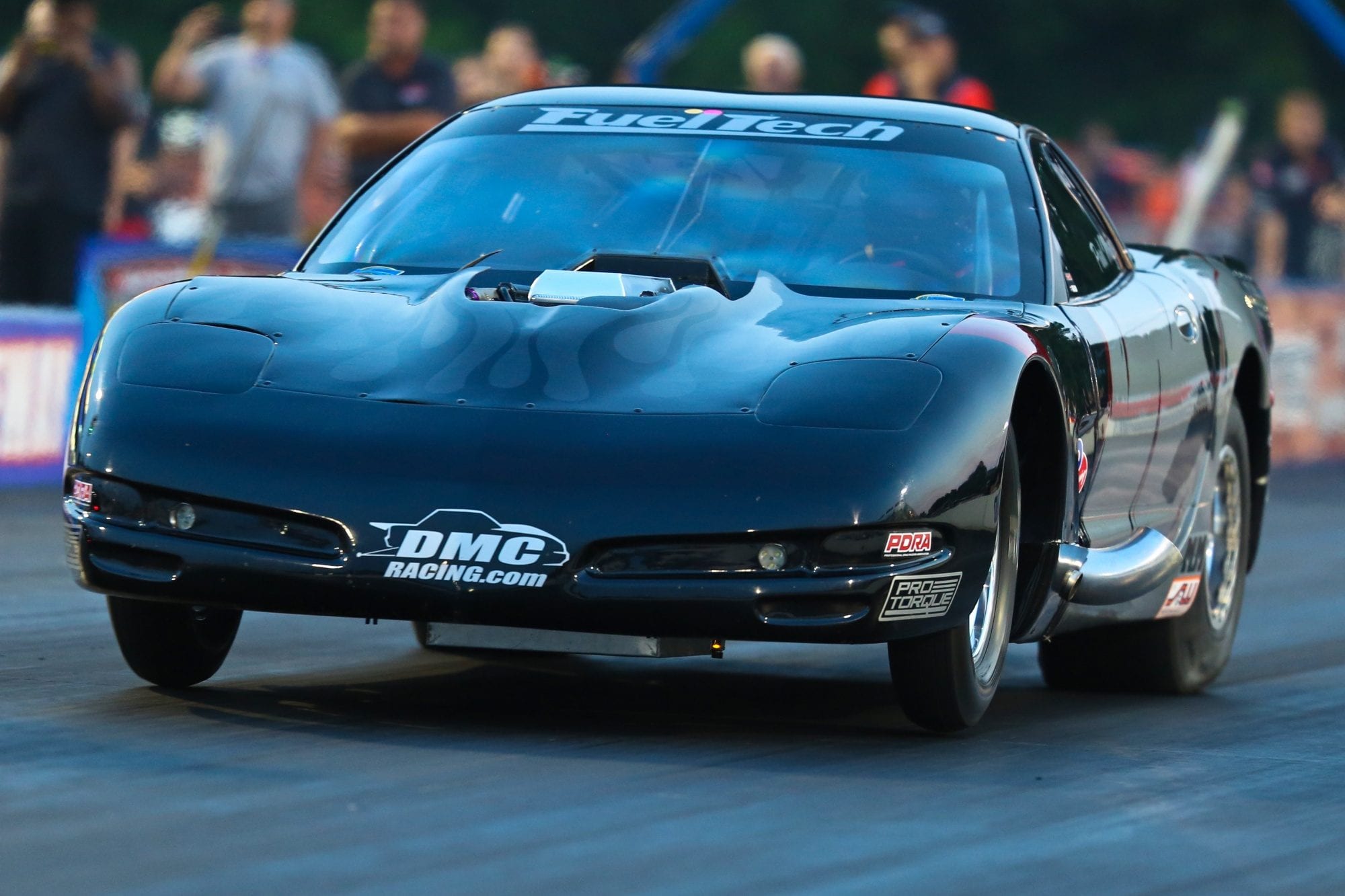 Major eliminated Joe Newsham and Steve Woolley before taking a semifinal single pass to the final round. Meanwhile, Quartuccio started eliminations with a single pass, followed by round wins over Joel Wensley and Jesse Lambert.

In a final round that showcased the intense competition in the PDRA’s sportsman classes, Scott Moore used a .002 reaction time and 4.075 on a 4.07 dial-in to eliminate fellow Virginia native Randy Perkinson and his 4.019 on a 4.01 dial-in. Moore drove his ’08 Mustang to round wins over 2017 world champion Dewayne Silance, Tim Molnar and John Prime before the final. Perkinson’s ’55 Chevy dispatched Ken Ellison, Bruce Thrift and defending world champion Donny Urban on his way to the final.

Just two weeks after Camrie Caruso earned her first NHRA regional event win in Top Alcohol Dragster, the 2018 Elite Top Dragster championship contender scored her first PDRA “660 Man” trophy at the North-South Shootout. She piloted the supercharged “Lola” dragster to a 3.823 on a 3.79 dial-in over Brian Bednar and his 3.726 on a 3.70 dial-in in the final round. Caruso eliminated 2018 championship runner-up Nick Hamilton, Kellan Farmer and William Brown III along the way to the final round. Bednar’s prior round wins came over Alan O’Brien, Angie Travis and Brian McHattie.

A superior reaction time allowed local racer Marty Martin to secure the Top Dragster 32 event win, as he went 4.862 on a 4.86 dial-in in his ’04 Racetech dragster in the final round next to fellow Maryland native Jason Kirby’s 4.552 on a 4.55 dial-in.

The next stop on the 2019 PDRA Tour is South Georgia Motorsports Park near Valdosta, Georgia, as the PDRA returns to South Georgia for the PDRA Summer Nationals presented by Lithium Pros Lithium Ion Batteries, June 27-29.