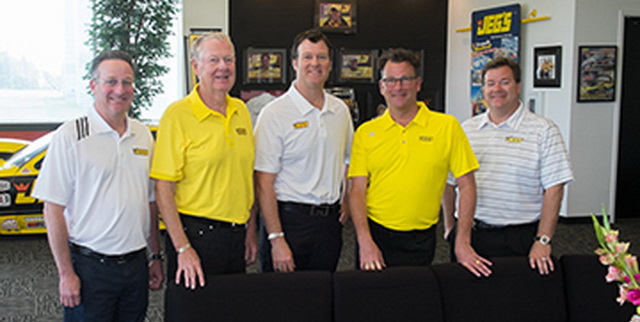 The Coughlin family and JEGS Automotive—driven by patriarch Jeg Coughlin Sr. and sons John, Troy, Mike, and Jeg Jr. (above)—are a family and group on the move. The JEGS Foundation recently announced a $10 million gift to support The Ohio State University’s Project One campaign. The pledge will forever name the new lobby space and research library of one of the most renowned cancer hospitals in the world.

The gift to The Ohio State University Comprehensive Cancer Center – Arthur G. James Cancer Hospital and Richard J. Solove Research Institute (OSUCCC – James) comes from the JEGS Foundation, the family foundation the Coughlins started a decade ago to steer the family’s successes from business and race winnings toward one goal: to end cancer. Since then, they have donated $15 million to the cause, including funding the Jeg Coughlin Chair in Cancer Research at OSUCCC – James, currently held by Maura Gillison, MD, PhD. 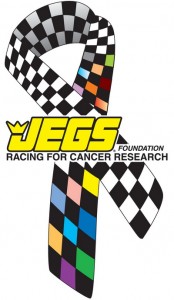 Fans are drawn to the family’s very public commitment to the cause, often sharing their own cancer stories. Says Jeg Coughlin Jr., “You don’t have to look too far to find someone who has been affected personally or has been a caregiver.” In fact, the family is so well known for supporting cancer research that rival race teams have occasionally matched the JEGS Foundation’s gifts to OSUCCC – James.

The affiliation with OSUCCC – James is a natural one, with Jeg Coughlin Sr. having started his business on Eleventh Avenue in Columbus, just down the road from Ohio State’s campus. John Coughlin likens the passion of cancer researchers at OSUCCC – James to the competitive world of racing. “Every time we meet a doctor at Ohio State, we’re struck by how everyone is so proud to be there and to make a difference. It’s just like a racing team. We’re proud to be faster, and at The James, they’re proud to save lives.”

To celebrate the Coughlins’ tremendous gift, the lobby of the new OSUCCC – James will be named in honor of the JEGS Foundation. In addition to the pizzazz of having a racing organization represented in a hospital lobby, Jeg Coughlin Sr. hopes that when people enter the new James Cancer Hospital, they will see the JEGS Foundation name and be inspired to give back. “Hopefully many will see what we did and ask, ‘What can we do to be a part of The James and cancer research, too?’” 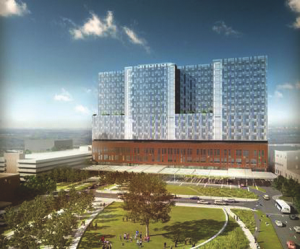 Indeed, the family’s commitment to cancer research has already spurred others to give, as well. Mike Coughlin, noting gifts others have made to The James in the family’s honor, says, “The longer we stay involved, the more people care about what we’re doing and become passionate about it. It just keeps growing.”

Just recently, Jeg Coughlin Jr. accepted a donation from an 11-year-old girl who lost her grandfather to cancer. The girl had held a fundraiser to fight cancer in his memory and donated the couple hundred dollars collected to The James. “I thanked her and told her I was very proud of her efforts to raise funds and to have that passion to want to give back,” says Jeg Coughlin Jr. “For her, that’s something that has been stimulated at a young age, and she has a whole lifetime in front of her to make a difference.”

Where does the foundation hope to be in another ten years? “Saving lives,” says Troy Coughlin, summing up the family’s goal.

Adds his brother, John, “Eventually, someday, there’s going to be a cure for cancer. And we’re going to be excited that we helped find it.”