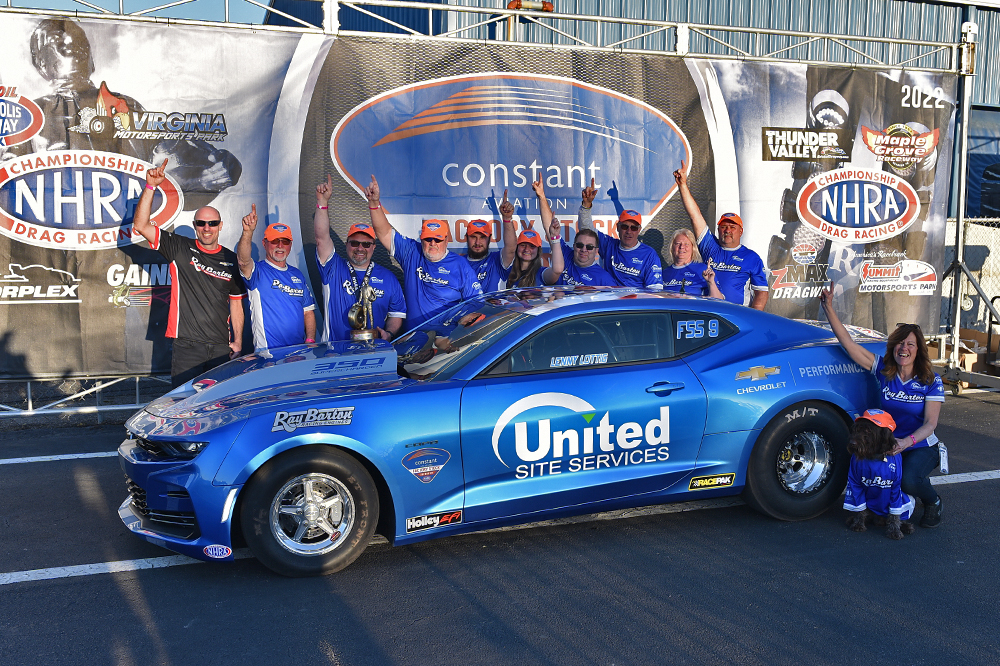 For the first time since its inception, Constant Aviation Factory Stock Showdown will be racing four-wide at this weekend’s Circle K NHRA Four-Wide Nationals at zMAX Dragway. A new level of competitiveness will be reached as Chevrolet COPO Camaros, Ford Cobra Jets and Dodge Challenger Drag Paks battle across four lanes at what is considered the Bellagio of drag strips just outside Charlotte, N.C.

Defending class champion Aaron Stanfield, who had a surprisingly early first-round exit at the season opening Gatornationals driving his Janac Bros. COPO Camaro, welcomes the four-wide challenge but has the advantage of having raced the format in Pro-Stock.

“I am looking forward to racing four-wide in Factory Stock. I have done it in Pro Stock, so I feel comfortable,” said Stanfield who qualified No. 1 and made it to the second round of eliminations in Pro Stock at the NHRA Four-Wide Nationals at the Strip at Las Vegas Motor Speedway. “You still have to pay attention since there is a lot going on at the starting line. It will be cool to see us all line up and take off for sure.”

The Circle K NHRA Four-Wide Nationals is just the second event on the eight-race schedule and the highly competitive class has already seen a first-time winner in Lenny Lottig who rallied his ITI Trailer & Truck Bodies 2020 Chevrolet Camaro to victory at the season opening Gatornationals.

“I don’t know if this team has come off the high cloud of winning the Gators. It still doesn’t seem real. I am hoping when I get the next one it seems more real,” Lottig said. “That is my new goal. I want to see what that second win feels like.”

Lottig anticipates the Factory Stock Showdown competitors will be quick to pick up the four-wide format.

“I have never raced anything four-wide. It is going to be pretty exciting; I think lanes two and three could be a little confusing at first. I know everybody will get the hang of it after a couple runs,” Lottig said. “If we can get eight wheels up coming off the starting line, I think that will just be a pretty good crowd pleaser. It will be a learning curve but no one in this class is a dummy. I think guys will pick it up pretty quickly.”

Drag racing veteran Mark Pawuk, driver of the Empaco Equipment Mopar Dodge Challenger Drag Pak for Don Schumacher Racing and No. 1 qualifier at the Gatornationals, is familiar with watching four-wide racing and knows how important strategy and team communication is with a chaotic starting line.

“You just have to make sure you aren’t late when you stage. If you are screwing around up there and the other three guys happen to pop ‘em in quick, you might get caught with your pants down. You have to be much more focused and pay attention to what’s going on. Instead of looking for two stage lights now you are looking for four. I’m going to make sure my crew reminds me of what lane I am in,” Pawuk said. “I am excited about it. I am hoping maybe my past experience in Pro Stock might give me a little edge, but we have guys like Aaron Stanfield who ran four-wide in Pro Stock just a couple weeks ago. It is going to be interesting, and I think it is cool for the class. It is going to be different for all of us that is for sure.”

With his first career win at the NHRA Gatornationals, Lottig has also put a target on his back worth $1,000 thanks to the Constant Aviation Factory Stock Showdown Bounty Program.

“Hopefully I can keep this streak going and save Constant Aviation some money on that bounty payout,” Lottig said. “I would like to keep winning and letting that bounty money stack up.”

The bounty on Lottig will increase until another driver defeats him during eliminations.

Qualifying for Constant Aviation Factory Stock Showdown at the Circle K NHRA Four-Wide Nationals will begin Friday with two sessions at 3:15 p.m. and 6:45 p.m. and continues Saturday with sessions at 12:15 p.m. and 3:45 p.m. Eliminations are set to begin Sunday at 1:15 p.m.