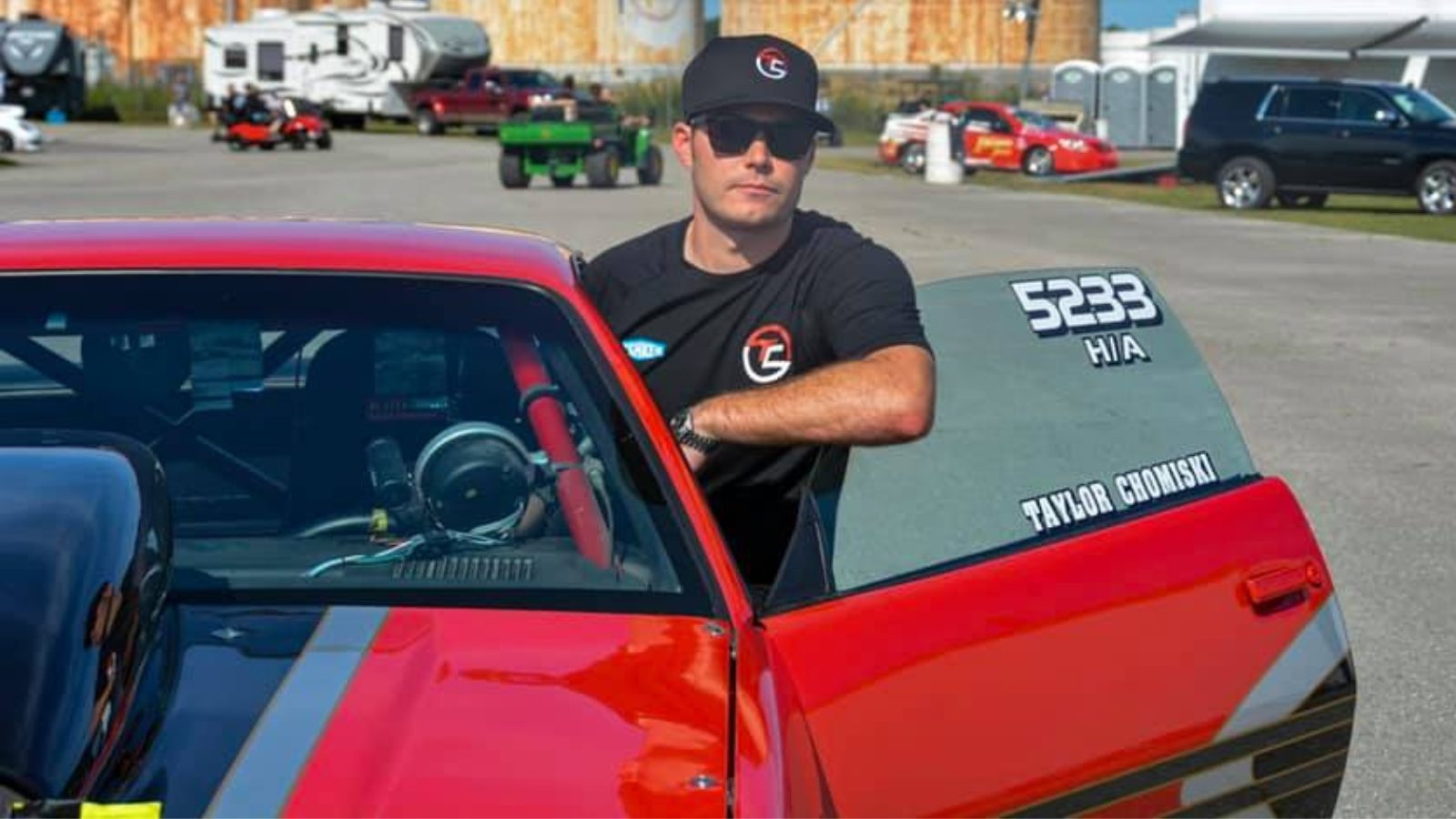 Everyone has a story, and the one being written by Dallas-based Taylor Chomiski is infused with drag racing history marked by a plethora of challenges and accomplishments. There is one chapter, however, that he would like to rewrite, and the second-generation racer will have the opportunity to do just that at this weekend’s NHRA FallNationals at Texas Motorplex.

Last season in Dallas, Taylor was the No. 1 qualifier in Comp Eliminator driving the notoriously quick Lee Sharp-owned 2008 Pontiac G5 for Elite Motorsports. After a statement of a win in the first round, Taylor was set up for a bye run in round two that should have taken him right to the semifinals.

“I was just going to hit the tree, leave the starting line, and go through a couple of gears – but they shut me off after the burnout,” recounted Taylor. “Because I took some index in the first round, my Pro Stock crew chiefs were determined they could get some more performance out of the car, and they wanted to try a few things during the bye run.”

But oil leaked from the overflow can as he was going through the burnout, and Taylor’s attempt at a run was disallowed. By NHRA rules, a driver only has to complete the staging process on a solo pass, but the mishap on the starting line immediately negated that option. He was not even permitted to stage and was turned away empty-handed.

“It’s an unfortunate stat to have, but I’m probably one of the only guys in history to lose on a bye run,” he said, with a shake of his head. “Fortunately for me, we had another race two weeks later, so it wasn’t long before I was back in the seat and could shake it off. But I’m definitely looking forward to a better outcome this weekend.”

Taylor will not be driving Sharp’s spunky little Pontiac this time around, though; he’ll be wheeling the same 1992 Camaro that his dad, Gary Chomiski, raced three decades ago.

Driving various cars, Gary has vast experience in Comp Eliminator that started with solid footing in the now-defunct Modified category. He owns an assortment of division trophies, reached his first final round in 1976 at Thunder Valley Dragways in Marion, S.D., and he was the NHRA Division 5 1981 Modified champion. Gary raced for many successful years and has also worked with various drivers, including Steve Schmidt, Matt Hartford, Alan Prusiensky, and more. Taylor was always along for the ride.

There is no doubt that it’s because of his father that 33-year-old Chomiski has a keen interest in drag racing. These days, father and son work in close proximity at NHRA national events under the Elite Motorsports Pro Stock awnings: Taylor is part of Bo Butner’s crew working on the Johnson’s Horsepowered Garage Chevrolet Camaro, and Gary wears the colors of Cuadra Racing.

This weekend, Taylor will be pulling double-duty as he races Comp and performs his normal duties on Butner’s Pro Stocker as the JHG team chases victory.

Originally, Taylor had planned to race his own car in Dallas, a Chevrolet that had been built in 1999 for a former Pro Stock Truck racer, but after hurting the engine at the St. Louis division race last weekend, he is grateful to have the opportunity to drive a car with which he is quite familiar by the gracious allowance of the current owner.

Although he longs for – and intends to establish – consistency in his own car in the competitive category, Taylor has shown that he’s pre-loaded with a certain comfort level no matter what drives. In 2020, his first season behind the wheel, he went to Virginia Motorsports Park [VMP] for a double division race and caught a glimpse of what the future could hold. That time, he was driving a Pro Stock-style 2019 Dodge Dart.

“We qualified No. 5 and beat Randy Daniels in the final at the first race, then we turned around Saturday for the second race, qualified No. 5, and went to the finals again,” recalled Taylor. “I was pretty nervous trying to double up just 36 hours after my first win, and I was a little late and lost the final. But I’m 9-1 in the state of Virginia, so that’s a pretty special place for me. I’d like to go back and try it again.”

Taylor is currently focused on writing a new and improved story at Texas Motorplex, one to rival the pages written in his first year at that race at VMP. His hope is that this new chapter will include success for the JHG Pro Stock team as well as a long stretch of quick and effective passes in Comp at one of the most favored facilities on the NHRA tour.

“I feel lucky for many reasons,” said Taylor. “Being able to drive this car that my dad drove years ago, racing with my dad and how hard he works for this, having the opportunity to work with Bo and the team, their support of my own racing.

“This is a hard class, but I hope to do well in Dallas. I would love to turn on some win lights and build the self-confidence back up, and it sure helps having a great group of people around me supporting me.”