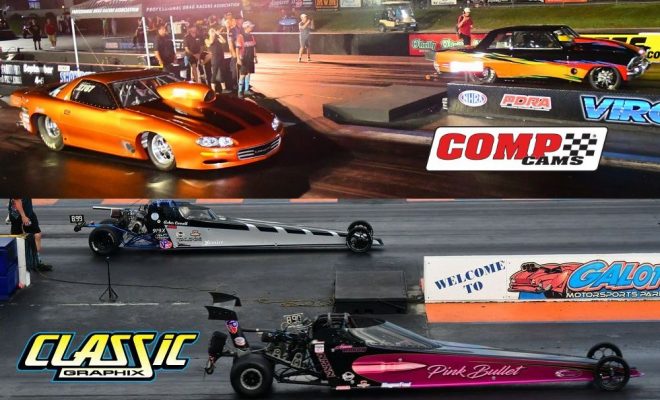 As the Professional Drag Racers Association (PDRA) prepares to embark on its eighth season, the series announced today two new class sponsors. COMP Cams has signed on as the presenting sponsor of Edelbrock Bracket Bash, while Classic Graphix is the new title sponsor of Top Jr. Dragster.

“It’s always exciting when we can start the season with new supporters,” said Will Smith, marketing director, PDRA. “COMP Cams is a brand-new supporter of the series, while Classic Graphix has been involved since the beginning of the PDRA as our official apparel provider and sponsor of various programs. We’re proud to have these companies join our list of class sponsors.”

“Our Bracket Bash competitors have benefited from the support of Edelbrock since 2017,” said Tyler Crossnoe, race director, PDRA. “So we couldn’t be more excited to welcome Edelbrock’s sister company, COMP Cams, into the series and the Bracket Bash class this season. COMP Cams offers the products our bracket racers need to build consistent, reliable engines. It’s a perfect fit for the class.”

“Scott Bathurst and his team at Classic Graphix have been valued partners of the series since its inception in 2014,” Smith said. “Scott believes in supporting the next generation of drag racers. That’s evident through the Classic Graphix low qualifier award, which rewards the Pro Jr. Dragster and Top Jr. Dragster No. 1 qualifiers with $100 at each race, as well as through Classic’s title sponsorship of the Top Jr. Dragster class.”

The 2021 PDRA season will begin April 8-10 at the East Coast Nationals presented by FuelTech at GALOT Motorsports Park in Benson, N.C.