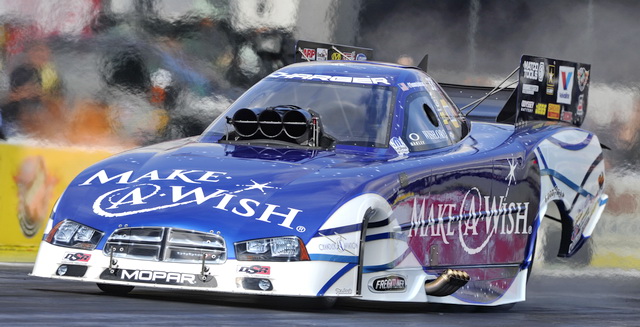 Don Schumacher Racing’s Make-A-Wish Dodge Charger R/T Funny Car team will have a distinct Iowa flavor when it arrives at Gainesville, Fla., next week for the NHRA Gatornationals.

John Collins, in his seventh season with DSR and fifth as an assistant crew chief to Rahn Tobler, has been promoted to crew chief for the Make-A-Wish team with driver Tommy Johnson Jr.

“I sold my (auto repair) shop in 2000 to move here for the opportunity to succeed,” Collins said. “And DSR is the organization where you can succeed.”

Collins has worked with Tobler the past five seasons, including the last two as the assistant crew chief on the NAPA AUTO PARTS Dodge team.

“John is one of the most intelligent, creative people we have in our shop,” said DSR owner Don Schumacher, whose teams have won 220 NHRA event titles and 11 world championships. “Rahn and I both have believed that John has been ready to step up to crew chief for a couple years, and this is the right time for him.

“I’m excited for John and our Make-A-Wish team. They’ve already done a great job this year but they need to have one leader who will be with them 100 percent of the time.”

Replacing Collins on the NAPA team will be Eric Lane, who has been with John Force Racing since 2001. Lane most recently was the assistant crew chief on the Top Fuel dragster driven by Brittany Force, who advanced to her first Top Fuel championship round on Feb. 23 near Phoenix where she lost to DSR’s Antron Brown and the Matco Tools team.

“We wouldn’t have been able to promote John to the Make-A-Wish car unless I could get Eric,” Tobler said. “I needed a good, experienced crew chief to come in here and help me. Eric can give me input into how to improve the car. I know Eric on a personal level and he’ll come here and fit in well with our team. He won’t be a John Collins right away but he has the potential to be one.”

Lane, 40, is a native of Baldwin Park, Calif., and currently lives with his family in Avon, Ind. He graduated from Mt. San Antonio College and Universal Technical Institute before working for three years on Gary Densham’s Funny Car team.

The ties between Collins, 51, and Johnson, 45, are long. They are natives of Ottumwa, Iowa, and Collins’ wife Kelly graduated with Johnson in the same class from Ottumwa High School. In 1999, Collins helped on Johnson’s family-owned Top Fuel dragster.

Collins lives in Plainfield, Ind., and Johnson in nearby Avon.

“I’m very proud of what John has accomplished, and we all think he’s ready,” Tobler said. “I’ve told him when he’s ready I wouldn’t hold him back from doing what he’s always wanted to do,” Tobler said. “This is why he moved here from Iowa. He sold a successful body shop and repair shop to move here with his wife and two kids 14 years ago because he wanted to be a drag racer.”

“We’ve basically been running that car for the last two race weekends, and that car ran very well with the structure of how we do things,” Tobler said.

Despite competing at the first two events without a full-time crew chief, Johnson advanced to the semifinals last weekend near Phoenix and is ranked fourth in points heading to Florida next week for the Gatornationals.

Collins’ first full-time job on a Top Fuel team was in 2000 when he worked on Joe Gibbs Racing’s dragster driven by Cory McClenathan. Collins joined Don Prudhomme Racing the following year and was reunited with Johnson on Prudhomme’s Skoal Funny Car. In 2003, Collins was moved to Prudhomme’s Top Fuel dragster driven by Larry Dixon and the team won the NHRA world championship that year.