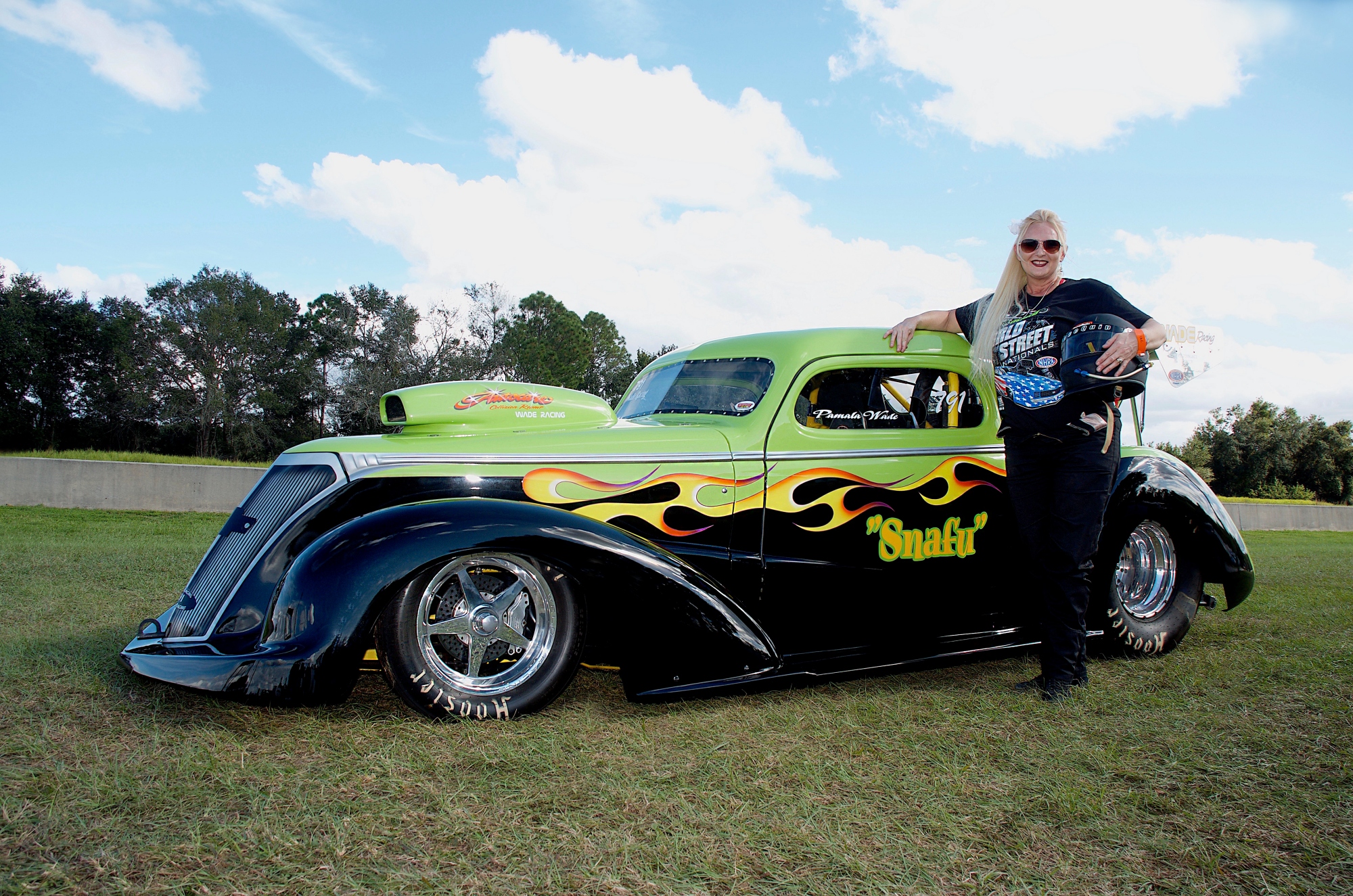 Pamala Wade is a woman with extremely varying interests. On one hand, she’s cultivated a lifelong passion for dirt-slinging oval cars, while at the same time entering and winning multiple beauty contests!

Most of her adult life has been spent in Florida, where she won the Miss Shrimp Festival in 1986 during her high school years, followed by a 1st place trophy in the Miss Nassua County contest. Later, she was a finalist in the Miss Florida competition. And while she regrets never getting the opportunity to race a dirt track entry, she nevertheless enjoys burning up the drag strip every chance she gets.

Wade’s love affair with cars began with a street-driven 1973 Firebird she owned in high school. While she admits to participating in an obscene amount of street races with the car, it would actually be much later in life before this mother of five children buckled herself into a drag car and took a tree at the drag strip. “First track I ever visited was Gainesville back in 1992,” she remembers. “I went there to watch and crew for my husband, David, who raced a 1971 Opel GT.”

One of their children was a newborn at the time and Pamala would tend to the baby while also checking tire pressure and assisting David on the starting line. It would be another 22 years before she herself experienced the thrill of bumping into the beams while driving her 1984 Super Comp Corvette at Florida’s Green Cove Dragway. “I had a good teacher in David, but man, I took some lashing from him in the beginning!” she laughs.

Wade later realized she was better suited to drive the Chevy Vega they owned, only because the trans-brake button was on the left-hand side. “I had a bad habit of not releasing it in the Corvette,” she admits.

Green Cove had a Top 10 list similar to that of Street Outlaws and Wade began climbing the ladder. “I started out in the No. 10 spot while grudge racing the Vega and ran it all the way up to the No. 3 position. We just didn’t have enough horsepower to push through to the top.”

That would change when she moved up to a Top Sportsman 1964 Corvette. She was challenging for the No. 1 spot when a fire sidelined her efforts. The car was repaired, but an even greater tragedy was lurking late one night at Gainesville. The Wades were there testing one evening and Pamala had already put her race car in the trailer, but her youngest son, Austin, encouraged her to get the car out and make one more pass alongside him in the Vega. She reluctantly agreed and rolled to the starting line to square off against her 17-year-old.

The tree flashed green and the two were thundering down track with Pamala out in front. At about 300 feet the car broke loose and shot across the track and bounced off the wall in front of her son. “When the car came around, I’m suddenly staring Austin right in the face,” she remembers. It was a scary ordeal, but all involved walked away. The road to repairing her Corvette was never in question. “That car is my baby,” she declares.

In the meantime, she’s been bonding with another hot rod in their stable, a 1937 Chevy Coupe, built by Blackstone Race Cars in Boise, Idaho. The car is motivated by a naturally aspirated 632 with Big Chief heads, and Wade has been in the 4.90s at over 141 mph in it. “She’s a good driving car,” she remarks of the coupe.

In addition to being a grudge race fanatic, Wade relishes a variety of venues, including Gainesville’s Outlaw Big Tire Shootout, Bradenton’s Snowbird Nationals, as well as Orlando’s World Street Nationals. “I like to hurt feelings and smack their pocketbook!” she giggles as she describes her grudge racing endeavors.

Back home in Palatka, Florida, the ladies at the accounting office where she works routinely come out to observe Wade in her racing element. Somehow, she’s even managed to maintain her role as cheerleading coach for 20 years while also earning a fourth-degree black belt in karate. “I like to multitask,” she reveals.

As for the opportunities she’s enjoyed in racing, Wade is quick to heap praise on her family. “I wouldn’t be out here doing this if not for David and the team that backs me up!”