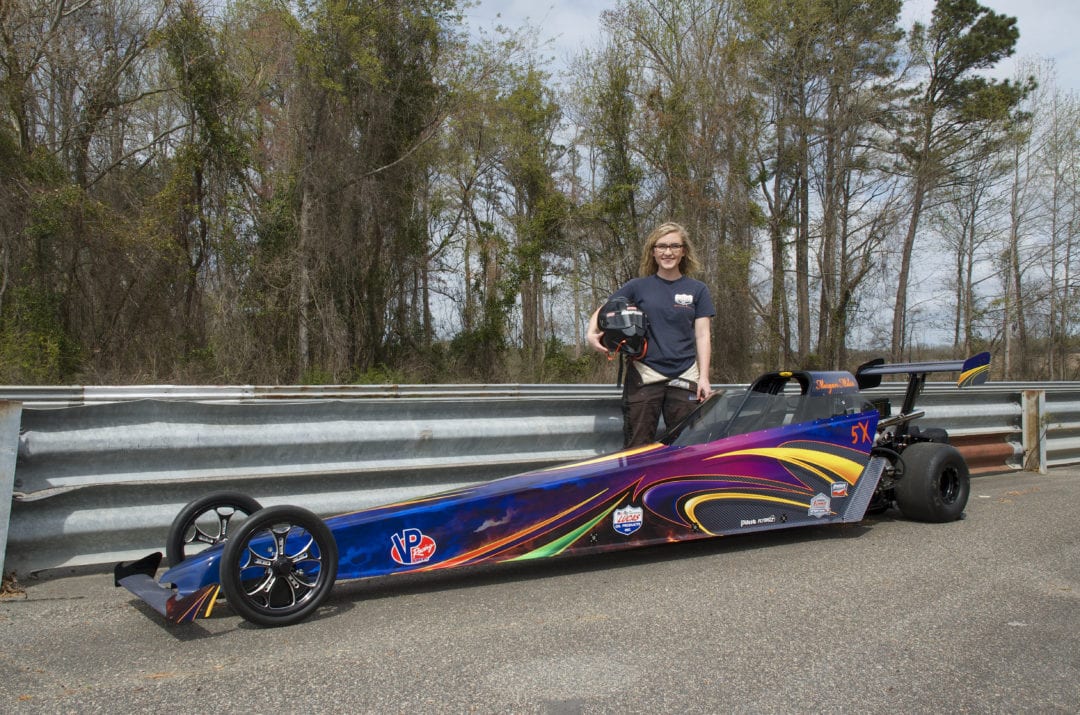 If anyone was destined to race cars based solely upon their upbringing, Morgan Miles definitely fits the description of someone whose life was directly impacted by her drag racing roots. The 17-year-old Jackson, South Carolina native not only comes from a long line of dedicated gearheads, her family even owns their own drag strip!

Morgan’s late grandfather, Jeff Miles Sr., purchased Carolina Dragway back in 1985, and it’s been in the family ever since. Morgan’s father, Jeff Miles Jr., and her aunt Angel jointly own, operate and even utilize the track themselves for their own racing endeavors. The drag racing bug was eventually passed down to the third generation, which numbers numerous grandchildren, including Morgan.

The Miles family reside just minutes from the popular track that has been such a big part of their lives, and by the time Morgan turned 7 years old she was already making some practice laps in her first Junior Dragster, receiving her IHRA competition license the following year. She won a few rounds during her inaugural season, but ultimately it served as a grand introduction to the sport for the 8-year-old, while her father coached her every step of the way and carefully advanced her levels as she gained experience. “One thing that made it difficult in the beginning was the fact that her car was very slow,” Jeff recalled. “It’s hard to make a car that slow run consistent, but we were mainly trying to get her adapted to the car first.”

To Morgan’s credit, she did earn a spot on the Bracket Finals team her very first year of competition. She progressed nicely throughout her teenage years, placing second in points at Carolina Dragway on two different occasions, while also placing second last year in IHRA Division 9, and finishing 5th in points nationally. As her Junior Dragster career is quickly winding down, she still enjoys her half-scale involvement while also making some test hits behind the wheel of her Chevy S-10 truck, which will be her next vehicle of competition when she makes the transition at the conclusion of the 2018 season. Morgan is making serious strides toward crafting her technique while behind the wheel of a full-size race vehicle. “The biggest difference between the two is realizing how many little steps you’ve got to remember to do while driving the truck, as opposed to my Junior Dragster where you just get in and go,” Miles said.

As always, her father is pleased with her progress. “She was cutting some consistent .020 lights on the tree and then begin to tighten it up and cut some .00’s,” Jeff added. While her dad is likely her biggest fan, he’s also the person that Morgan might most like to beat at the track. “I’ve lined up beside him before, but I didn’t win. I’m looking forward to when I do, though!” she laughed.

For Morgan and her close-knit racing family, the competition only brings them closer together. It’s also the adrenaline rush of fast driving that keeps her coming back time and time again. The young lady has made it clear that it’s her desire to have a long career behind the wheel. “I don’t think a whole lot about what level I want to reach in drag racing, just as long as I keep having fun and I can just continue being able to do it,” she smiled.

This feature originally appeared in DRAG ILLUSTRATED Issue No. 122, the Sportsman Issue, in June of 2017.