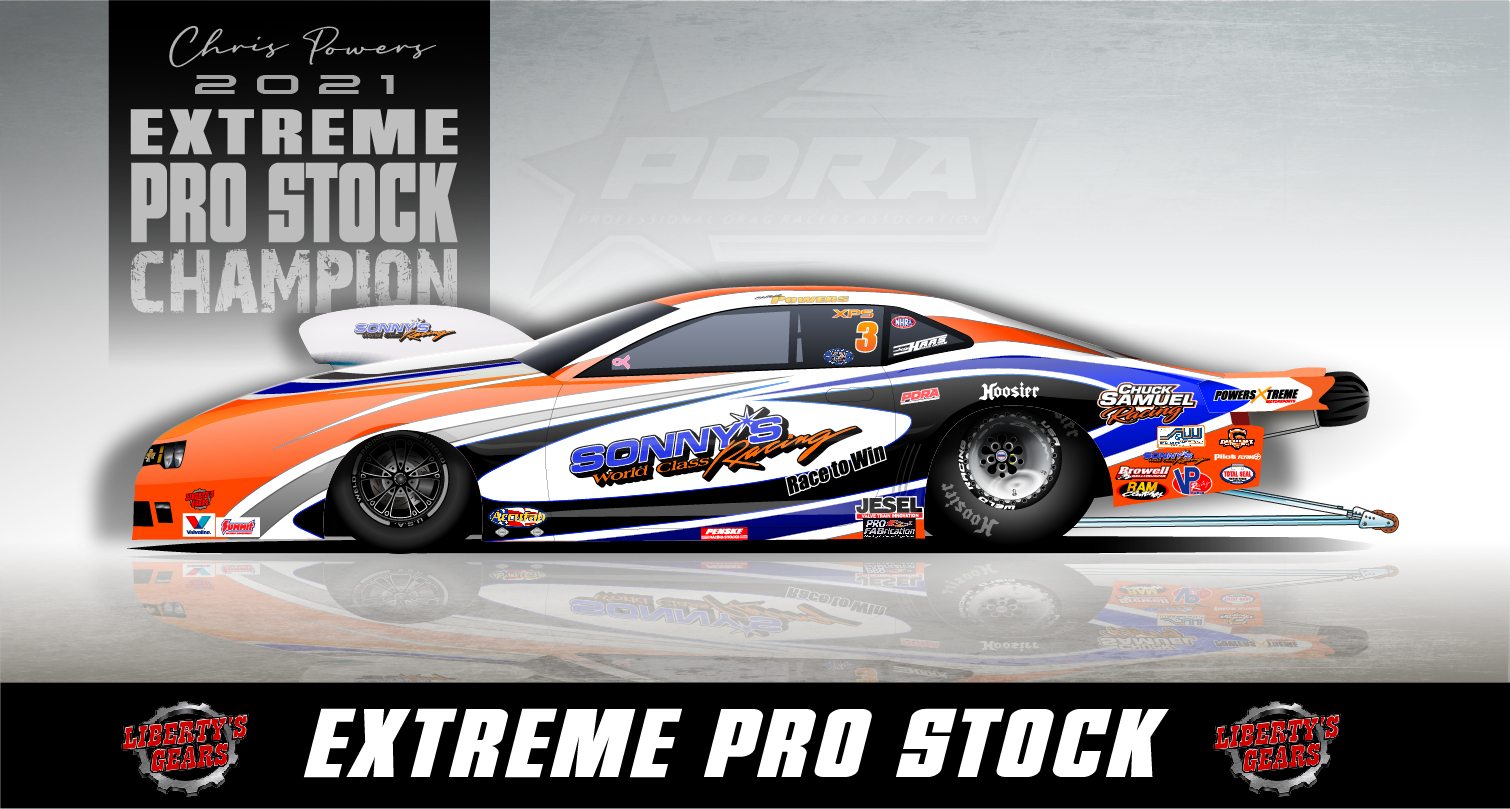 When legendary engine builder Sonny Leonard passed away in January, Chris Powers knew he had to go out and give his best performance yet in the 2021 Professional Drag Racers Association (PDRA) season. Powers, a friend and customer of Leonard’s, went on to win two races in five final-round appearances on his way to claiming his first Liberty’s Gears Extreme Pro Stock presented by AED Competition world championship.

“We wanted to let the world know that Sonny’s Racing Engines is here to stay,” said Powers, who made his Extreme Pro Stock debut in 2017. “Everybody at Sonny’s stepped up: his daughter, Kelly [Ward], his wife, Francis, and his son-in-law, Jr. [Ward]. It means a lot to them and to us to be able to give Sonny’s this championship. For my entire team – Rob Bealko and Chuck Samuel and my daughters and my wife and son – it means the world to us to be able to accomplish something at such a high level like this.”

With Sonny’s World Class Racing Engines branding placed prominently on his ’14 Camaro, Powers started the season with an emotional win at the East Coast Nationals presented by FuelTech. His final-round opponent was unable to make the call for the round, so Powers took the tree and idled down the GALOT Motorsports Park eighth mile while the announcer listed off Leonard’s accomplishments. It was a fitting tribute, and it set the stage for the rest of the season.

Powers added a runner-up finish at the inaugural DeCerbo Construction American Doorslammer Challenge presented by Callies at Summit Motorsports Park, a win at the North vs. South Shootout presented by Line-X at Maryland International Raceway, and another runner-up effort at the P2 Contracting Northern Nationals presented by P2 Racing at his home track, Maple Grove Raceway.

The late-round finishes gave Powers a solid points lead going into the penultimate race of the season, Proline Racing DragWars presented by Modern Racing at GALOT. But a first-round exit softened his lead over JR Carr, who took runner-up honors.

Powers and Carr were locked in a tight battle for the championship at the Brian Olson Memorial World Finals presented by ProCharger, while 2020 world champion Johnny Pluchino was also mathematically eligible. Pluchino defeated Carr in the second round, then Powers beat Pluchino in the semifinals before falling to John DeFlorian in the final round.

“I knew I just needed to stay focused,” Powers said. “I knew we had a good car, good equipment and good guys around me. It was a little nerve-racking in round one because you had no idea what was going to transpire. Once we got through there, the nerves kind of settled down and I knew we were on our way by then.”

Powers and his Chuck Samuel-led team won’t rest now that they have the championship in hand. The Pennsylvania businessman plans to continue improving his program to chase more major goals in 2022, including winning another championship and becoming the first Mountain Motor Pro Stock driver to dip into the elusive 3-second zone in competition.

“We’re definitely going to work harder,” said Powers, who thanked Sonny’s Racing Engines and ATI Performance. “We have a brand-new car, so we’re going to test a lot in Florida with that and try to get it up to speed with this car. We’re hoping the aero package of that car will be a little faster than this one. We’re still working on the engine department, trying to find more horsepower. We’re definitely on an even playing field. There’s four or five cars that definitely have enough smoke to go in the 3s and I know we’re one of them.”

The PDRA will celebrate Powers and its other 2021 world champions at the annual PDRA Awards Banquet on Friday, Dec. 10 at the Indianapolis Marriott Downtown.