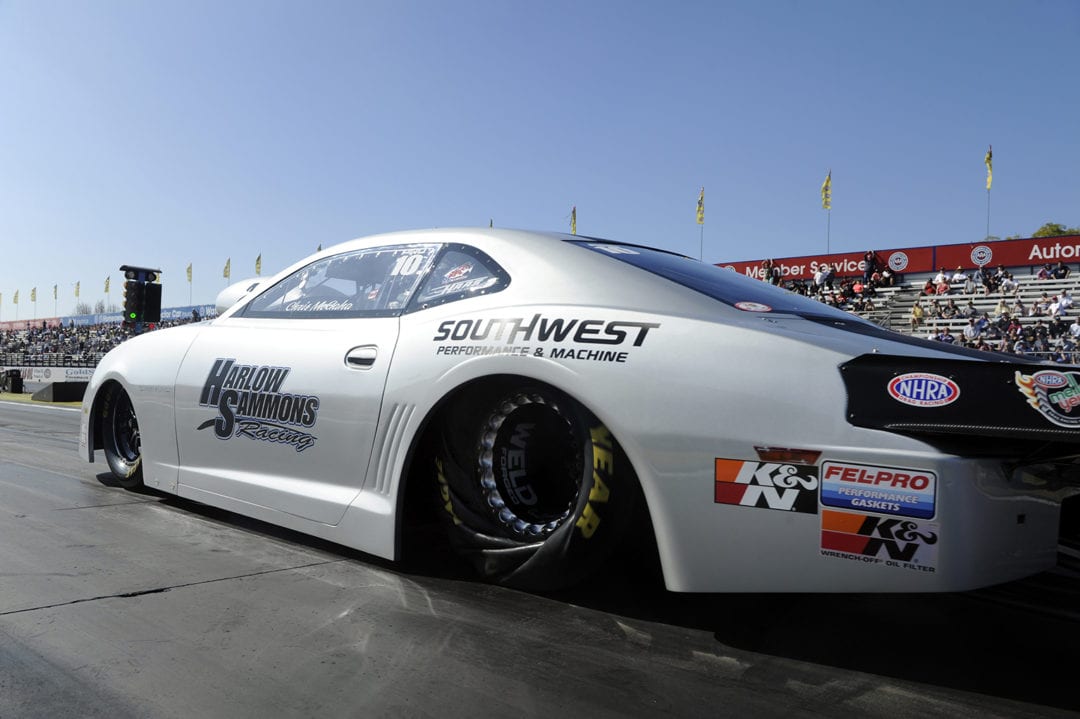 NHRA Pro Stock driver Chris McGaha is coming home to Texas this weekend for the 28th annual O’Reilly Auto Parts NHRA SpringNationals at Houston’s Royal Purple Raceway. McGaha, a native of Odessa, Texas, relishes the opportunity to bring his ever-improving program back to the Lone Star State for what he hopes will be his best performance to date.

And why not? The fourth-year competitor will arrive in Houston with one of the hottest cars on the NHRA Mello Yello Drag Racing Series tour, and when he unloads the silver Harlow Sammons Racing Chevrolet Camaro, the former sportsman competitor will do so with the knowledge that he has every capability of finally scoring his first NHRA Pro Stock win.

So far this season, McGaha has been the No. 1 qualifier twice – at back-to-back races in Gainesville and Charlotte. Currently No. 5 in the Pro Stock standings, he has been one to watch in his bid for power and speed. The amiable Texan and owner of Southwest Performance & Machine paid his dues as a sportsman racer, competing in NHRA’s Competition Eliminator category en route to making his Pro Stock debut in 2011 and catapulting to the semifinals on Sunday five times. With a heart the size of Texas, McGaha is eager to make his best impression yet in his home state.

“The first time we ever raced in Houston was in the early 1990s,” recalled the second-generation drag racer, whose father, Lester McGaha, was also a Comp racer and now works with him side-by-side on the family’s Pro Stock program. “We’re very familiar with that racetrack and have a lot of memories there, and for my crew chief, this is really a lot like home, too.”

McGaha is tuned by Brian “Lump” Self, a noted Comp racer in his own right who is originally from Oklahoma but spent many years racing in Texas. McGaha and Self raced against one another for years before McGaha asked him to join him in the Pro Stock ranks as a crew chief.

“The very last round of Comp I ever raced was the final round at a division race in Houston in 2011,” recalled McGaha. He didn’t win the round, but it sticks in his mind.

“We should have won it. That goes through my mind a lot. We had the car to win – just like we did in Gainesville earlier this year – but we just couldn’t get it done. I feel like that is almost the same situation we’ve been in lately, we have the car to win, we just haven’t been able to get it done yet. To get it done in Texas, our home state, would really mean a lot to us.