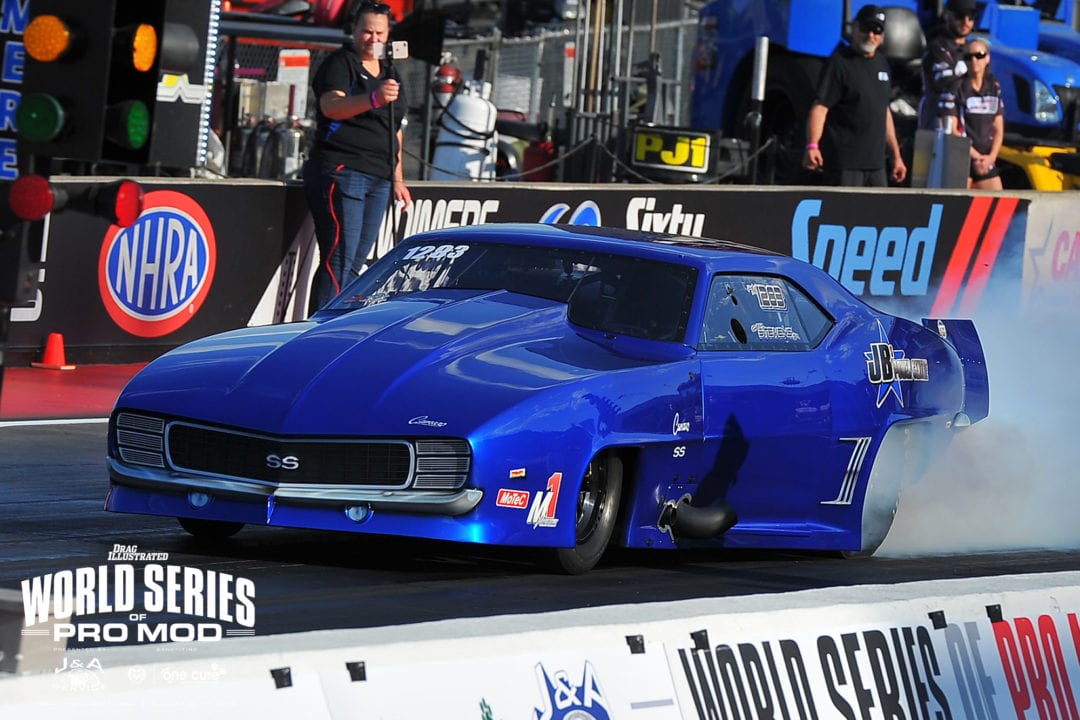 Carl Stevens Jr. knew he needed something to build on heading into Saturday’s eliminations for the DRAG ILLUSTRATED World Series of Pro Mod at Bandimere Speedway.

After running well during testing in the Jim Bell-owned turbo ’69 Camaro, the first two Summit Racing Shakedown Runs on Friday yielded nothing but frustration after the team made a big swing heading into the day.

But Stevens got the good news he needed to close out the night, making a thoroughly impressive run down the right lane to close out his night. It puts the team in a solid spot heading into raceday, giving the team a boost of confidence as well.

“We had to get one good one (Friday),” Stevens said. “We ran good in testing, but we were struggling today. We made a converter change and got a little greedy. We had to take a step back and get back to where we were at in testing.”

Going back to what worked earlier in the week proved to be the necessary adjustment, giving the team back its mojo it had during testing.

He’ll have to repeat – and perhaps even top – that run during the first round of eliminations on Saturday, as Stevens will face off with Marc Caruso, who has been one of the most consistent drivers of the event through testing and the shakedown runs.

“We’ve been able to run well in the middle of the day, so hopefully that gives us a good baseline for (Saturday),” Stevens said. “You’re just trying to put together good A to B runs and hope it’s enough.”

Another notch in Stevens’ belt is the car has performed strong recently, as Bell drove well last weekend in St. Louis.

The conditions are far different at Bandimere Speedway, but it’s been a welcome first trip to Thunder Mountain for Stevens.

He watched the inaugural World Series of Pro Mod a year ago, hopeful he would get an invite to the 2018 race. That happened and now Stevens is aiming to make the most out of what has already been a memorable weekend. He spoke highly of not only the facility, but also the event, which has put the Pro Mod class in the spotlight and is on the verge of delivering a thrilling show for a second straight year.

Now, Stevens just hopes to be the one doing the entertaining well into the night on Saturday and collecting a six-figure paycheck in the process.

“This is a really bad ass facility,” Stevens said. “I just like everything about it. How can you not be pumped to run for $100,000? Based on our performance I’m confident in what we have and I feel like we’ve been doing a good job. We’re just going to keep running as best as we possibly can and hope it’s enough.”