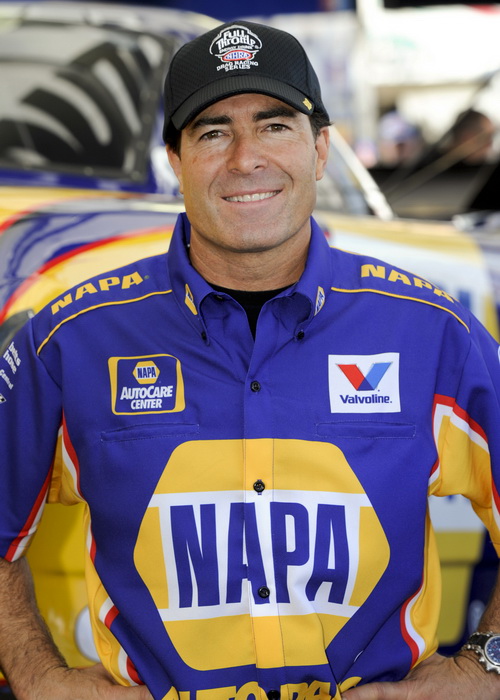 Ron Capps has a busy week ahead and vows he’ll love every minute as the off-season for the NHRA Mello Yello Drag Racing Series winds down.

He has been looking forward to an annual cross-country trip from his home near San Diego to Portland, Maine, where he will spend a couple days at NAPA AUTO PARTS appearances before flying to Atlantic City on Friday to help NAPA host the NAPA Atlantic City Indoor Race for TQ Midgets on Feb. 1-2 at the fabled Boardwalk Hall.

It will be very understandable, however, for his mind to drift to Sunday night when he heads to New Orleans for more fun than any Mardi Gras could provide.

Ron is a lifelong San Francisco 49ers fan and will be at the big game, but not in a grandstand seat or a luxury suite. The only ones at the game with a better view of the action will be players and game officials.

The driver of Don Schumacher Racing’s NAPA AUTO PARTS Dodge Charger R/T Funny Car will be working on the sidelines handling a satellite-dish looking parabolic microphone for San Francisco radio station KNBR, the flagship station for the 49ers and San Francisco Giants. Ron’s chances to be part of the working media resulted from a friendship he has with Mike Hohler of the station.

“First of all, just the Niners being in the Super Bowl is huge,” Ron said. “To go to my first Super Bowl and be able to work on the sideline is going to be unbelieveable. I’ve been watching Super Bowl coverage this week and highlights from other Super Bowls show how the sidelines are packed with media, movie stars and athletes. It will be fun working at the game and being that close to the action.

“It can’t get any better than this.”

Ron will fly from Atlantic City Sunday morning and go directly to the Superdome and begin preparing for the game. He was able to borrow a friend’s time-share apartment in New Orleans for Sunday night before returning home.

It will be the second time the winner of five NHRA Funny Car titles last season will have his ears glued to the action.
The day after he won the Funny Car title at Las Vegas last October he debuted as a microphone holder when the 49ers beat Arizona 24-3 near Phoenix in a Monday Night Football game.

Other than the best place to watch a game, he said handling a parabolic microphone requires you to wear headphones.

“That was so cool to hear all the chatter and smack talk going on with the players. It’s pretty wild.

If you think it’s dangerous driving a Funny Car at 320 mph, Ron said working the sidelines of an NFL game might be riskier and you don’t wear a helmet.

“When players would go out of bounds you could see me (on TV) holding the microphone, and I’d started getting into it. When guys would come toward me trying to make a tackle I found myself running to get closer to the action, almost risking myself at times, just to get that good sound.

“I really got into the job and tried to be the best microphone holder they ever had.
After the game I started to wonder what I was doing.”

He promises that when the 49ers score or if they win the Super Bowl, he will remain a committed, professional microphone technician.

“If the Niners win, I promise I won’t throw it. Mike and the guys at KNBR put a lot of trust in me, and I take this very seriously.

“But I might have to pay for a new one if I get too caught up in celebrating.”