Canadian Pro Stock driver Mark Martino, who expects to make his 2013 debut at the Amalie Oil NHRA Gatornationals, will again be supplied with power from Cagnazzi Racing for the 2013 NHRA Mello Yello Drag Racing Series season. Martino will be driving his GXP Pro Stock entry supported by Charter Communications. 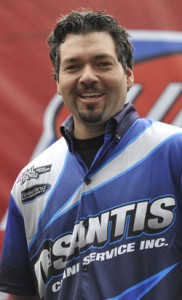 “I’m so excited for the 2013 season to get under way,” said Martino, who headlined the Canadian Motorsports Expo Feb. 8-10 in Toronto. “To work with Victor Cagnazzi again this season, knowing what he was able to accomplish with Erica Enders and Dave Connolly last season, is outstanding. I’m confident that we will have a competitive car in qualifying and be a contender on race days.”

Martino, son of Tony Martino, is a second-generation drag racer entering his fourth season in the NHRA. He made his Pro Stock driving debut at the 2010 Lucas Oil NHRA Nationals at Brainerd Int’l Raceway.

He ran a limited schedule during the 2012 season; he qualified at all five races and made it to the quarterfinals at the Lucas Oil NHRA Nationals. He hopes to run the majority of the 2013 NHRA Mello Yello season and has hired Forward Sports Marketing to work on sponsor promotions for his team.

In addition to expanding his race operation, Martino is still heavily involved in his family business, DeSantis Crane Service in Stoney Creek, Ont.