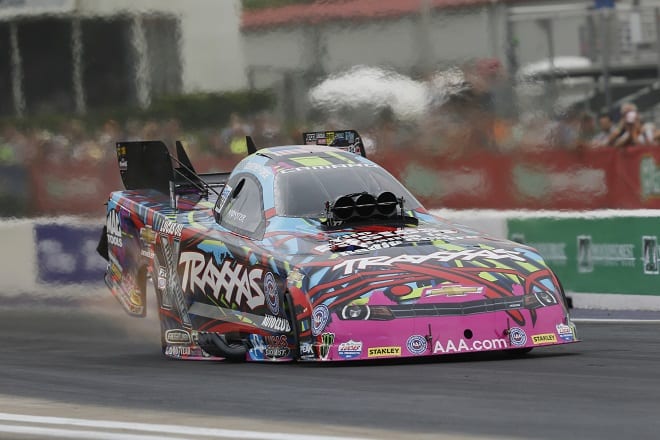 Courtney Force raced to her first Funny Car victory of the season Sunday at the NHRA SpringNationals at Royal Purple Raceway. It is the fifth consecutive NHRA Mello Yello Drag Racing Series event that has featured a female winner.

Force posted a 3.913-second pass at 327.90 mph in her Traxxas Chevrolet Camaro SS to defeat No. 1 qualifier Tim Wilkerson, who powered his Levi, Ray & Shoup Ford Shelby Mustang to a 3.943 at 323.81. This is Force’s eighth career win and first since 2014 in St. Louis. She now shares the Funny Car points lead with Wilkerson.

“It was a pretty amazing weekend for our Traxxas Chevy Camaro team,” Force said. “I was nervous going into the final against Wilkerson. I knew what kind of numbers he could put on the board and I knew I just had to be right there with him. We’ve been working really hard and I feel like this one felt even better than my first ever career win. We wanted it more than anything.”

Force defeated Bob Bode, Ron Capps and Tommy Johnson Jr. in the early rounds before facing Wilkerson in the final.

Wilkerson, a two-time 2016 event winner, battled past Jim Campbell and former world champions Matt Hagan and Jack Beckman to make it to the final round.

With Force’s victory, the NHRA Mello Yello Series has now seen four different female winners in the Nitro categories so far this season – the most in a single season in NHRA history. 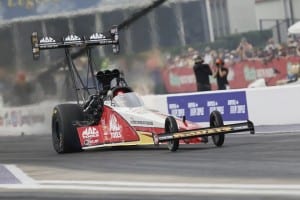 Top Fuel winner Kalitta powered to his first victory of 2016 and third at the NHRA SpringNationals with a final round pass of 3.813 at 280.60 for a holeshot victory in his Mac Tools dragster over No. 1 qualifier Steve Torrence. Torrence, a Kilgore, Texas native and driver of the Capco Contractors/Torrence Racing dragster, raced to a 3.810 at 306.81, but his slower reaction time proved to be the difference.

“I actually didn’t realize I had won until I had gotten to the end and turned around and came back,” Kalitta said. “I was real happy. It’s good to get a win and get the momentum going. It just charges everybody up. It was just a really good day for us.”

Torrence had no easy route to the final round. He sprinted past Rob Passey in the first, and then beat eight-time world champion Tony Schumacher and reigning world champ Brown in the second and third rounds, respectively.

With the win, Kalitta moved to second in points behind Brittany Force by jusy one point. Force, a two-time 2016 winner, made an early exit in the first round. Brown is third and Torrence is fourth.

This is the first time in NHRA history that sisters have led their respective Nitro category points standings.

In Pro Stock, Anderson won his third race of the season on a holeshot against Ken Black Racing teammate Jason Line. 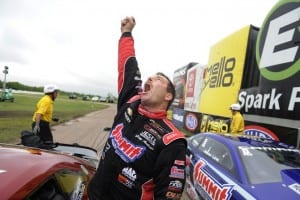 Anderson pushed his Summit Racing Equipment Chevy Camaro to a 6.630 at 209.43 to defeat the point-leader’s 6.597 at 209.95 in his Summit Racing Equipment Chevy Camaro. Anderson, who has three career wins at the SpringNationals, was also the No. 1 qualifier. The duo has combined to win the first six races of the 2016 season and share three victories apiece.

Anderson, a four-time Pro Stock world champion, opened eliminations with a bye before defeating Vincent Nobile and Allen Johnson in the second round and semifinals, respectively. Anderson trails Line in the points standings by 79.

Two-time world champion Line extended final-round-appearance streak to six – racing for a Wally in every race so far this season. He defeated veteran V. Gaines in the opening round before he had a bye in the second and outlasting teammate Bo Butner in the semifinals.