Top fan-vote getters Brandon Bernstein and Courtney Force were the lucky winners in the special lottery drawings for the No. 8 positions in the Traxxas Nitro Shootouts today during a press conference held in downtown Indianapolis to preview the Mac Tools U.S. Nationals presented by Auto-Plus, the world’s most prestigious drag race. 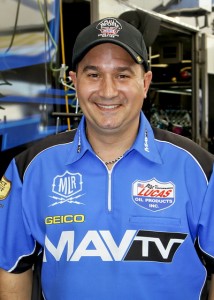 “It’s very exciting that the fans voted as much as they did for us and that my name got called,” Bernstein said. “I was worried about Clay (Millican), so I knew it would be close, but it’s fun that we got it and I can’t wait to race!”

Said Force: “I’m so excited that my Traxxas Ford Mustang is in the Shootout! I’m so thankful to the fans for voting for me. I knew it was up to chance with the lottery, so I can’t believe we actually won. It’ll be so awesome to be in my first Traxxas Nitro Shootout and I can’t wait to line up on Sunday.”

The two drivers selected today was the culmination of a process that started on Aug. 20. All drivers in both categories who had competed in each race this season but were not a part of the seven qualified drivers for each Traxxas Nitro Shootout were eligible for the fan vote/lottery. Fan voting took place on NHRA’s Facebook page and lasted until Aug. 28. The fan voting determined how many lottery balls would be assigned to each driver for the drawing. Force led the Funny Car voting with 63 percent, while Bernstein had the most votes in Top Fuel, with 35 percent.

In the other first-round pairings in Top Fuel, Winternationals winner Spencer Massey will face Topeka winner David Grubnic, Bristol winner Tony Schumacher will meet Gainesville winner Morgan Lucas and Atlanta winner Steve Torrence will face Doug Kalitta, who was inserted into the field as the highest points earning non-winner since one spot was left open with only six different winners in the regular season.

In the three other Funny Car first-round pairings, Phoenix winner Robert Hight will meet Chicago winner Jeff Arend, Topeka winner Jack Beckman will face Winternationals winner John Force and Englishtown winner Johnny Gray will race Houston winner Mike Neff. Below are the drivers who have qualified for the Traxxas Nitro Shooutouts and their first-round pairings for the lucrative bonus races which will award the winning drivers $100,000 each.

1. Antron Brown vs. No. 8 Brandon Bernstein

2. Spencer Massey vs. No. 7 Dave Grubnic

3. Tony Schumacher vs. No. 6 Morgan Lucas

4. Steve Torrence vs. No. 5 Doug Kalitta