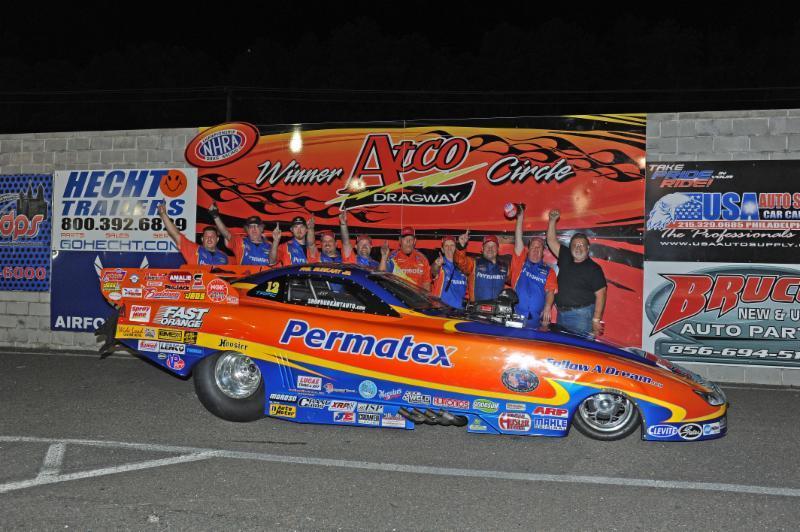 The Permatex/ Follow A Dream Top Alcohol Funny Car team is definitely on a roll, capturing its second straight win of the season this past weekend.

After winning two weeks ago at their New England Dragway home track in Epping, New Hampshire, the Jay Blake-owned Permatex/ Follow A Dream car made it two in a row this past weekend, capturing its second straight Lucas Oil Drag Racing Series regional event at Atco (New Jersey) Dragway.

“We have a ton to be proud of,” Blake said. “The one word that best describes what we’ve done in the last two races is ‘awesome.’ It really is truly awesome what we’ve accomplished.”

While the FAD team has won three races in a season in the past, it has never won three in a row. You can understand why the team is riding high and excited to keep its roll going.

“We know how humbling a sport this is, where you can go from the penthouse to outhouse in a hundredth of a second,” Blake said. “We’re incredibly proud and incredibly happy of what we’ve done as a team, how we’ve prevailed through the hard times, and it’s just awesome.”

With the win at Atco, the team opened up an even wider lead in the LODRS East Region, sitting No. 1 with a 160-point edge over the next two closest drivers.

“We’ve been working on this (kind of performance) for years,” Blake said. “Winning at home at New England was really special. Any win is special, but winning at New England Dragway, our home track, was really, really cool.

“Looking at what we’ve accomplished is awesome. Last year, we were essentially a brand new team with a new driver and new tuner, some new crew guys and we won a race.

“This year, we’ve won two races so far, we’re in the hunt again for the division championship and that’s all awesome.”

“Phil is 100 percent a professional who has an enormous passion for this sport and a huge desire to win,” Blake said. “I think a momentum like this, you get excited and just keep it going.”

What’s been the reason for the Follow A Dream team’s success of late?

“It’s a secret,” Blake said with a smile.

But the real secret is how veteran tuner Anthony Terenzio had been working on different setups all season, and finally hit upon the perfect combination at New Hampshire.

And now, with the win at Atco, it’s full steam ahead as the team goes for its third straight triumph in another LODRS event next weekend (Aug. 18-19) at Cecil County, Maryland.

“How do we keep it going?” Blake said. “We just keep doing what we’ve been doing. We’ve made some changes to the car and the car is responding.”

Following Cecil County is another LODRS race, a rain-rescheduled event in Richmond, Va. (Aug. 25-26) and then the big daddy of them all, the Chevrolet Performance U.S. Nationals in Indianapolis (Aug. 30 – Sept. 4).

While he’s not thinking ahead, Blake certainly would love a strong performance at Indy, where the FAD team’s best career finish has been a semi-final showing several years ago.

“I believe we’re a team that you have to be aware of, whether or not we win, because we are capable,” Blake said. “That’s the thing. You have to have the people and pieces and we’ve got all the right stuff.

“We want to try a couple things before we get to Indy because it’s the big show, the biggest race in the world and you want to be on your game.”

This will also be a busy month for Blake and the inspirational messages he imparts in countless public speaking engagements.

Blake, who lost his sight in an industrial accident 20 years ago, is the only blind team owner in motorsports, spoke last week at the Alabama School for the Blind.

This week, he’ll speak at the Carroll Center for the Blind in Newton, Massachusetts. He also has several other speeches lined up in the coming weeks, as well.