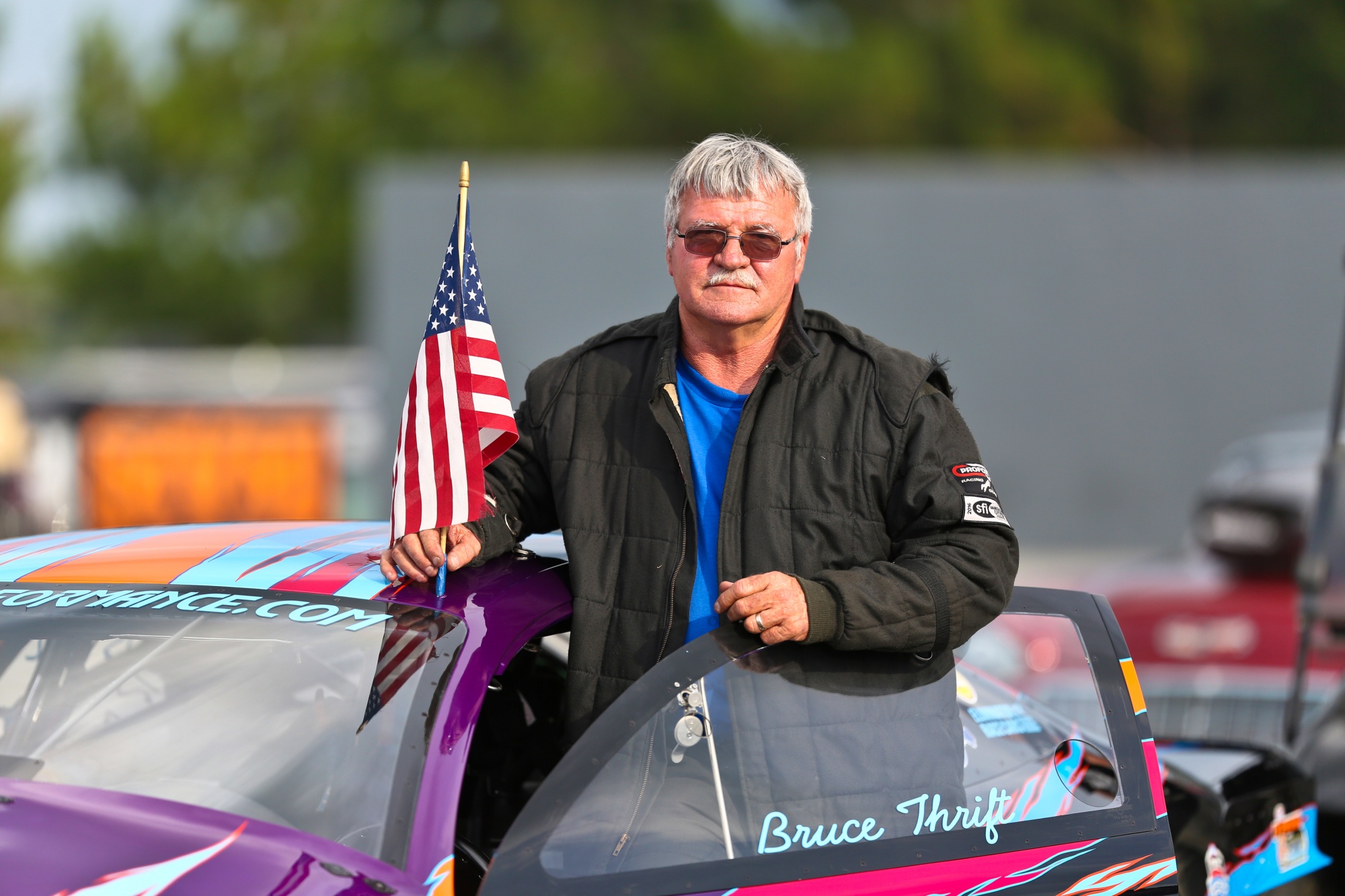 Georgia’s Bruce Thrift has been a constant player in the PDRA’s MagnaFuel Top Sportsman classes since the series started in 2014. In fact, he was at the first-ever PDRA race at Rockingham Dragway and at every other race that season. He’s missed races here and there since then, but even after a crash in 2018 and a gremlin-plagued first half of the 2019 season, Thrift doesn’t plan on going anywhere.

“I just love Top Sportsman,” Thrift says. “If I won the lottery, I’d be doing the same thing I’m doing right now because it’s so competitive. It’s one class that you can’t buy. You have to know what your car’s gonna run and you have to be on your game. Once you qualify, everybody’s equal.”

Thrift started racing IHRA Top Sportsman in the early 2000s before the sanctioning body moved to an all-run field, taking away the ultra-competitive nature that drove Thrift to the class. He also raced NHRA Top Sportsman, enjoying success in both organizations with a record that includes at least one win per season from 2004 through 2018.

Thrift was immediately drawn to the PDRA’s Top Sportsman class when the series was launched, and he’s continued to progress as the PDRA split the class into two eliminators – Elite Top Sportsman and Top Sportsman 32 – to accommodate the legions of Top Sportsman teams making the haul to each race.

“Top Sportsman used to be the fastest cars in sportsman racing, not just Super Gas cars with the throttle stop turned off,” Thrift remembers. “Back in the day it was real fun. People would be taking radiators out trying to qualify. Now, that’s what PDRA’s given us back. It’s just a major accomplishment to qualify, especially in the Elite 16.” 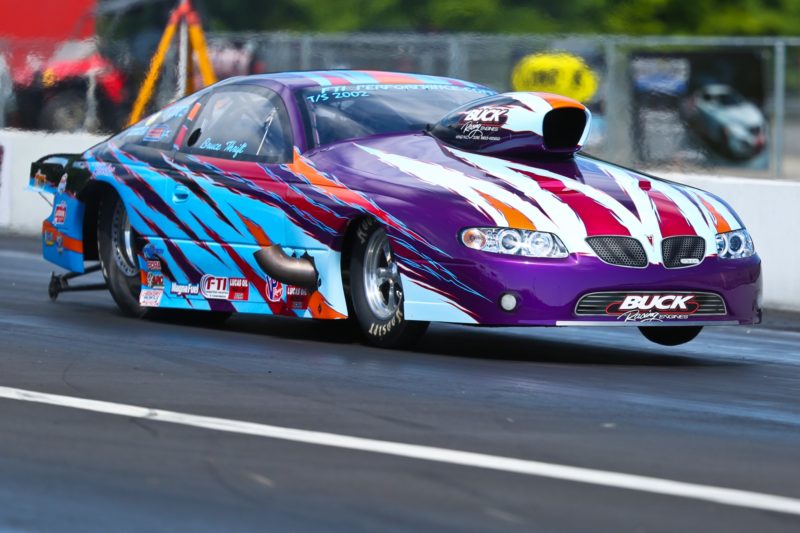 The roofing contractor has been a consistent standout in Elite Top Sportsman with his Buck-powered ’07 Pontiac GTO. He’s remained competitive with his 804ci, 5-inch bore space engine even as many of his competitors have moved up to motors approaching – and sometimes exceeding – 900ci. Thrift usually qualifies in the Elite field, joining a cast of go-fast characters like John Benoit, Erica Coleman, Scott Moore, Tim Lawrence and defending world champion Donny “Hollywood” Urban.

“You’ve just got to go to play over here and that’s what attracted me,” Thrift says. “Anybody can go bracket race at your local track. But when you’ve really got to put it out there to get in, it just makes the whole atmosphere a whole lot better and you feel like you’ve accomplished something. It ain’t for everybody, but for the ones that like to go fast, it’s the cat’s meow.”

Once he’s qualified in the 16-car field, Thrift is further motivated by the high-speed bracket racing game that goes on in the class.

“We’re down there driving the finish line at 180-plus mph looking over at the other car closing up the finish line,” Thrift points out. “The best drivers in the country, period, are in the Top Sportsman class. The pro classes, you let go of the button and you keep it pointed in the right direction and you don’t have to worry about what’s going on down there at the other end. We have to drive both ends of the racetrack, and it’s just amazing how your mind can speed up and be able to do all that. I keep an override where I can make up ground and I got a brake pedal if I need to take it away, but you first have to realize where you’re at and where you’re supposed to be at that point in the race.”

Thrift is the first to admit his 2019 season isn’t going according to plan, though he hasn’t had a first-round loss all year. He believes he’s driving as good as he ever has – his reaction times varied by just two thousandths at the Summer Nationals Ignited by Lithium Pros at South Georgia – things just haven’t gone his way. The absence of main crewmember Mickey Miller coupled with a mechanical gremlin have prevented Thrift from running to his full potential.

“Plus, it’s been like trying to walk one-legged without Mickey here,” Thrift says. “It’s just been one of those years, but I ain’t given up. I still feel like I have a shot at the championship. I’m seven rounds out and there’s 16 rounds of racing left.”

While Thrift has been around the PDRA long enough to experience the generous and sportsmanlike conduct of his fellow competitors on plenty of occasions, his latest troubles and the help he’s had to fix them reassured him that he’s racing with the right group of people. 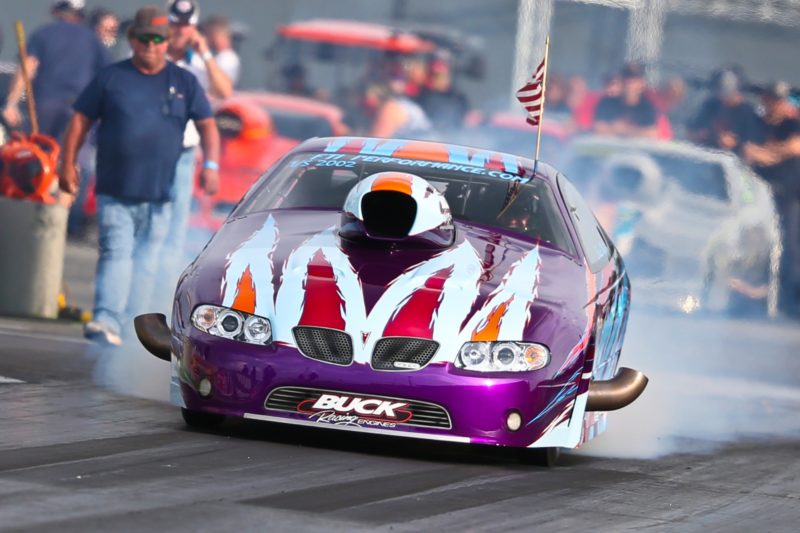 “It don’t matter if you’re running Pro Nitrous or Top Sportsman, everybody is treated the same,” Thrift says. “You can be having problems and the Pro Nitrous guy will step up to help you just as quick as the guy parked next to you. Anything you need, there’s someone right there to help. It’s just a big family-oriented deal.”

Thrift also called upon the Top Sportsman community when it came time to make repairs to his RJ Race Cars-built GTO after his crash at Florida’s Gainesville Raceway in early 2018. Before thanking Hoosier Racing Tires and Buck Racing Engines, Thrift offered up his gratitude to the people who helped him get back on track with a car that looks better than ever.

“I have a bunch of people that help me,” Thrift says. “Clayton Murphy at Chassis Engineering, he always hangs out with us and we try stuff for him. He redid the car and did a really, really good job for me. FTI Converters, that’s the backbone of going fast. Aaron Glaser at Glaser Collision in Kentucky did the paint job. It’s just unreal, the art and craftsmanship that went into it. When you see it, you know it’s me. I’m from the hippy days – I’ve gotta have every color in the crayon box on it.”