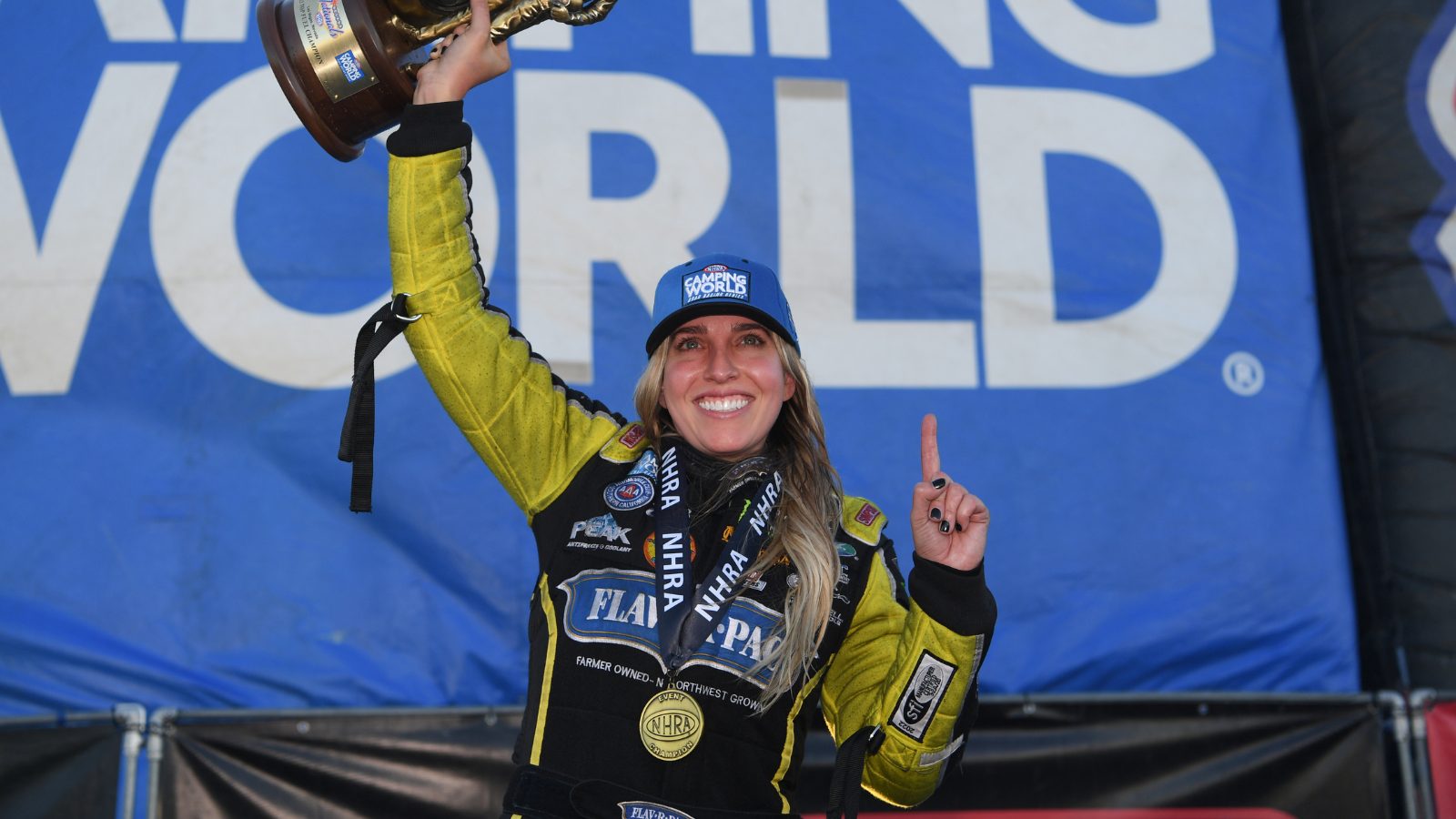 Brittany Force and the Flav-R-Pac / Monster Energy team picked up their fifth win of the season Sunday at the NHRA Nevada Nationals at The Strip at Las Vegas Motor Speedway and with it took back the NHRA Camping World Drag Racing Series points lead with just one race left in the 2022 season. Robert Hight and the Automobile Club of Southern California Chevrolet Camaro SS team grew their points lead with a runner-up finish while Austin Prock took the Montana Brand / Rocky Mountain Twist team to the semifinals and John Force with PEAK Antifreeze and Coolant had a second-round exit.

Brittany Force and the Flav-R-Pac dragster earned a first-round bye coming into race day as the No. 1 qualifiers. With the test run they would lay down a 3.671-second pass at 336.91 mph to earn lane choice over Antron Brown in the second round. Force would take the quarterfinal win with a 3.732 pass at 327.98 after Brown hazed the tires and shut off early for a 4.156 pass at 211.06. 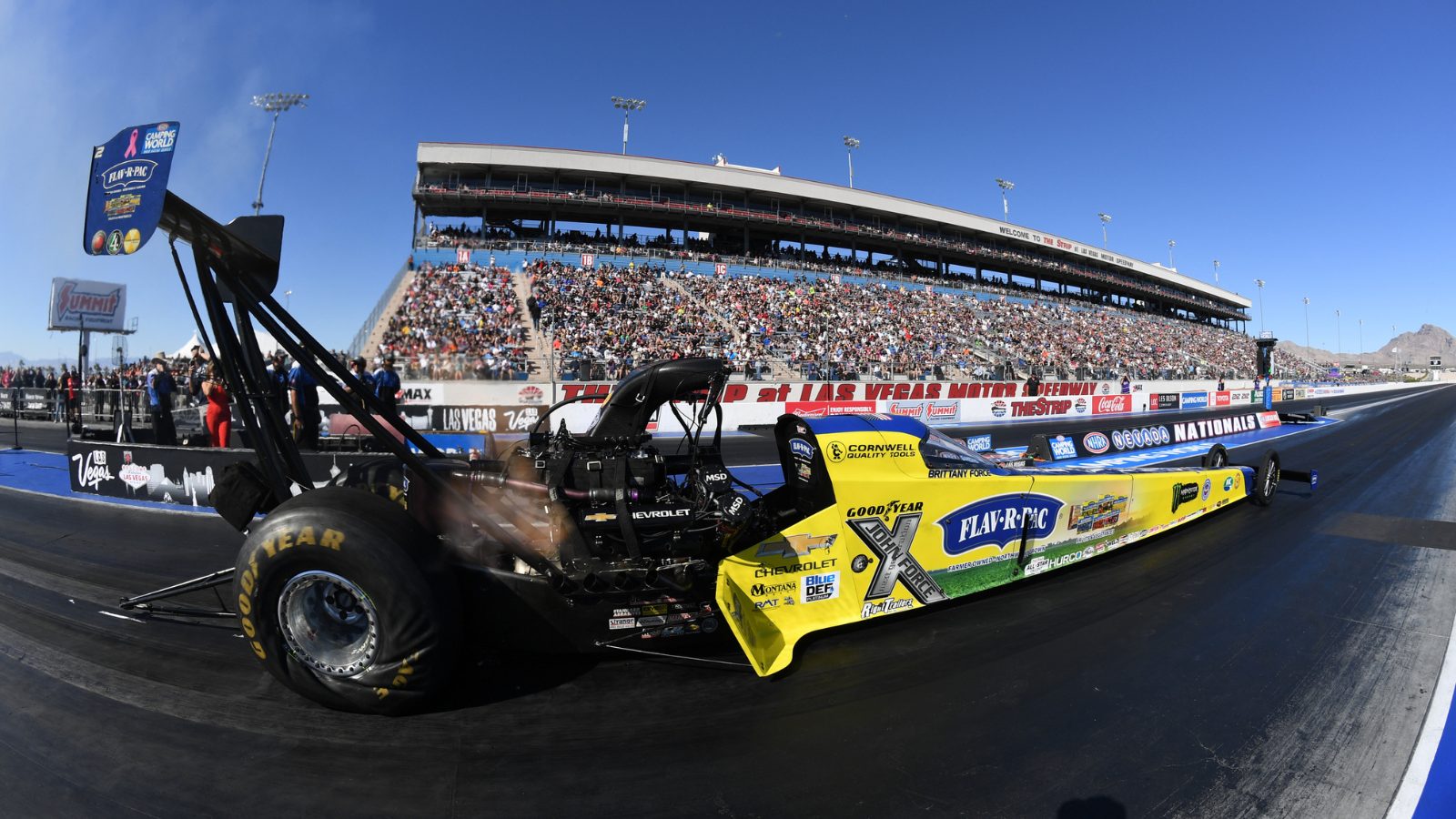 The semifinals would match Force with eight-time world champion Tony Schumacher. Nearly identical on the tree, Force would take the lead early and never trail for a 3.712-second run at 331.85 mph to send Schumacher and his 4.075 at 216.55 packing.

“This shows you; Pomona is going to be exciting, going to be a thrill for everyone. This Flav-R-Pac / Monster Energy team, we feel good. We dominated all weekend, picked up qualifying points, went rounds and got the job done. You know we struggled through the whole Countdown and we started to turn it around that last weekend in Dallas, but then I screwed it up. So, to come out here and win on a holeshot, it’s giving it back to my guys for all the times they carried me. It’s a thank you to them,” Force said. “We wanted to win today, we chased it down and we got it done. We’ll keep our focus and worry about what we can control as we head into Pomona. I wouldn’t want to go into this battle with anyone else but this Flav-R-Pac / Monster Energy team.”

Robert Hight, who came into the race as the No. 1 qualifier for the sixth time this year and 77th time in his career, would face Jeff Arend in the first round after Terry Haddock’s qualifying run was disqualified on Saturday evening. Hight would have a clean pass going 3.881-seconds at 331.04 mph for the win over Arend’s 4.161 at 285.35. The second round would be a tight side-by-side drag race with Alexis DeJoria. Hight would get off the line first and slowly pull away for a 3.894-second pass at 327.03 mph bettering DeJoria’s 3.907 at 326.24 for a .013 margin of victory.

“That wasn’t quite the way we scripted the weekend ending. Still not a bad weekend for our Auto Club team we were able to grow our points lead which was important, we went rounds and qualified well, every point matters right now,” said Hight, who had made his 96th career final round appearance. “We’re still in control of our own destiny, if we go out and win Pomona, we win the championship. This team knows how to get the job done, eight wins so far this season, one more and we know we have the title. The competition is so intense right now, it’s going to be a fight but this Auto Club team is ready for it.”

Qualified No. 2, Austin Prock and the Montana Brand / RMT dragster team started eliminations with a victory over Cameron Ferre. Prock would handle his hot rod to 3.744-seconds at 324.28 mph to defeat Ferre’s best pass of the weekend at 4.040 and 261.72. In the second round, Prock would find himself lined up with four-time and reigning world champion Steve Torrence. Prock would have the starting line advantage and never let up going 3.732 at 327.19 mph defeating Torrence’s 3.733 at 321.81.

In the semifinals, Prock would have to take on championship hopeful Mike Salinas. Prock would have the starting line advantage but lose the fight mid-track with an engine explosion to go 3.806-seconds at only 313.88 mph. Salinas would take the win with a 3.726 at 328.62.

“Awesome weekend for our Montana Brand / Rocky Mountain Twist team. We backed out No. 1 qualifier from Dallas with a No. 2 and then had a semifinal appearance,” Prock said. “We managed to move up in the points again and we’ll be looking for another strong weekend in Pomona.”

“Not a bad weekend, not the way we wanted it to end, but we qualified well, went a couple rounds,” Force said. “Overall, it was a good weekend. Brittany with Flav-R-Pac getting the win and the points lead back and then Robert with Auto Club going to the finals and gaining points, making sure we’re all still chasing him. Even Austin Prock over there with Montana Brand, he went some rounds. So we’re in a good spot. Pomona is going to be exciting, going to be an exciting end to the season.”