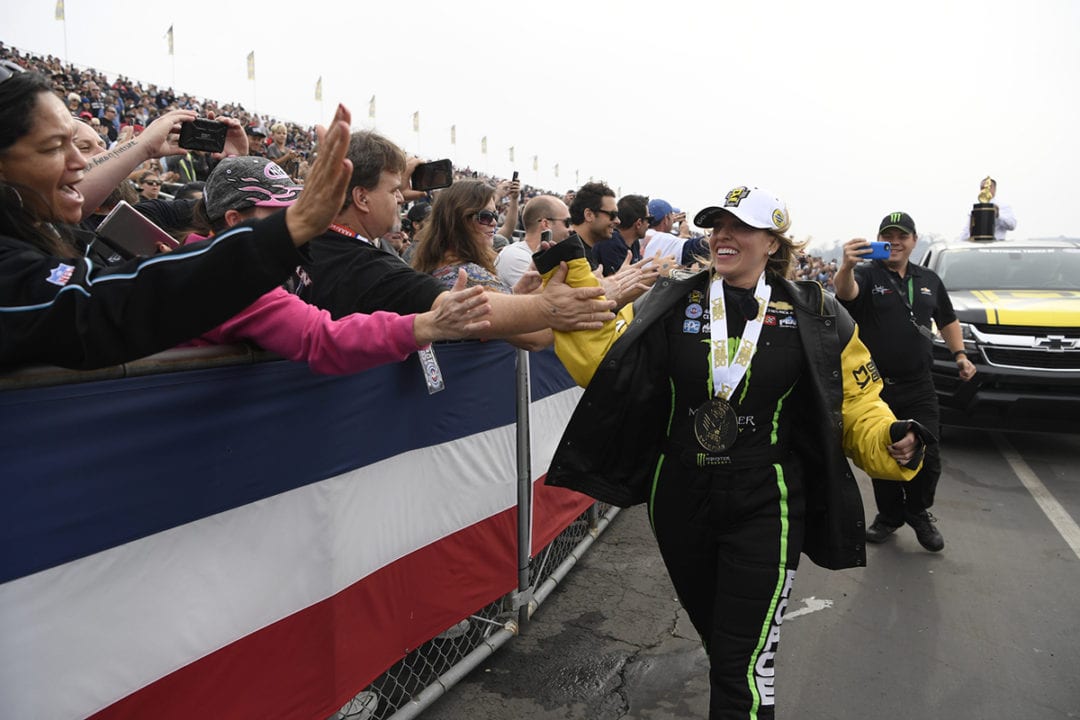 For the first time since 1982, a female has captured a NHRA Mello Yello Drag Racing Series Top Fuel world championship. Brittany Force clinched the category crown in the quarterfinals of eliminations Sunday at the Auto Club NHRA Finals at Auto Club Raceway at Pomona.
Robert Hight (Funny Car) and Bo Butner (Pro Stock) also won world championships in their respective categories at the final 2017 NHRA Mello Yello Drag Racing Series event. The race winners at Auto Club Raceway at Pomona were Force (Top Fuel), Tommy Johnson Jr. (Funny Car), Butner (Pro Stock) and Andrew Hines (Pro Stock Motorcycle).
Force, daughter of 16-time Funny Car world champion John Force, became just the second female to win a Top Fuel world championship by piloting her Monster Energy dragster to a 3.679-second pass at 328.22 mph defeating Richie Crampton and his 3.757 pass at 323.81 in the quarterfinals. The other female to win a championship in the category was legendary racer Shirley Muldowney. Steve Torrence, who entered the race as the Top Fuel points leader, fell to 2016 world champion Antron Brown’s 3.691 pass at 323.81 to guarantee the title crown to Force.
“I can’t believe we are here, it seems like a dream,” Force said. “The reason we are here is because of that Monster team and all the support I have and all the sponsors. Everyone at JFR and that is the reason we are here. We struggled, we had our ups and downs, but we pulled it together when it mattered most. I give all of it up to my crew chiefs, Alan Johnson and Brian Husen, they are the ones that made this possible. They always had my back and they kept pushing me that is what my Monster team did, they never gave up on me, pushing and fighting and never gave up. I can’t believe we are here. I have to thank my dad, my family, they always had my back no matter what. This is a very proud moment. I can’t believe we are here. It is the support system you have around you and that is why we are here.”
Force, who was also the No. 1 qualifier, raced to victory at the season ending event by defeating Shawn Langdon with a 3.668 pass at 330.07 when he smoked the tires in the final round. She finishes the season with four race wins, the first coming at the New England Nationals in Epping, N.H. Force went on to win three events in the NHRA Mello Yello Drag Racing Series Countdown to the Championship, the Dodge NHRA Nationals in Reading, Pa., the AAA Texas NHRA FallNationals and this weekend’s season ending event. She has two runner-up finishes and two No. 1 qualifiers.