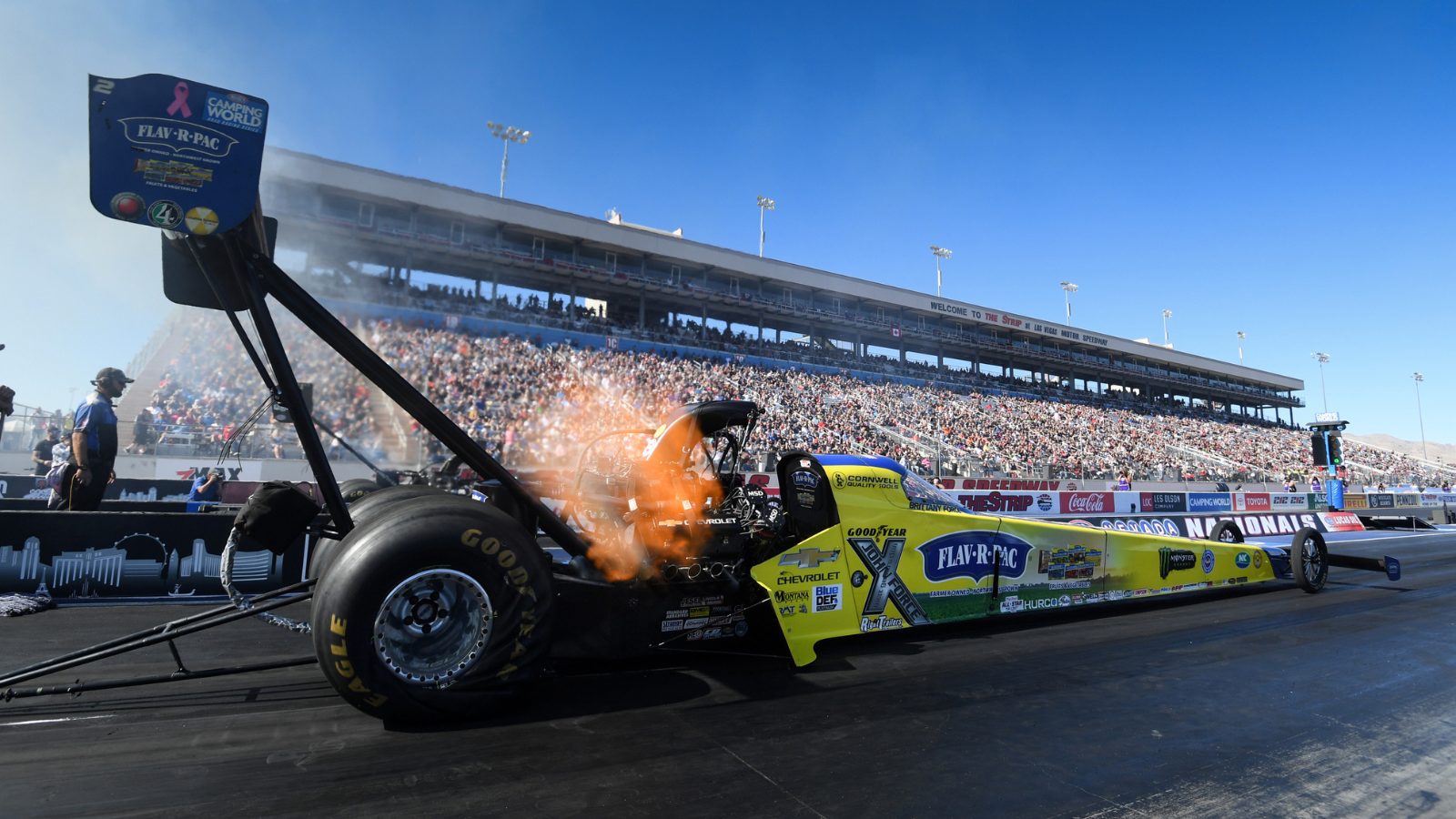 Robert Hight with the Automobile Club of Southern California Chevrolet Camaro SS and Brittany Force with the Flav-R-Pac / Monster Energy dragster secured the No. 1 qualifying positions in their respective categories Saturday at the NHRA Nevada Nationals at The Strip at Las Vegas Motor Speedway. Austin Prock landed the Montana Brand / Rocky Mountain Twist dragster in the No. 2 spot while John Force and the PEAK Antifreeze and Coolant Camaro are in the No. 5 spot.

Robert Hight and the Auto Club team would stumble in the third session smoking the tires for only a 4.742-second pass at 168.83 mph. The Auto Club Chevy bounced back with a 3.865 at 332.67 in the fourth qualifying session to earn two bonus points for being second quickest of the group. With the No. 1 spot, Hight will take on Terry Haddock in the first round.

“I would say it was mission accomplished in qualifying this weekend. We came in with a 10-point lead and we’ve turned it into a 21-point lead just in qualifying. That’s a big deal,” Hight said. “We pushed it too hard earlier today and tonight we tried to run better than 3.85 but the clutch didn’t cooperate. But we’re splitting hairs really. If we can run in that range four times tomorrow, I think we’re going to be on top at the end of the day. We just need to keep focusing on the task at hand, I need to cut a good light and keep it in the groove and whatever happens, happens. We just have to do our best, that’s what’s got us here. Been doing it all year and we’ve mastered it so we just have to keep doing it.”

Brittany Force and the Flav-R-Pac dragster gathered another three bonus points with their 3.673-second pass at 334.57 mph on their third lap of qualifying. Force would stay consistent going 3.691 at 331.36 in the Flav-R-Pac’s final qualifying try. She’d was third quickest of the session and also earned one bonus point.

“Looking at our overall qualifying, this Flav-R-Pac team is in a great position with four solid passes. Overall fantastic for our team, we have four good runs to set us up for race day. It feels like we are back on track; grabbed No. 1spot, grabbed bonus points and the solid runs give the entire team confidence,” Force said. “Our car can get down the track, we did it four times and we’re looking for four more tomorrow. We get the first-round bye and that’s huge because we get to be on track and feel it out before heading into the second session with an opponent.”

Austin Prock and the Montana Brand / RMT dragster picked up the pace in the third qualifying session going 3.702-seconds at 332.26 mph. There was nothing but improvement in the final qualifying session with the Joe Barlam and Rahn Tobler tuned dragster rocketing to a 3.685 at 334.32 mph. In addition to securing the No. 2 spot, Prock would pick up three bonus points for being quickest of the final session.

“Great day for our Montanan Brand / Rocky Mountain Twist team. We made two great runs and ended up qualified No. 2 behind our teammate,” said Prock who will face Cameron Ferre in the first round. “I’m looking forward to a long Sunday and the chance to keep picking at the points chase.”

John Force and the PEAK Chevy had their first clean pass of the weekend in the third session, it would be a solid 3.889-second run at 334.57 mph and quickest of the session for three bonus points. The PEAK Camaro kept up the performance with a 3.873 at 324.28 in the final session. With the No. 5 spot, Force will face Blake Alexander in the first round.

“Good day for this PEAK Chevrolet. Definitely pulled it together from yesterday. Danny Hood and Tim Fabrisi, they surprise me sometimes, pulling out the numbers that they do but it’s good,” Force said. “Hopefully keep this going tomorrow, chasing down Robert and the points lead. We’re in it so we’ll just see what happens.”

Competition at the NHRA Nevada Nationals continues with eliminations Sunday at 11:00 a.m. Television coverage of the event will be on FOX Sports 1 (FS1) on Sunday beginning with qualifying at 2:00 p.m. ET and eliminations at 4 p.m. ET.