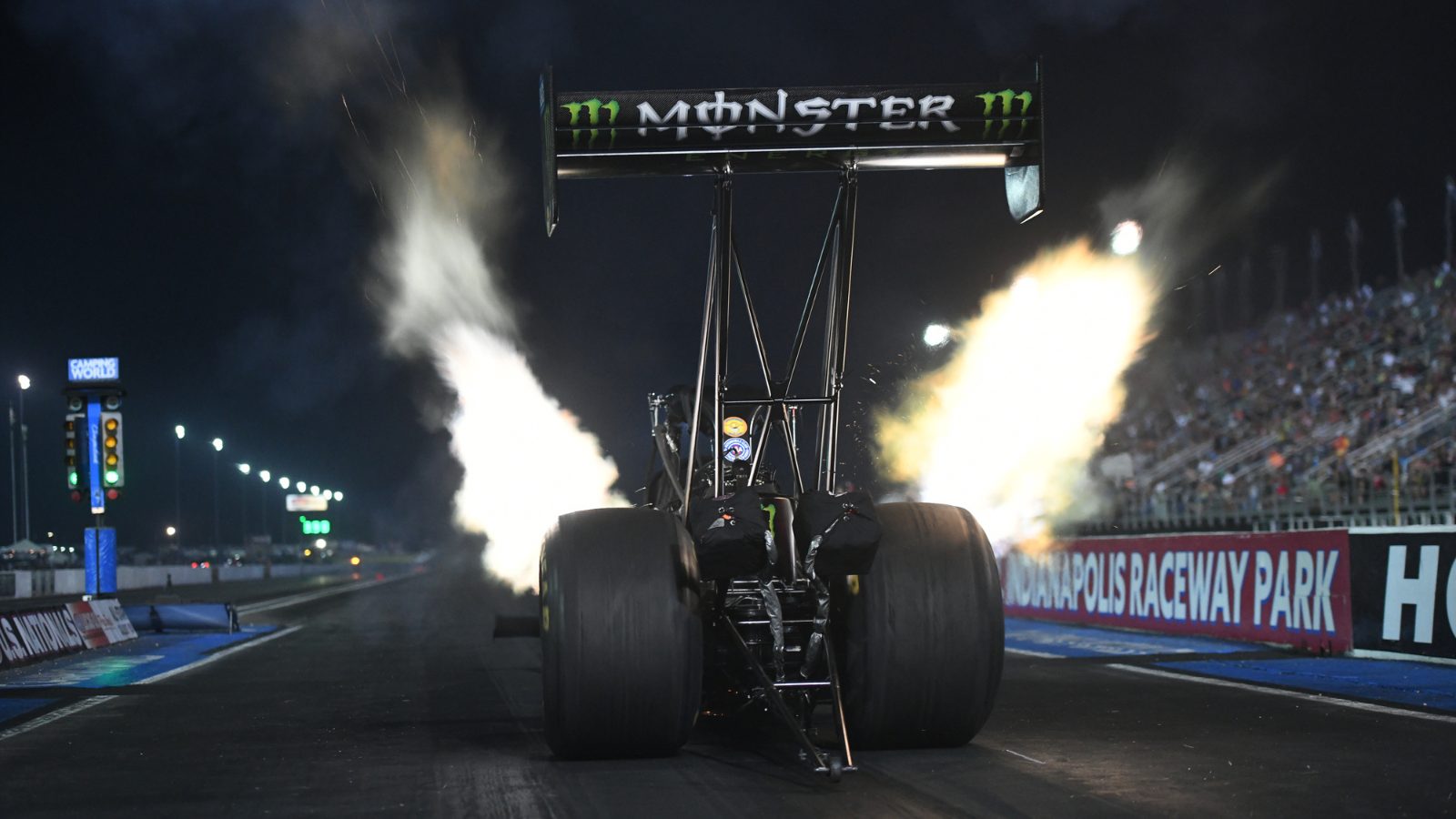 Brittany Force and the Monster Energy / Flav-R-Pac Chevrolet dragster team finished runner-up in the Pep Boys NHRA Top Fuel All-Star Callout while moving into the No. 4 qualifying spot at the Dodge Power Brokers NHRA U.S. Nationals at Lucas Oil Indianapolis Raceway Park. Robert Hight and the Automobile Club of Southern California Chevy Camaro team kept up their performance and held onto the No. 1 spot on Saturday. John Force and the PEAK Antifreeze and Coolant Chevy stayed consistent sitting No. 3 while Austin Prock in the Montana Brand / Rocky Mountain Twist dragster broke into the field at the No. 12 spot.

Brittany Force and the Monster Energy / Flav-R-Pac team had double the pressure pulling up to the first round of qualifying on Saturday. Their second qualifying pass was also the semifinals of the Pep Boys NHRA All-Star Callout. Racing against Mike Salinas after earning the right to pick her opponent, Force would haze the tires down track but manage to pick up the win after Salinas smoked the tires early. With a 4.016-second pass at 230.29 mph bettering Salinas’ 7.929 at 84.99, Force would face Steve Torrence in the final round of the Callout still looking to qualify for race day at the U.S. Nationals.

Force would get the job done in one sense on Saturday evening. Her 3.704-second pass at 330.31 mph would temporarily earn her the No. 4 qualifying spot but it wouldn’t be enough to get the Pep Boys NHRA Top Fuel All-Star Callout victory. Torrence would get the win with a 3.692 at 329.02.

“Kind of a bittersweet day. This Monster Energy / Flav-R-Pac team, we struggled a little bit early during qualifying, couldn’t get it down there. We turned it around there in the Callout final round. We came up just short of getting that win, we ran a 3.70 he ran a 3.69, it was right there,” Force said. “We put a great amazing show on for the fans so we were excited to do that but bummed that we lost. It’s tough to get beat that way, but overall it was a good day. That was a good lap and it qualifies us for the show Monday which, overall, is the most important thing. We want to compete on Monday, be in a good position and get the win.”

Robert Hight and the Auto Club Chevy had the first pick in the Pep Boys NHRA Funny Car Callout and used it to select Bob Tasca III as their opponent in Sunday’s first round. Hight got a preview of the match-up in the second qualifying session when the pair ran side-by-side. Hight would be quickest of the session with a 3.924-second pass at 326.16 mph. In their third qualifying effort, Hight would have another solid run at 3.896 seconds and 329.34 mph, second quickest of the session.

“Three runs in a row that this Auto Club Chevy made respectable runs. That’s what you have to do to win races, whether it’s a specialty race or on race day Monday. Hats off to the team hoping for more, trying to run better than that 3.87 last night,” said Hight who stays No. 1 off his Friday night run of 3.870-seconds at 331.94 mph. “Race day for the Callout tomorrow and I’m excited. As far as our selection, there’s no guarantees after first round you’re going to get lane choice because typically this is a one lane race track. We thought originally it was going to be hotter, a little bit tougher conditions and that would have played into our hand. When the conditions changed, we didn’t change our minds. We figured we were going to either win or lose first round or final round against him so why not get out there and have some fun. That’s what this is all about, creating excitement for the fans so why not have the two best cars in the country running against each other. It’s going to be an exciting morning.”

John Force and the PEAK Chevy didn’t have a chance to pick or be picked for the Pep Boys Funny Car Callout, he would be matched with Cruz Pedregon. Like Hight, Force was able to get a first-round preview in the second qualifying session. Force would go 3.979-seconds at 302.62 mph after shutting off well before the finish line lights. The PEAK Chevy would pick things back up in the third qualifying session with a clean 3.914 at 329.34.

“Good day, rain held us up a little, but we got both sessions in and this PEAK Chevy did well,” said Force, who will stay No. 3 off his 3.881-second pass at 333.25 mph from Friday night. “We get two more tomorrow, hopefully, if rain holds off. But we’re in the show and we have the Pep Boys Callout. Going to be an exciting day tomorrow if we can get it done. I’m looking forward to it and looking forward to race day on Monday.”

Austin Prock and the Montana Brand / Rocky Mountain Twist dragster struggle through the first qualifying session of the day, going up in smoke almost immediately to coast to 10.581-seconds at 66.53. In their third qualifying try, the Joe Barlam and Rahn Tobler tuned Montana Brand machine shot themselves into the No. 12 spot with a clean 3.750 pass at 333.58 mph.

“That was a nice finish to the day. This Montana Brand / Rocky Mountain Twist team started out on the wrong foot again this morning but got it turned around Q3,” said Prock. “We made a nice clean pass that we can build off of tomorrow. Hoping for two more competitive runs to give us some confidence going into Monday.”

Competition at the prestigious U.S. Nationals continues with the final two qualifying runs Sunday at 1 and 4:30 p.m. Eliminations are set to begin on Monday at 10 a.m. The Pep Boys All-Star Funny Car Callout will be Sunday with first round at 1:20 p.m., semifinals at 2:45 p.m. and final round a 4:55 p.m. Television coverage of qualifying and the Callout will be on FOX Sports 1 (FS1) with shows Sunday at 1, 4 and 5:30 p.m. ET. Eliminations coverage will be split with a show at noon ET on FS1 and then 2 p.m. ET on FOX Broadcasting Network.