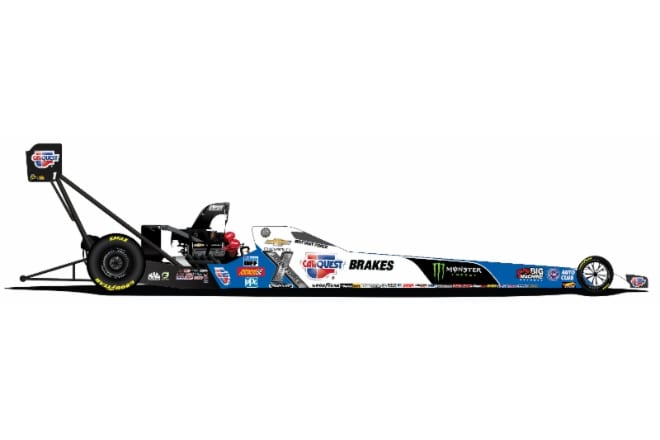 For Brittany Force the 39th annual Dodge Mile-High NHRA Nationals will be a chance for the reigning Top Fuel champion to get her first win on the mountain and also highlight a new sponsorship partner with Carquest Brakes emblazoned on the side of her 10,000 horsepower Top Fuel dragster as well as her parachutes.
“We will have a new look with Carquest Brakes and that is exciting. You want to get those wins for the new sponsors. Carquest is running a special promotion this month with Speed Perks members. They can get a nice discount on Carquest Platinum Professional Brake Pads from advanceautoparts.com. We are glad they came on board and we are going to give them our best,” said Force.
Force has one final round appearance on the mountain a runner-up in 2014 where she dropped a close race to JR Todd. Since then she has raced to two more semifinals and qualified in the top half of the field.
“I am ready to get to Denver. It is a whole new ballgame up there,” said Force. “It is the only track like this with the high altitude all season long. It is a challenge for the crew chiefs and the entire team. We have haven’t won there but we have gone some rounds and have had some race day success. We are hoping to get there this weekend and bring home the win.”
This season Force has overcome a tough start in her championship defense. In the opening race of the season Force destroyed her race car in the first round but the determined driver did not miss a beat and fought back into the winner’s circle just four races later picking up a win in Houston.
“It was tough getting back into the race car in Phoenix after the Pomona crash but I knew it was something I had to do right away. Once I got in the cockpit I felt really comfortable. I have gone through physical therapy and I am back in the gym. I feel better every day,” said Force.
The Top Fuel World Champion has also been on a media blitz leading up to the NHRA national event at Bandimere Speedway. As an Espy nominee for Best Driver by ESPN Force has been interviewed repeatedly about his success last season and what it would mean to be the first NHRA winner of the prestigious award.
“It is an honor to be nominated for an Espy to recognize what our Monster Energy team accomplished last season,” said Force after the nomination. “We moved from sixth to first in the Countdown and I am really proud of how we finished that season. Getting this Espy nomination just tops it all off. To be recognized with some of the greatest names in motorsports, not just the NHRA, is something that is really special to me.”