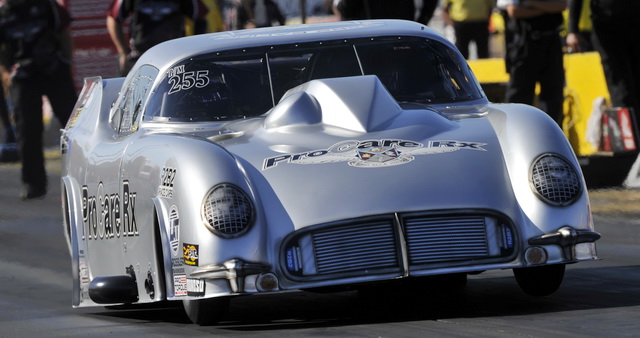 The Georgia-based driver defeated top qualifier Don Walsh with a powerful run in his R2B2 Racing 1953 Corvette in the opening round and never looked back as he took his first career victory at the rain-delayed event at historic Lucas Oil Raceway at Indianapolis.

Brand started the rain-delayed event as the crew chief for the R2B2 Racing’s two turbo powered entries in the NHRA Pro Mod Series presented by ProCare Rx. When the rains pushed racing to a second weekend, driver/team owner Roger Burgess couldn’t make it back to resume the race.

The figurative keys to the ProCare Rx Chevy Corvette were turned over to Brand with one opportunity to make the field.

“I really thought I’d be able to get down the track,” Brand said. “The air was so good yesterday that we had more power than we’ve had for this car all season. I missed it pretty bad.”

So bad, in fact, that Brand qualified No. 17 and initially didn’t make race. Luckily, some racers who were at Lucas Oil Raceway for the first weekend, couldn’t make it back for the second. Brand, as first alternate, got into the field as the No. 16 qualified car.

“We got lucky,” Brand said. “I knew if we turned the power down, we’d still go fast.”

Brand was fast enough to beat No. 1 qualifier Don Walsh in the first round on Sunday morning then followed it up with wins over Steve Matusek, Rickie Smith and finally Mike Castellana in the final.

“I think it’s safe to say we made some good calls today,” Brand said. “Good calls, great team, no parts breakages. It’s a pretty nice feeling. We’ve been so close this year, I’m so glad it all came together today and Roger saying for me to treat the car like it’s my own.”

Brand’s teammate, Leah Pruett, got to exorcise some Indy demons herself, getting a first-round win over Donald Martin before falling in the second round to Smith.

“I’m thrilled I got to the second round,” Pruett said. “And you couldn’t ask for anything better than having your team win the race. I feel like I’m now back on a upward swing. We’re really getting the cars figured out the way we want them to.

“I’ve been really impressed with the unity of our team, it can be rare to have a group where everyone gets along and enjoys working together.”

With the runner-up finish, Castellana moved to first place, four points ahead of Smith in the season points standings.