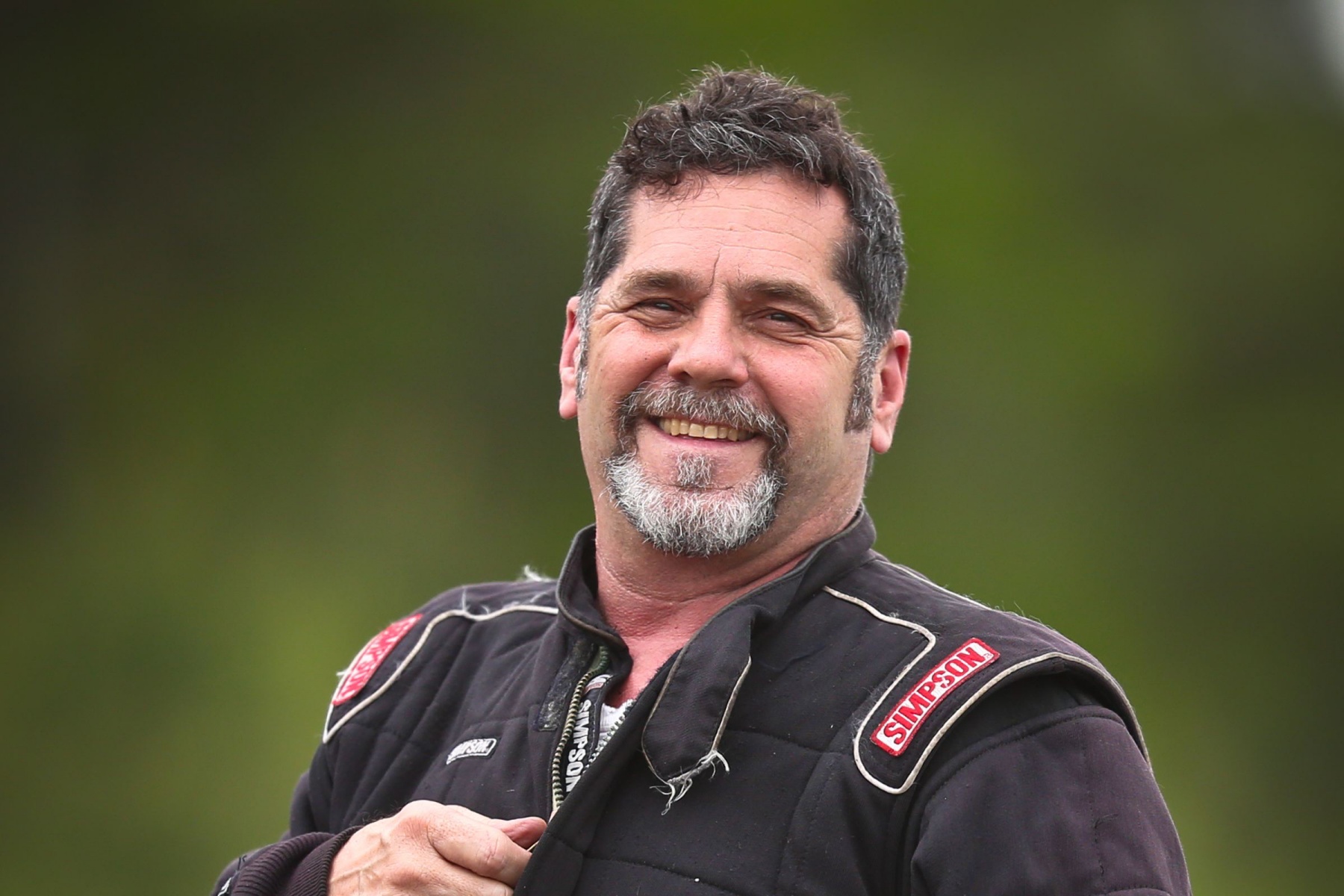 As a Switzer Dynamics Pro Nitrous racer, Johnny Camp has been a part of the PDRA conversation since the series started in 2014. But since switching to Penske/PRS Pro Boost presented by WS Construction, he’s become the topic of the conversation.

Camp earned his first-ever PDRA event win at DragWars presented by Modern Racing at GALOT Motorsports Park last October, then kicked off the 2021 season with another GALOT win at the East Coast Nationals presented by FuelTech. He’s solidly in a position to race for the 2021 Pro Boost world championship in his ProCharger-boosted “Hells Bells” ’69 Camaro.

“Obviously, we’d like to win the championship,” Camp says. “We’d like to do our best, go race to race and do the best we can. There’s a lot of teams that are more heavily funded than we are, but we hang in there.”

Camp’s racing career dates back to the ‘80s when he raced drag boats. When boat racing venue options started drying up, Camp shifted his focus to fast street cars. Those fast street cars started getting faster, and in the mid-2000s he jumped into the local Pro Mod scene near his home base in the Pittsburgh area.

Nitrous oxide was Camp’s power adder of choice for many years. He kept going deeper and deeper into the nitrous racing pool until he reached the point where he felt like he couldn’t keep up. That prompted a change to Proline Racing’s ProCharger program over the offseason going into 2020.

“We’ve always ran nitrous – first, two kits, then three kits, up to six kits,” Camp says. “It got to the point where to go any faster was beyond my tuning capabilities. I kind of would’ve needed a professional tuner and professional crew and there was none really available. Proline came along with this deal and we switched.” 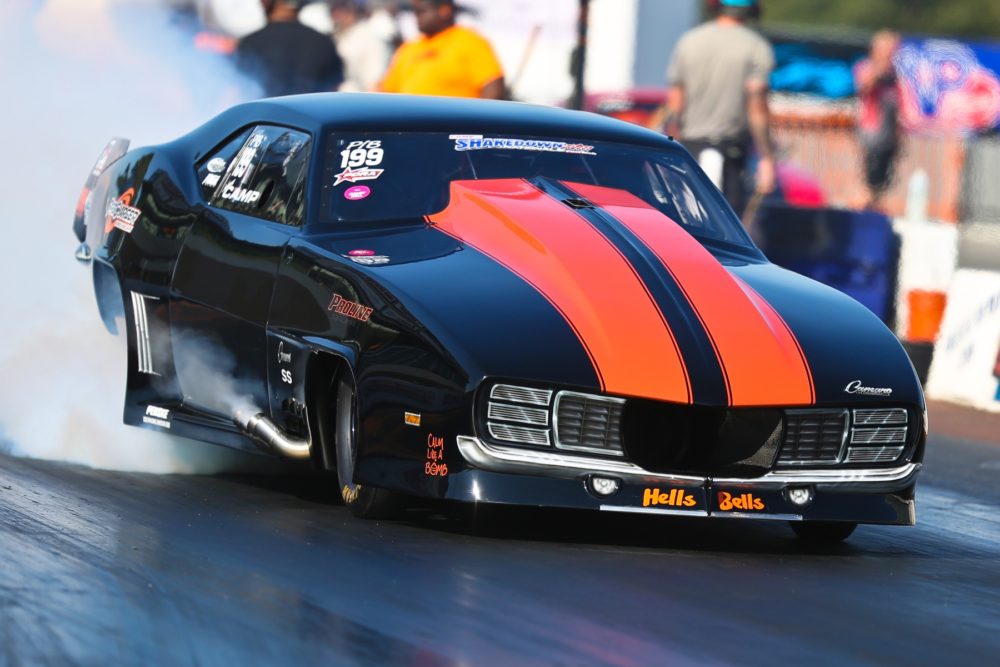 The switch quickly started paying off for Camp, who earned his first low qualifier award in the series at the PDRA Summer Shootout at Virginia Motorsports Park in late August. A month earlier, he won the Northeast Pro Mod Association race at Maple Grove Raceway. His first PDRA win followed in October at DragWars.

“It was nice to be running at the top of the field again and to get some wins,” Camp says of his long-awaited victories. “We won an ADRL race [in 2013] with nitrous, but then we had a big dry spell. We were right there. We never fell out of the top 10, but we just weren’t getting the results that I wanted.”

Camp is especially proud of his team’s recent performance because the Pro Boost class is so competitive right now. It’s taken passes in the 3.60s to qualify in the top half of the field at the first two races of the season, and races are decided by slim margins and in more than a few occasions, holeshot advantages.

“Anyone in Pro Boost now, they’re just all top-quality equipment and top-quality drivers,” Camp says. “Everywhere you go, these are all quality cars. There’s no easy rounds. Everybody is as good as everybody.”

Some of Camp’s toughest competitors in the class are also quasi-teammates in the Proline Racing camp. The group includes GALOT Motorsports drivers Kevin Rivenbark and Daniel Pharris, as well as Jason Harris in the “Party Time” ’18 Camaro and Randy Weatherford in the WS Construction ’17 Camaro.

“I’m thankful to be a part of the Proline organization and that they think enough of me as a driver to even take me in,” Camp says. “I really like the relationship. Can’t say enough about them.”

Being a part of the Proline group includes working with tuners like Brandon Stroud, who handles the tuning duties on Camp’s Camaro. In just his mid-30s, Stroud has become one of the most sought-after tuners in the turbocharged and ProCharged Pro Mod game.

“I think we have a good relationship,” Camp says of working with Stroud. “He’s young, I’m old. He’s real computer savvy and I’m just watching him and learning. It’s a pleasure working with him. His father [Chris] is a mechanic on the car, the lead mechanic. We all get along good and we have a good relationship. We’ve all become friends, like family.”

Along with Proline, Camp attributes his recent success to quality products and service from manufacturers like ProCharger and Mark Micke’s M&M Transmission. He also receives support from NGK Spark Plugs and Tatman Electric Company. 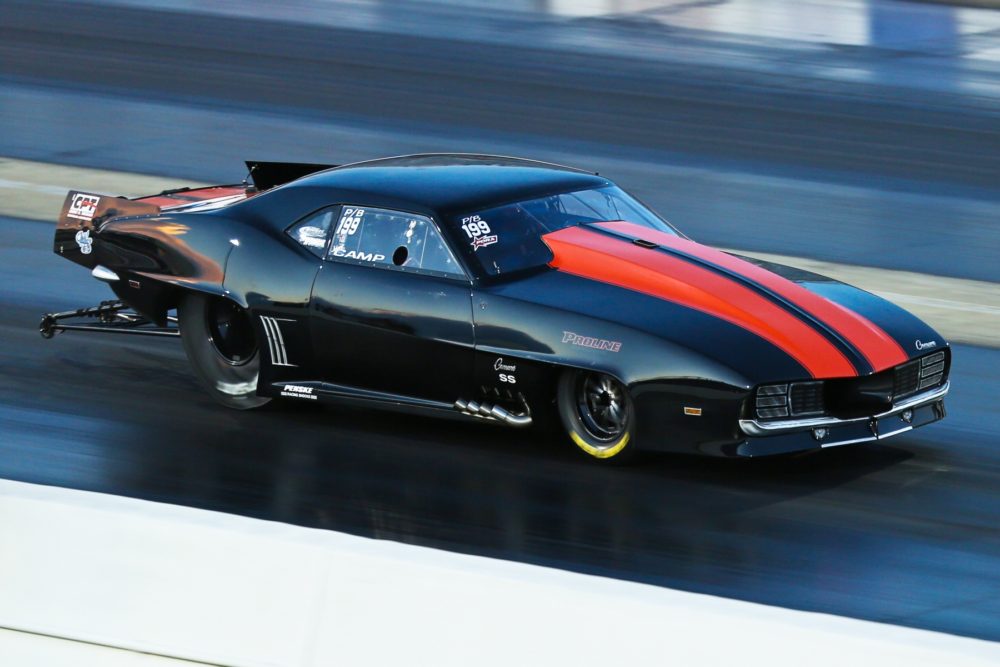 “I built houses up until ’99,” Camp begins. “My brother was working at Schwing America [a concrete pump manufacturer] and he decided he wanted to move home because my parents were getting older. So we started a poured concrete foundation business. We built that up and we bought out a ready-mix concrete company. We already had concrete pumps, so we do pumping – residential, commercial and industrial foundations. We’re also a ready-mix concrete supplier. It’s working out good.”

The concrete business keeps Camp plenty busy, but not too busy that he doesn’t have time for racing. With the best race car he’s ever had, the Pennsylvania native is highly motivated to do as much racing as he can.

“This schedule here is pretty friendly for us,” Camp says. “We don’t have to miss much time at work for travel. I’m excited to go to Norwalk and Maple Grove. They treat us nice. We’re going to try to hit some other races if we find time, but we’re going to do all the PDRA races. We want that championship.”