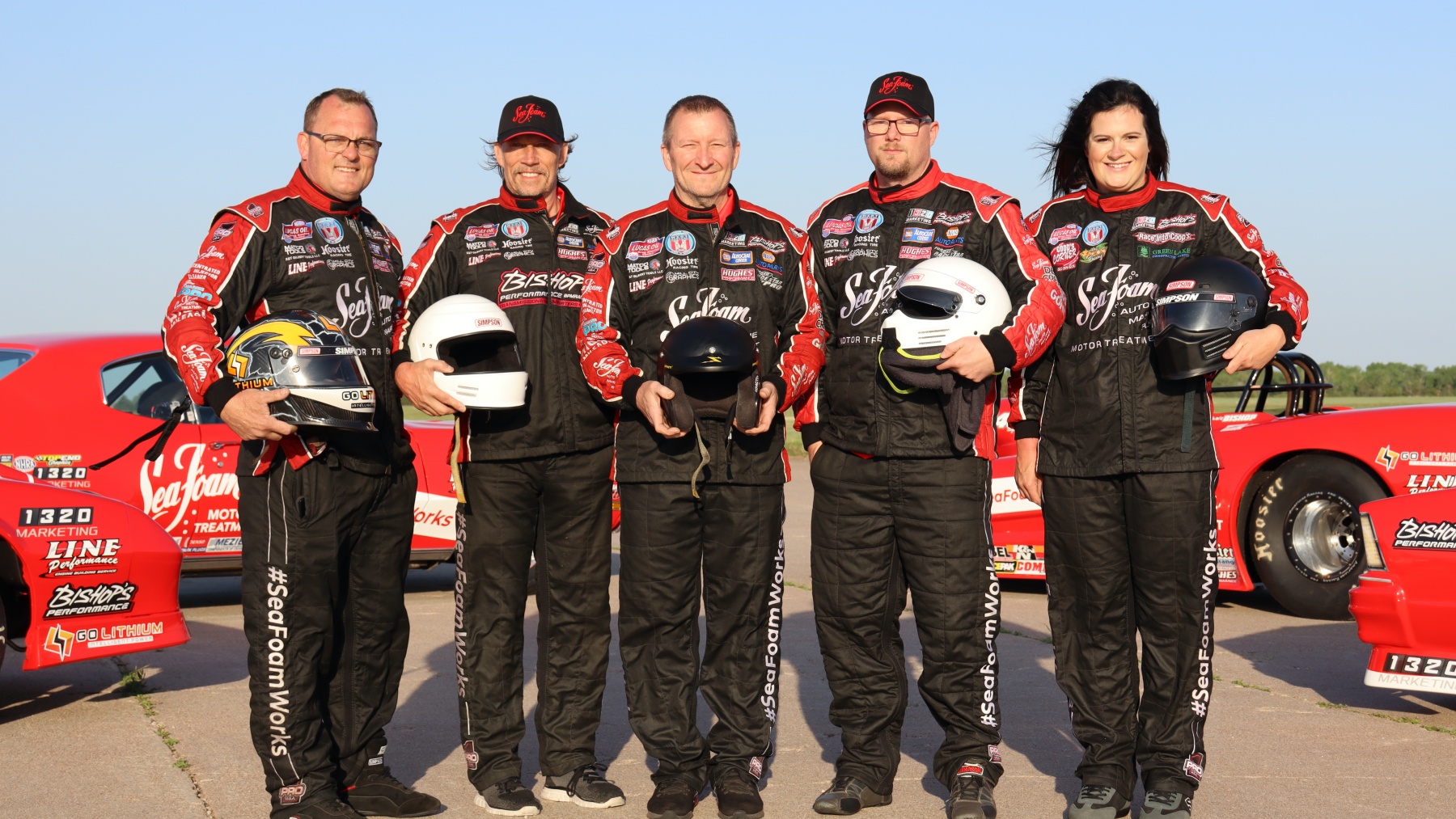 When it was all said and done at the end of the 2022 season, the Bishop’s Performance Motorsports team showed up and showed out in the national and regional points standings with a top 10 national finish, top 15 national finish, multiple top 5 divisional finishes, and made it to the final round at 8 of 18 NHRA races this year.

Going into the first race day of 2022 at Great Bend, KS, the team showed out with all new matching red wraps on each of the race cars in #SeaFoamWorks fashion. Although their branded crew, cars, team uniforms, and pit areas made an impression, they were still working out the kinks during eliminations.

To kick off the final divisional event at the team’s home track in Brainerd, MN, they were awarded Best Appearing Crew for their sea of Sea Foam red crew and driver uniforms. It didn’t take long for the team to start seeing win lights: Chris Bishop made a third-round appearance with his dragster, and Donnie Durenberger Jr, rider of the Sea Foam motorcycle, secured a runner-up finish as well as a third-round appearance in the Camaro.

One month later, the Sea Foam Products team secured their first win of the 2022 season with Steve Stockton in the 1979 Sea Foam Malibu competing in the Top Sportsman class in Denver, CO, while Donnie secured a runner-up finish with the motorcycle. Steve went on to make it to the semi-finals at the NHRA Norwalk National event in Ohio the following weekend.

Their next champagne-spraying winner’s circle celebrations happened in Topeka, KS where Jeff Cheney took the win in the #SeaFoamWorks 1970 Buick. The team was awarded Best Appearing Car for their stunning 1969 Nova wrapped in Sea Foam red, along with Best Appearing Crew for their eye-catching Go Lithium battery uniforms.

Another cake-topping weekend happened for the Bishop’s Performance Motorsports Team in Atcon, MT where Chris Bishop securing not one, but two Wally’s for the double divisional weekend in his 2005 Corvette roadster.

What’s more, the team followed the double win by securing two more wins in the same day with Steve driving the Sea Foam Malibu and Donnie on the Sea Foam motorcycle in Earlville, IA. This was Steve’s final race and the win secured him a 15th national standing and 2nd place in the division. Donnie also completed the year in 3rd with the motorcycle and 11th in the Super Street category.

To finish out a great year, Chris Bishop collected points at the Dallas, TX and Las Vegas, NV NHRA National events to clinch a top 10 national standings finish. He was able to win multiple rounds powered by GoLithium batteries in Dallas, and finished in the semi-finals, gaining enough points for 10th place, his best national finish yet. Chris also placed 4th in the division in the Super Gas category.

With a 10th and 15th national finish by Chris and Steve, and top 4 finishes for Chris, Donnie, Steve, and Jeff in the division, the #SeaFoamWorks Bishop’s Performance Motorsports Team 2022 season was one that will live on in their memories forever.

“This was the best year I’ve ever had,” said Chris. “Having support from Sea Foam Products has allowed us to race more and be more focused on performing well during events. Overall, we had a successful group of drivers with wins in just about every car and earning best appearing car and crew with our outstanding #SeaFoamWorks wraps from Mill City Graphics. We are made up of good people that are committed to make things work; it’s a whole team effort.”

“There is a lot of room to grow in 2023 and we are capable of doing it and competing in the NHRA sportsman world tour with our fleet. We have respectable drivers, eye-catching and professional cars, and continue to grow our presence online, making the Bishop’s team the whole package.”