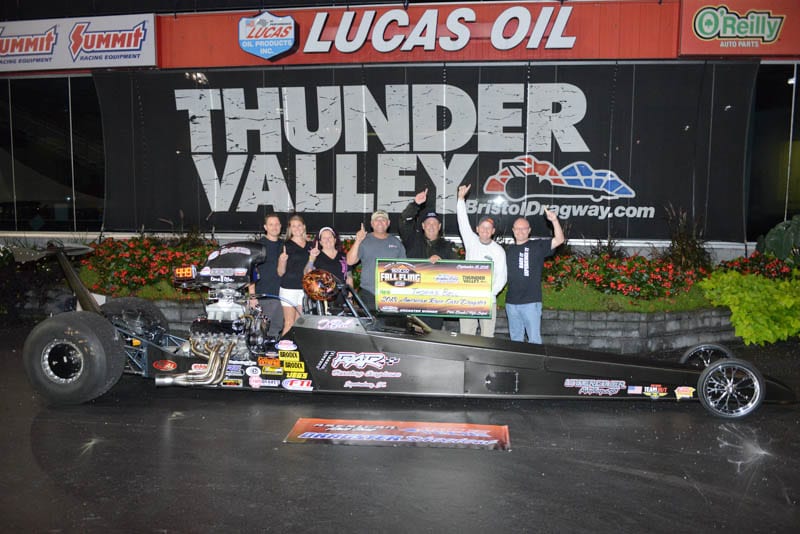 The first day of the Sparco Fall Fling presented by Optima Batteries began a little later than expected as the amount of rain this area received in the last week upset a lot of the race track surface. With a Test & Tune session scheduled to allow racers to become acclimated to the race track, along with the Super Tuesday American Race Cars/Racetech Dragster Shootout, it was still going to be an ambitious schedule. Bristol Dragway crew worked diligently to scrape the entire eighth-mile and re-prep it to the standards both they, along with the Fling staff expects.

With a limited 32-car field for the Dragster Shootout, the winner receives his or her choice of either a new American Race Cars or Racetech dragster with the runner-up receiving what’s left, which in either case is not too shabby a prize. Both of the semifinalist… runner-ups, receive $500 each.

In the quarterfinal round with eight cars left, the combatants are Josh McDaniel, Corey Gulitti, Bug McCarty, John Labbous Jr., Tanner Miller, Thomas Bell, Jeff Taylor and Tim Markoglu. In that round, Markoglu used a dead-on the dial and an .017 reaction time to dispatch McDaniel, Gulitti had a better reaction time to defeat Miller, McCarty turned on the red-light to advance Bell and finally Labbous defeated Taylor.

Semifinal round and with a dragster on the line going to both finalists, Gulitti dispatched former Fling winner Labbous and Bell took out another Fling winner in Markoglu. 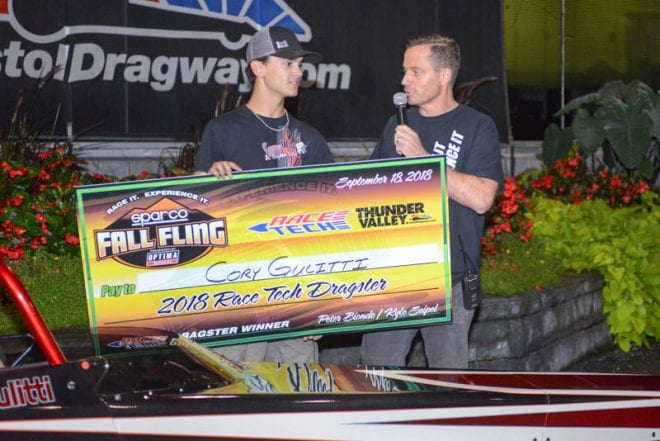 And before the clock struck midnight, it was young versus old in the final with the 17-year-old Gulitti coming off two big wins previously at another event. But Bell was not to be denied, as he used a .006 reaction time to take the win over Gulitti, choosing to go home with the new American Race Cars dragster. Gulitti earned his keep by taking the Racetech dragster with him back to Texas.

Yukon Gear & Axle Warm-up Wednesday begins bright and early with a single time run for all competitors. All of the action is being streamed live as it happens on MotorManiaTV.com thanks to JEGS and Mickey Thompson Tires. Follow www.bracketraces.com for more info and results. And stay tuned for a big announcement regarding the 2019 Tenth Anniversary Fall Fling event later in the week.