Robert Hight is a self-professed lover of baseball and the Los Angeles Dodgers. The 2009 Funny Car champion has raced with a Dodgers-themed Funny Car and thrown out the first pitch at ballparks across the country. This weekend at the 29th annual AAA Texas NHRA FallNationals the 34-time Funny Car national event winner will get the chance to race in his own doubleheader of sorts. 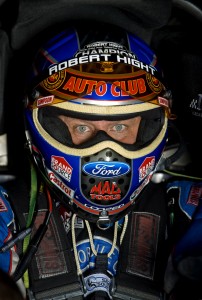 Due to rain and deteriorating track conditions as a result of the precipitation the NHRA moved the completion of the Pep Boys NHRA Carolina Nationals to the Texas Motorplex. The remaining three rounds of that race will be contested on Saturday as part of the qualifying program at the famed all-concrete quarter-mile facility. Fans will be treated to an extra run by the Top Fuel and Funny Car finalist at approximately 4:45 p.m. on Saturday after official qualifying is completed. Hight and teammate John Force are on opposite sides of the elimination ladder and could meet in the final round.

“This is going to be a busy weekend. We will finish the Charlotte race on Saturday and then the AAA Texas FallNationals on Sunday. This is also my sponsor, AAA Texas’ race so we will have a lot of those folks watching. I love it. There is nothing better than a baseball double header in the play-off and now we get an NHRA double header to start the Countdown. We are going to make the best of this tough situation,” said Hight, a two time winner at the Texas Motorplex FallNationals. 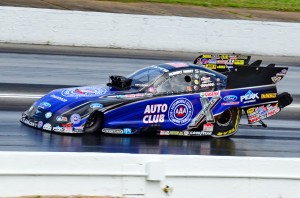 “We have done pretty well in qualifying here. This all-concrete track is pretty awesome. Billy Meyer built the first super track and we love coming to the Dallas area and racing. I am not too concerned with the heat because we have a pretty solid hot weather tune up. In Charlotte on Saturday we were the second quickest Funny Car in both sessions and Mike Neff has a lot of confidence. I feed off that confidence,” said Hight.

The driver crew chief relationship racing is similar to the pitcher catcher relationship in baseball. The pitcher is taking some direction from the catcher and many times it is the catcher job to help keep the pitcher calm or focused. Hight and Neff have a similar relationship and so far this season they have five wins and a streak of six final rounds in a row. Hight has leaned on Neff’s crew chief confidence and Neff has enjoyed having a driver who treats every round like an elimination round and gives him consistent runs to build a tune-up around.

“There are so many things that go into running a Funny Car at the championship level. You need a good driver, a good crew chief, a good crew and then most importantly you need consistency and confidence. We have all those elements over here with the AAA Texas team,” said Hight.